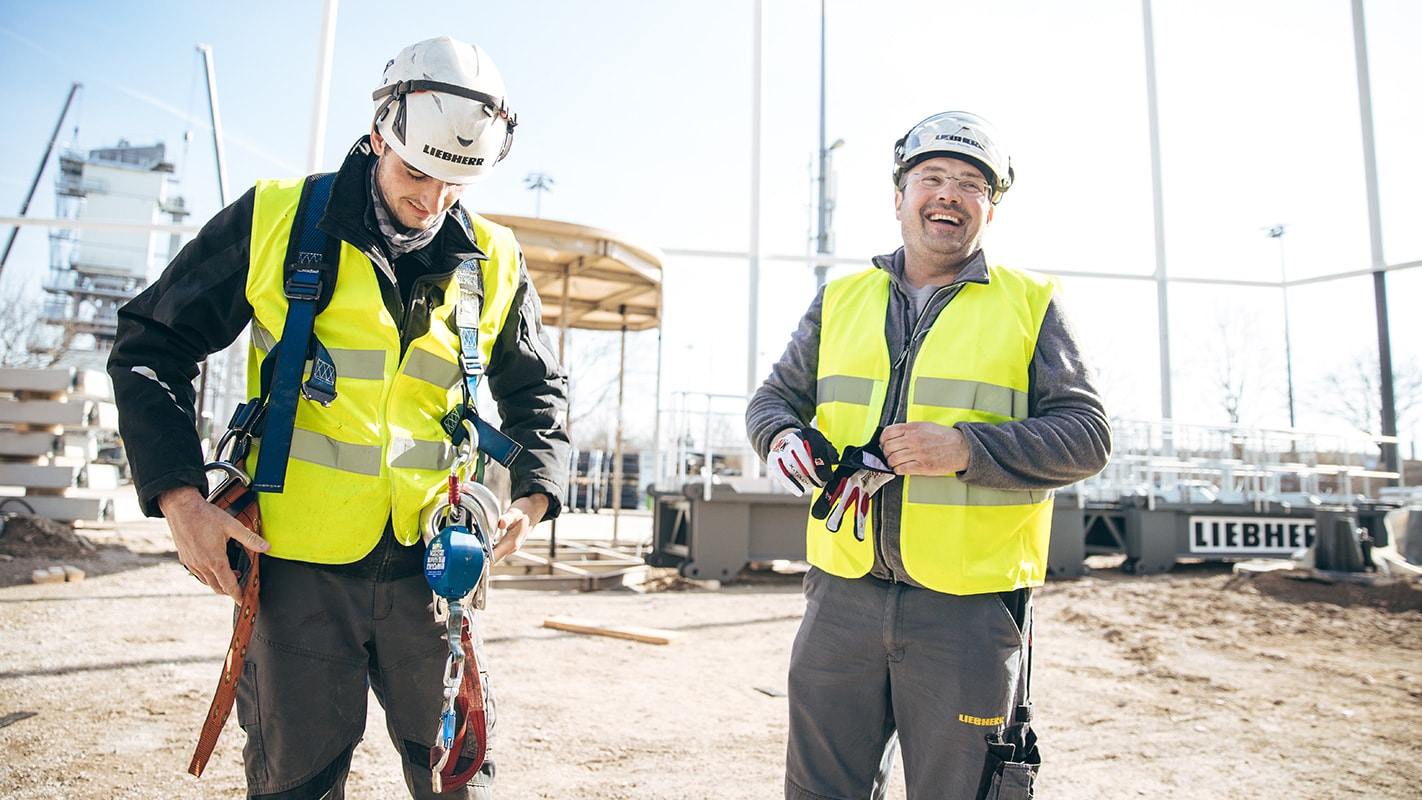 Building one of the biggest trade fair booths in the world is an enormous challenge. A great deal of experience, organisational skill and craftsmanship go into ensuring that Liebherr leaves the best possible impression on visitors from all around the world at Bauma. Having nerves of steel helps too. Head of Construction Werner Haas has all of these traits, but this year he’s also brought in some very special help – his son. 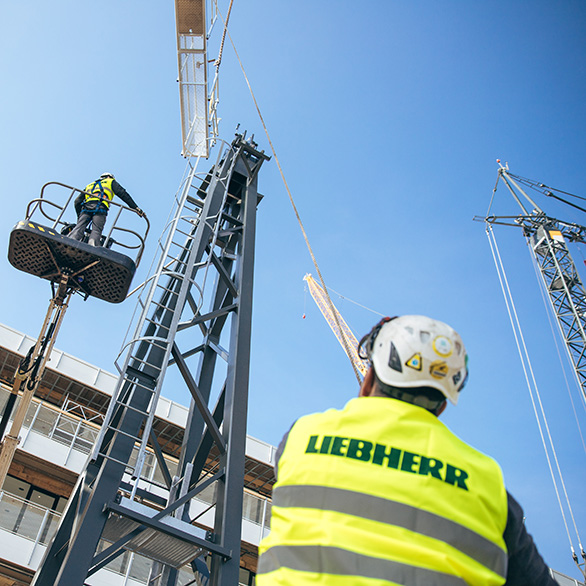 It’s a tricky moment where everything has to fit with millimeter precision. Werner Haas directs the mobile crane with a circular wave of his hand. The cabin slowly descends and the men on the ground turn it until it is in position. Then things happen quickly. The cabin is mounted on the slewing platform in just a few steps. The young mechanic gets the presentation board out from inside. ‘1000 EC-H 50 Litronic’, it reads. ‘It’s better if we leave the board down here’, he says. ‘When the crane is mounted, nobody will be able to read it 45 metres up.’

The man directing operations and the young mechanic obviously make a good team. And no wonder, since they are father and son. Werner Haas, 48, and his son Julian, 21, are both service mechanics at Liebherr-Werk Biberach GmbH. Werner Haas joined the company in 1991 and has been supervising the construction of one of the world’s largest trade fair booths since 1998. His son Julian started an apprenticeship in mechatronic engineering at Liebherr in 2014 and is now a part of the construction team led by his father.

Both men like to roll up their sleeves. One is outside working with machine and crane assembly parts, whilst the other directs operations from his ‘conductor’s desk’, a conference table in a small portacabin where Werner Haas has been orchestrating the various tasks since the beginning of November. This has included managing trade fair constructors, gas, water and electrics engineers, garden designers and landscapers, graphic designers and, of course, the builders of Liebherr’s more than 60 machine exhibits.

We can only succeed if we work together, combining age and youth, experience and a fresh attitude towards innovation.

‘Approximately 60 Liebherr colleagues and 80 of the staff from the trade fair organisation are responsible for achieving the maximum impact for us at Bauma’, explains Werner Haas. ‘I am the interface, the man at the centre of the storm.’ That said, he’s only as good as the team around him. ‘We can only succeed if we work together, combining age and youth, experience and a fresh attitude towards innovation.’

And it isn’t just talk – this is the tenth time Werner Haas has been responsible for the Liebherr booth at Bauma, and he is putting this combination of experience and youthful curiosity and energy to the test. His eldest son Julian was integrated into the team.

‘It was inevitable’, the father says with a mischievous grin. In the past, he would always bring his children models from the trade fairs. They loved playing with them, particularly the eldest. ‘My fascination with cranes, construction machines and Bauma began at a young age’, confirms Julian. Therefore, it was ‘pretty much a given’ that he would choose to do an apprenticeship in mechatronic engineering at the Liebherr plant in Biberach in 2014.

An amateur handballer in his free time, he has since teamed up with Liebherr to work as a service assembly mechanic, working mostly with tower cranes. His responsibilities range from training and instruction to repair and maintenance work. ‘A crane is a wonder in every possible sense’, he says admiringly. ‘It’s incredible how much steel is used.’ If he has time, he likes to pore over the statistical calculations to get a deeper understanding of the laws of physics. ‘Curiosity and a hunger for knowledge can’t hurt’, says the father. 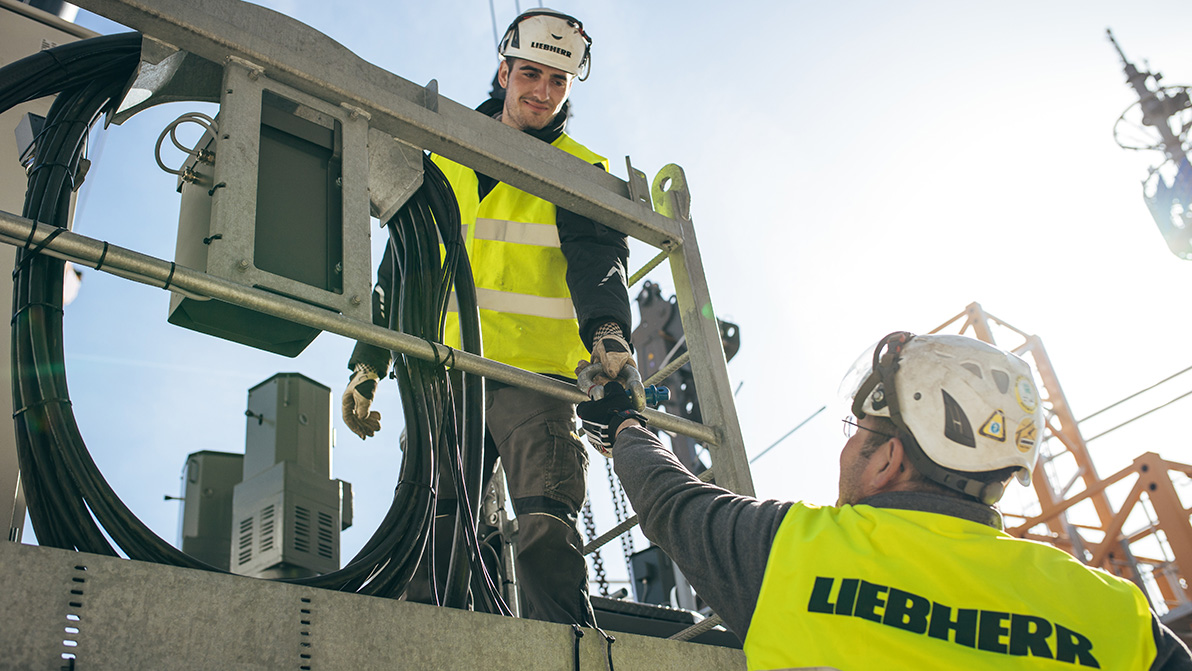 My fascination with cranes, construction machines and Bauma began at a young age.

The pair have already worked together for Liebherr at the trade fair in Paris. ‘That allowed us to get attuned to each other in preparation for Munich and practice particular processes’, explains Werner Haas. But there’s no question of the Head of Construction giving his son any preferential treatment and that’s the way both would have it. ‘It’s a fantastic opportunity to be part of this unique project and work in a really hands-on way’, Julian Haas enthuses. ‘It’s a special job where there’s plenty of scope for me to learn.’

However, work is far from over for the Liebherr team once construction work for the trade fair is done. ‘During Bauma, we are constantly on the go doing demonstrations and maintenance’, explains Julian Haas, full of anticipation. ‘And when the doors of the trade fair close and everyone goes home happily, it’s time for us to get stuck in again’, adds Werner Haas with satisfaction. What takes half a year to assemble has to be dismantled and completely removed in five weeks. ‘And then all the teams have the whole mountain to climb again.’

‘People often ask how we can actually work together as father and son and if there isn’t constant family strife and stress’, explains Werner Haas. ‘Of course, there are occasional differences of opinion. That’s completely normal. But in general, we get on just as well at work as we do at home’, states Julian. In fact, it’s got to a point where the women in their lives tick them off at the weekend. ‘When we talk about work at mealtimes, my wife says that there must be something else to talk about besides Bauma’, Werner Haas explains. ‘And she’s probably right. But the trade fair is a special event that only comes around once every three years, so it’s only right that everything else revolves around it. Well, almost everything.’ 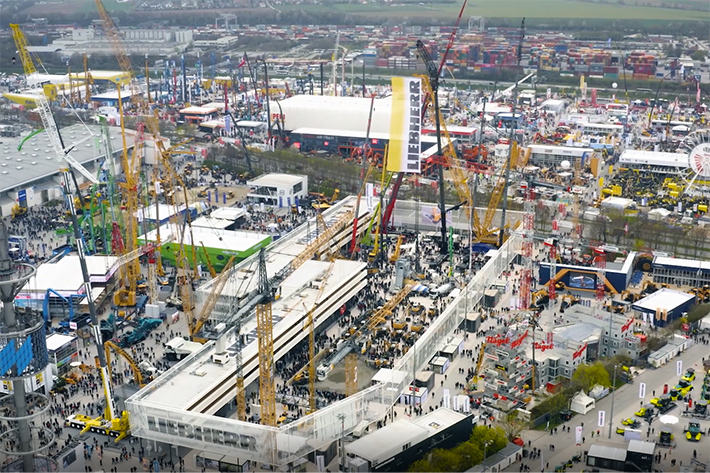 The sky's the limit

The world premiere of the new EC-B series of Liebherr tower cranes marks the arrival of a brandnew generation.

Discover your personal possibilities with the Liebherr Group.

To the career section