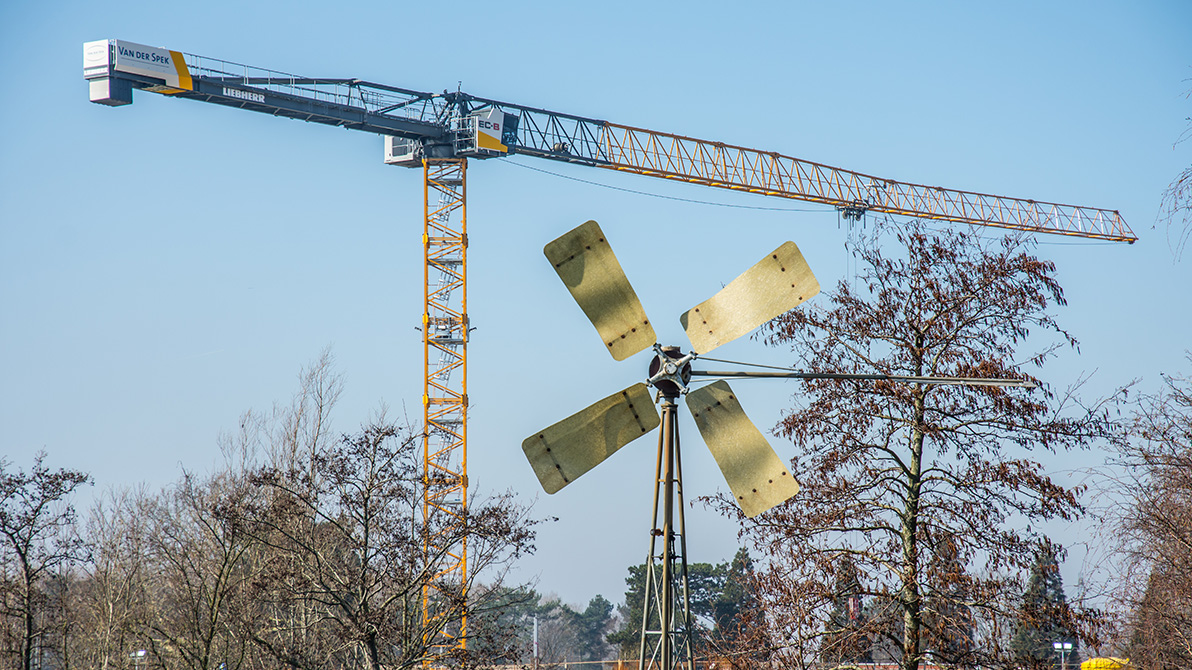 The Sky’s the Limit

The world premiere of the new EC-B series of Liebherr tower cranes marks the arrival of a brandnew generation. These impressive cranes were tried in the field for the first time at a hospital building site near Rotterdam. It was such a special occasion that even the wind made an appearance. 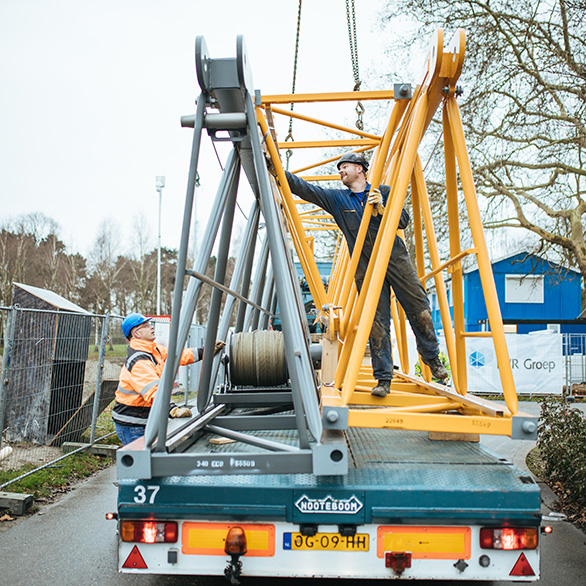 Everything but a routine job

You’d be forgiven for thinking that Poortugaal is spelt incorrectly. But, in fact, we are not referring to the country on the Iberian Peninsula, but a place in the Netherlands approximately 15 kilometres south of Rotterdam. Roel Reinders and Arno Heger would definitely prefer to be in the ‘real’ Portugal on this January morning, which is not just cold but also very stormy. Today the fourstrong team of technicians from the Dutch crane specialists Van der Spek are going to rig a crane on a hospital construction site. And not just any old crane – this is the world premiere of the 340 EC-B from the new Liebherr flattop series.

‘This is just really, really cool and not any kind of routine job. We have to inspect everything even more carefully than usual and make sure we check every handle,’ says Roel Reinders, who is very eager to start the task that lies ahead. Roel Reinders and his team do not appear to be fazed by the mud, rain and icy cold wind. The team are all smiles, outshining anything the weather can throw at them.

It was still dark when the low loaders arrived at 7.30 am, carrying the crane components and the mobile crane. ‘The first special feature was noticeable even when the crane was still on the truck’, explains Arno Heger. ‘Instead of the usual two, there are now three jib sections that fit on one truck bed.’ Liebherr has redesigned many details on the top of the crane for easy transportation and assembly. The EC-B’s compact head, jib and trolley are now even lighter than their predecessors. Furthermore, as the jib is narrower, three jib sections now fit on one truck bed. This means that even the shortest jib can be transported with one fewer transport truck. When the jib is fully extended, at least two fewer trucks are required to transport the crane. The team at Van der Spek greatly appreciate this fact as it saves them both time and money. 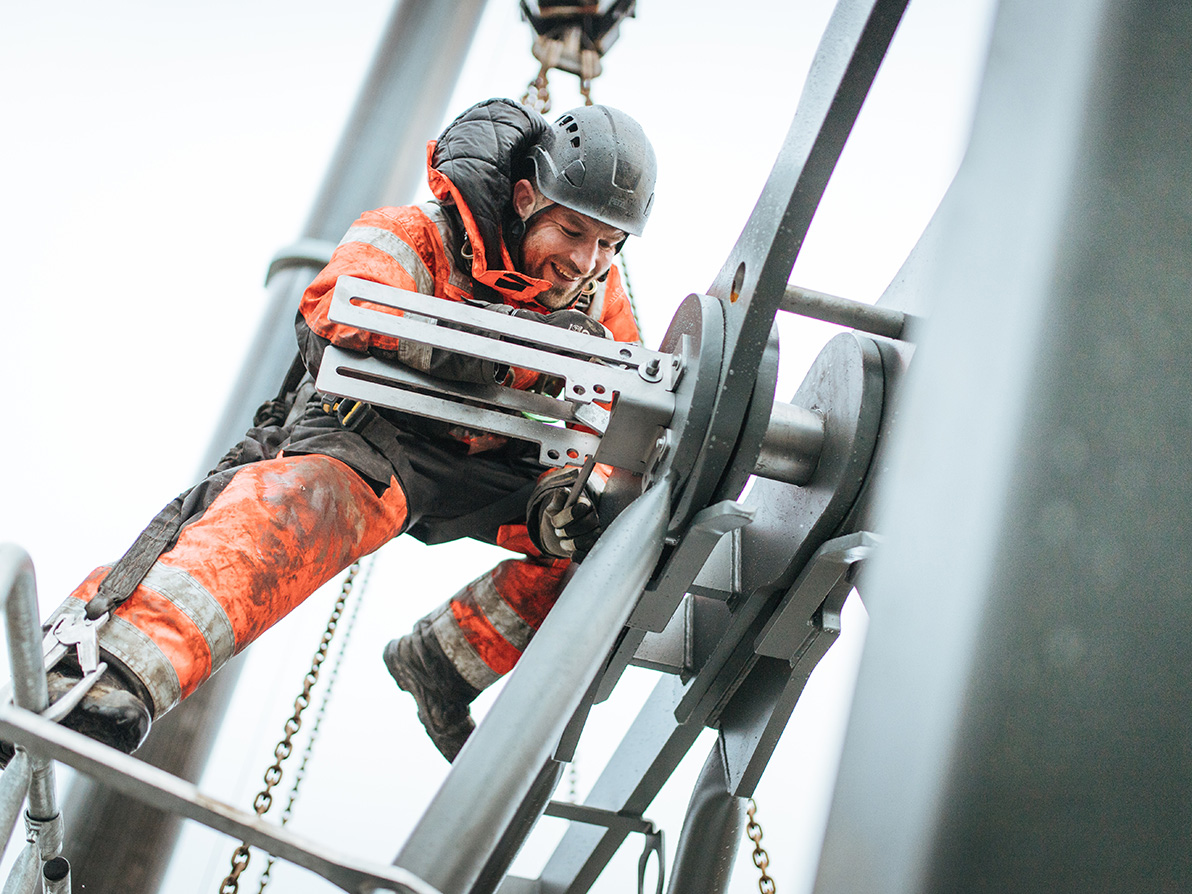 Another detail arouses the interest of the assembly team. The new cranes have also been designed with optimized quick-assembly connections for jibs and counter-jibs which makes assembly even easier and, above all else, safer. However, it is still important that the weather cooperates when assembling tower cranes. Even the best systems will not tolerate too much wind and the jib sections start to sway intermittently when they are lifted from the low loader by the mobile crane. ‘It doesn’t look like we will be able to complete the assembly process quickly today’, Roel Reinders surmises. This means there is more time to focus on the new crane.

The EC-B series includes a wide range of cranes from small city cranes to large material-handling cranes. The maximum lifting capacities range from 6 tonnes to 16 tonnes and the maximum jib head load capacities range from 1.6 tonnes to 2.8 tonnes when working at maximum radius. The largest cranes in the new series – the 340 EC-B and the 370 EC-B Fibre – each have a maximum radius of 78 metres.

Back on the construction site in Poortugaal, the wind has started to die down. But will it be enough to enable the jib to be assembled safely? Meanwhile, the assembly team have expertly constructed the substructure and the tower in no time at all. The slewing platform is also already in position. ‘I have been assembling cranes since I was 18 years old. I am now 36 and I never fail to be impressed by the latest innovations from Liebherr. It is fascinating to see how easy it is to construct the EC-B using the new plug connections’, Roel Reinders tells crane operator Niels Molendijk. ‘You’re going to love it’, he shouts as Niels Molendijk climbs into his new workspace, a warm and spacious cab which allows in plenty of natural light. 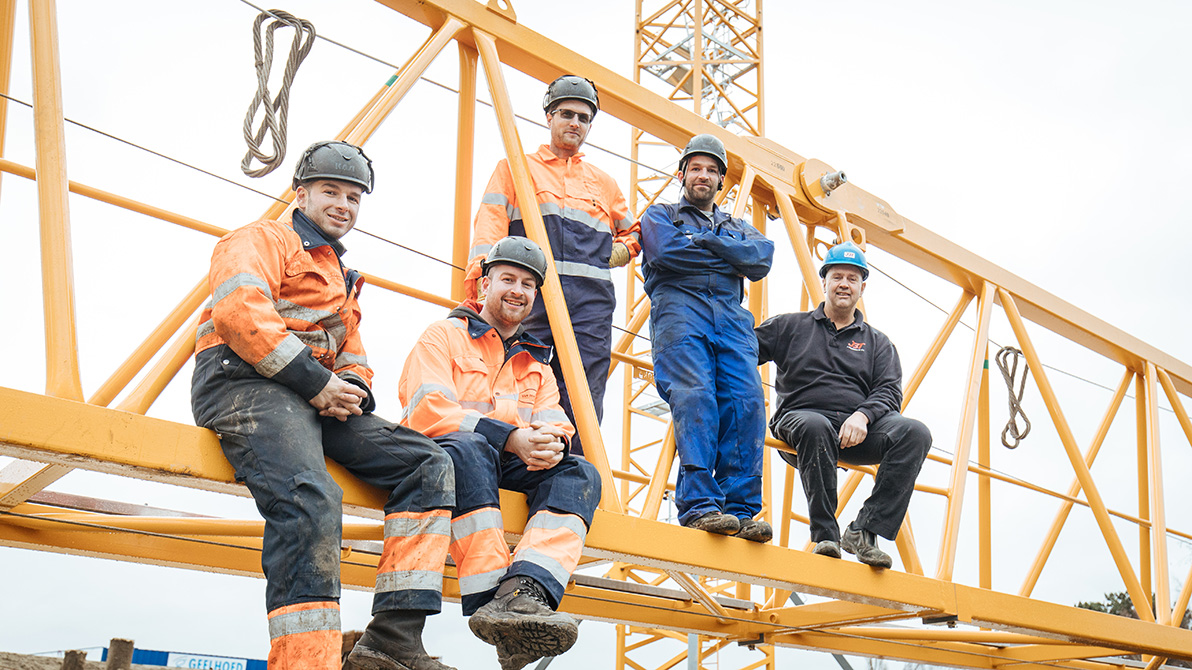 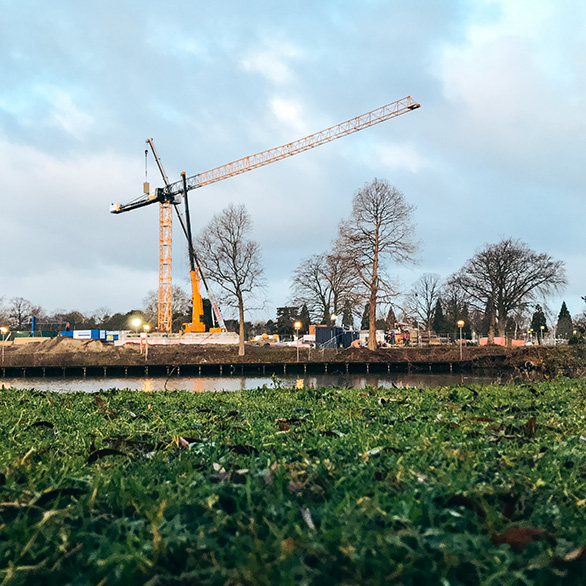 ‘Wow, I’ve never seen anything like it’, 34-year-old Niels enthuses. It is more luxurious, there is more room and a greater field of vision. These are the main standout features on seeing the LiCAB in the new top-slewing crane for the first time. The cab is over two square metres in size and offers more space than previous EC-B cabins. The large windscreen provides Niels Molendijk with alarge field of vision from his seat. Not only can he see the whole construction site beneath him, he also gets a perfect view of the tributary of the Meuse River and far into the distance along the North Sea coastline of South Holland.

In addition to the ergonomically positioned operating controls, Niels Molendijk likes the range of storage areas and surfaces. There are even several 230V sockets. ‘What a luxury!’, Niels Molendijk enthuses. ‘I can make myself a cup of coffee and charge my walkie-talkie.’ There are even USB ports for charging smartphones and a Bluetooth system to make hands-free telephone calls and play music from a mobile phone. Niels Molendijk is amazed. ‘This cabin is an enjoyable place to be. I’m totally blown away.’

The technicians below glance anxiously at the sky. Even though the wind has dropped, the clouds scudding across the sky suggest that the storm is not ready to blow over quite yet. ‘It’s worth a try’, suggests Roel Reinders. The mobile crane lifts the counter jibs. The assembly team swiftly attach the connection above. But will the crane be fully assembled by the end of the day? Unfortunately, the wind picks up again, which makes the last strut element on the mobile crane hooks sway precariously. Roel Reinders shouts ‘Abort!’ into the walkie-talkie. ‘The jibs need to be fully assembled or not at all.’ The sections that have already been assembled are brought down again. ‘The weather forecast for tomorrow is good. We can finish then without the wind and the rain.’ The world premiere of the first 340 EC-B is postponed until the following day. The case is clear for Roel Reinders and his team. ‘Safety is paramount.’ In Poortugaal and everywhere else in the world.

At Bauma, Liebherr is showcasing its prototype LTM 1650-8.1, a new generation of powerful mobile crane. It took three and a half years of tinkering in Ehingen to develop the pioneering innovations that made this a reality.

The new EC-B from Liebherr

EC-B cranes are an irreplaceable part of the Liebherr product portfolio. Flat-Top cranes have outstandin properties, relating to both their erection and transport, and their special design without tower head also means that multiple cranes can work closely together safely on constricted sites.

To the new EC-B