An ode to the crane

What do Liebherr customers and personnel actually do in their spare time? Some of them have crane interests. For example, building an LR 1750 out of wood.

Living for the crane

Or keeping over 1000 collectors items in the attic. All this is by no means just a hobby, it is a passion born of their professionalism and precision. Let us show you behind the scenes at the homes of Torsten Schwarz and Oliver Thum.

Torsten Schwarz, a specialist in spare parts and wooden models

When the journalist’s phone call arrives, Torsten Schwarz is in the spare parts warehouse at Ehingen. As the Control Stand Shift Leader, he has over 100,000 parts which Liebherr customers need for their mobile and crawler cranes. “I’ve held every one of them in my hand at one time or another. After 26 years, I know exactly what the products look like and where they are fitted.” And we could add that Torsten Schwarz can look at all these parts from very close and can also handle them and turn them over, as long as they are not too heavy.

And he has certainly done that with some of them in the project he started in 2018 to create a complete replica. In spring of that year, he took the first step to create one of the 7,805 individual components which, three and a half years later, would form the LR 1750. 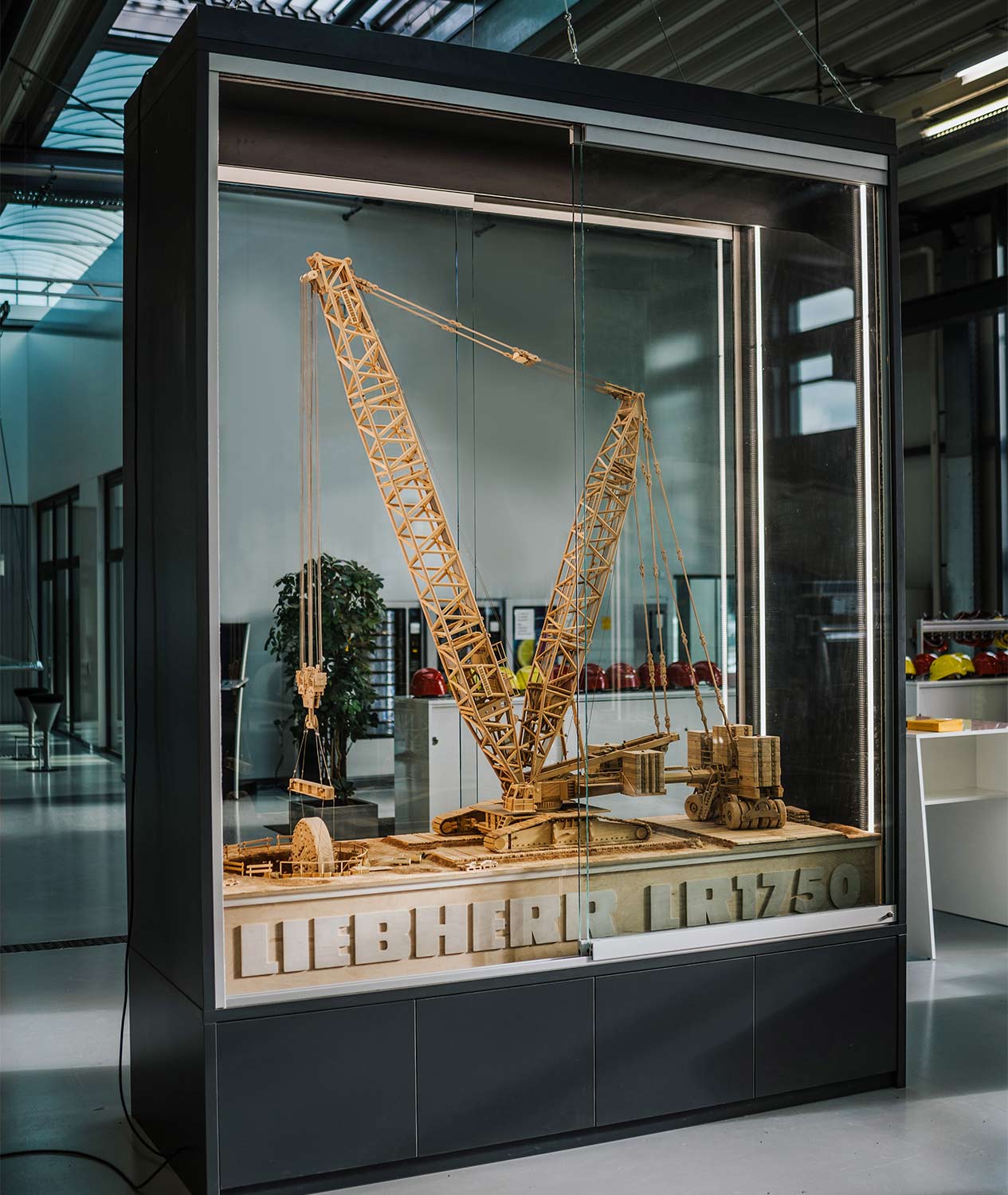 During that time, his workshop became his living room. “If I don’t switch the television on for three months, I don’t have a problem. But my jigsaw? That’s got to be on!” says the trained plastic mechanic, laughing. When you meet the man, you quickly notice that he is a man of action – and a cheerful one. The wooden model took him a total of 785 hours to complete. It also brought him a great deal of knowledge, a dream come true – and tinkering about on the edge of despair. “In spring I was really down and close to throwing the model into the fire. You can make wheels very easily out of wood, but crawler travel gear and chains? Almost impossible!” Four attempts failed, rubber covers were broken by UV light, the wire rope could not be tensioned. Then on the fifth attempt, the whole thing worked. “And I was absolutely euphoric!” It is really impressive when Torsten Schwarz tells you how he has also made other vehicles, pushed the envelope and designed them to be ever closer to reality and accurate.

And that of course is the greatest challenge in this project – design. A crane made of wood is something unique. “The difference between steel and wood is simple – it is possible to suspend the weight of many tonnes on a steel boom. However, building something out of wood that can hold loads is difficult!” Particularly when everything has to be made to scale. Torsten Schwarz chose a scale of 1:20. That means that parts in a real crane that measure 4 cm instead measure just 2 mm in the model. The parts are made of pine and beech with some of them also being oak. “Beech is hard, pine is soft. This means that pine can be easily filed and abraded, but is less strong!” The result is a scale model with a surface area of 60 x 60 cm, 220 cm high, a plinth which weighs 100 kg and a crane which weighs 8 kg. Schwarz actually decided to make this crane model, the 700 tonne LR 1750 with a 42 m boom totally by chance: At the time, there happened to be one standing in the yard. That meant that I could study the details closely and take photographs which you would never guess from our design plans.”

When you’re building a model you realise that our designers had all sorts of thoughts relating to every detail!

His conversations with colleagues in the training centre were also helpful, particularly those involving tricky questions. “At what angle are the lattice sections installed? What is the reeving sequence using the rope pulleys? What load case is suitable for this crane configuration?” According to Schwarz, he now understands many of the products better. “When you’re building a model you realise that our designers had all sorts of thoughts relating to every detail!” It is these colleagues who are now giving admiring looks to the glass-fronted cabinet at the Meeting Point in the training centre.

It is these colleagues who are now giving admiring looks to the glass-fronted cabinet at the Meeting Point in the training centre. Crane fan Schwarz was delighted to put his masterpiece on display there. “It’s the perfect place because the people who will look at it there are the ones who operate and understand these machines. To be honest, I am also happy to have a bit more space in my workshop again!” The relocation to “home” was straightforward as the crane, like its big brothers, can be dismantled into individual components for transport. Naturally, the chains move, the boom can be raised, lowered and slewed.

So what next? Now it’s winter, the workshop is cold and the television is working. But there is no chance of him suffering spring fatigue: “On my next project as well, I’ll be in the workshop sometimes at half three in the morning. When I get going on something, I simply can’t stop!” 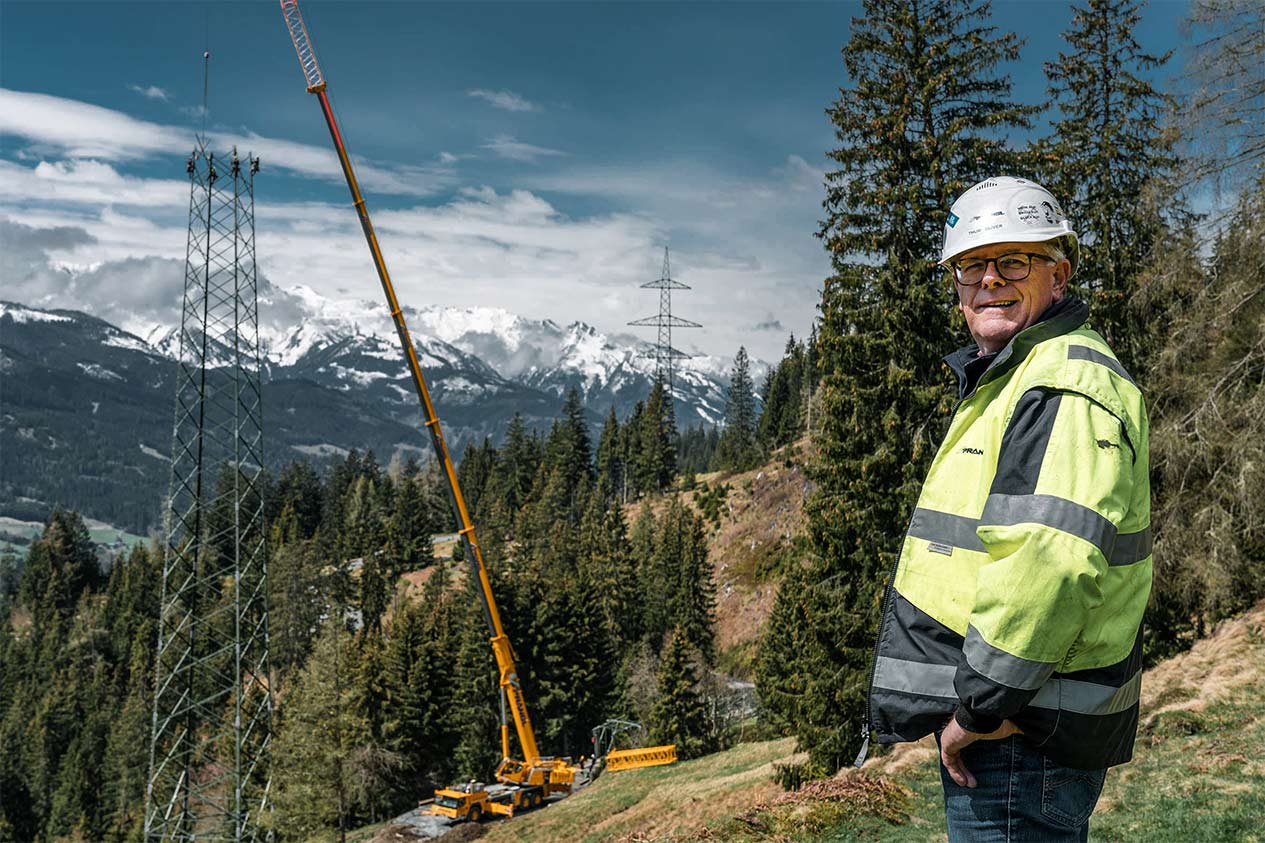 Give up? Not an option!

Another person who cannot or will not stop is Oliver Thum. That applies both to his job, in which he plays a leading role in Austria’s crane and construction industry, and to his collection activities. The trained crane builder is responsible for External Technical Service at Prangl in Tyrol and coordinates some interesting sites for the renowned crane and lifting platform rental company. During his career, he has given a helping hand in the development of several crane prototypes. “When I was 25, I was able to drive what at the time was Liebherr’s largest telescopic crane at Schmidbauer in Munich. On this 800 tonne crane, you sat at the bottom end of the vehicle which had a maximum height of 150 m, from were you could hoist enormous loads around the place which required nerves of steel.” He worked on the biggest sites in Europe for 20 years. He was even involved in the underground construction of CERN in Geneva – he was one of two crane operators who lowered components weighing 350 tonnes to a depth of 50 m for the world’s largest particle accelerator.

A life with the crane

Training as a crane builder and operator essentially saw Oliver Thum continue along the route that had started when he was a child. At the time, he accompanied his father, the owner of a crane contracting firm, to many sites such as the construction of the Brenner motorway. “Sometimes I travelled back at night by taxi because my father had to stay.” When you talk to the man approaching his 60th birthday, his clear voice and precise wording quickly show you that a life full of sites must be wonderful, challenging, educational and simply fantastic. And the whole thing continues in his attic. An attic approaching bursting point. With model cranes. Crane models. The first one he received from his father for his 2nd birthday has been joined by well over 1,000 more. “The rather gloomy 80 square meters contains all types and sizes including a few construction machines and heavy haulage vehicles. The collection also contains a few publicity models in the original paintwork which you get either direct from the crane contractor or from model makers.” Whether it takes luck, or contacts – the main thing is getting the crane. For example, he received a gift of a telescopic crane he had helped to develop to celebrate its 30th anniversary from Taiwanese model maker YCC in original Schmidbauer livery. “It is the number 1 of 200. With a certificate number!” Oliver Thum’s pride shines out clearly on the telephone. His pride is driven by passion, a passion which often leads him to opening his doors at his home town of Rum near Innsbruck. “Come round if you’re in the neighbourhood!” Many people have taken up this invitation. In addition to acquaintances and customers, they include all the leading model manufacturers such as Conrad, YCC and WSI. “Even Liebherr personnel have visited my attic!”

To Liebherr, with Liebherr

Tyrol-born Thum came to Liebherr in Ehingen as an apprentice in the German autumn of 1977, a time dominated by terrorist attacks by the Red Army Faction. He was just 15 years of age, travelling alone on the train with wanted notices in every railway station. “I trained as a machine fitter, became fully involved straight away and even after I had finished my apprenticeship, I worked for two years in the Repair Department.” Almost half a lifetime has passed between then and now, involving many generations of cranes. When Thum talks, it sounds more like a revolution than evolution. “1977 and now – they are worlds apart. At the time, the 110 tonne model was Liebherr’s largest telescopic crane with a 45 m boom length and we were simply unable to imagine a lifting capacity of 800 or even 1,200 tonnes for a telescopic crane. We all thought it was phenomenal when a lifting capacity of first 160 and then 200 tonnes became possible in 1980. The boom length was 55 m, a 100 m boom like today was inconceivable!”

Painting models in company liveries, was pretty standard even then. Because there are so many models which do not have the original paintwork, Oliver Thum regularly works as a crane builder in his attic. “I dismantle the standard model in yellow, modify it, refine it, pickle it and then paint it.” Naturally, none of this involves guesswork or inaccuracy, it is all done with absolute crane precision. “Collectors only use the original RAL colour, and then the signwriting is made precisely to scale and affixed.” 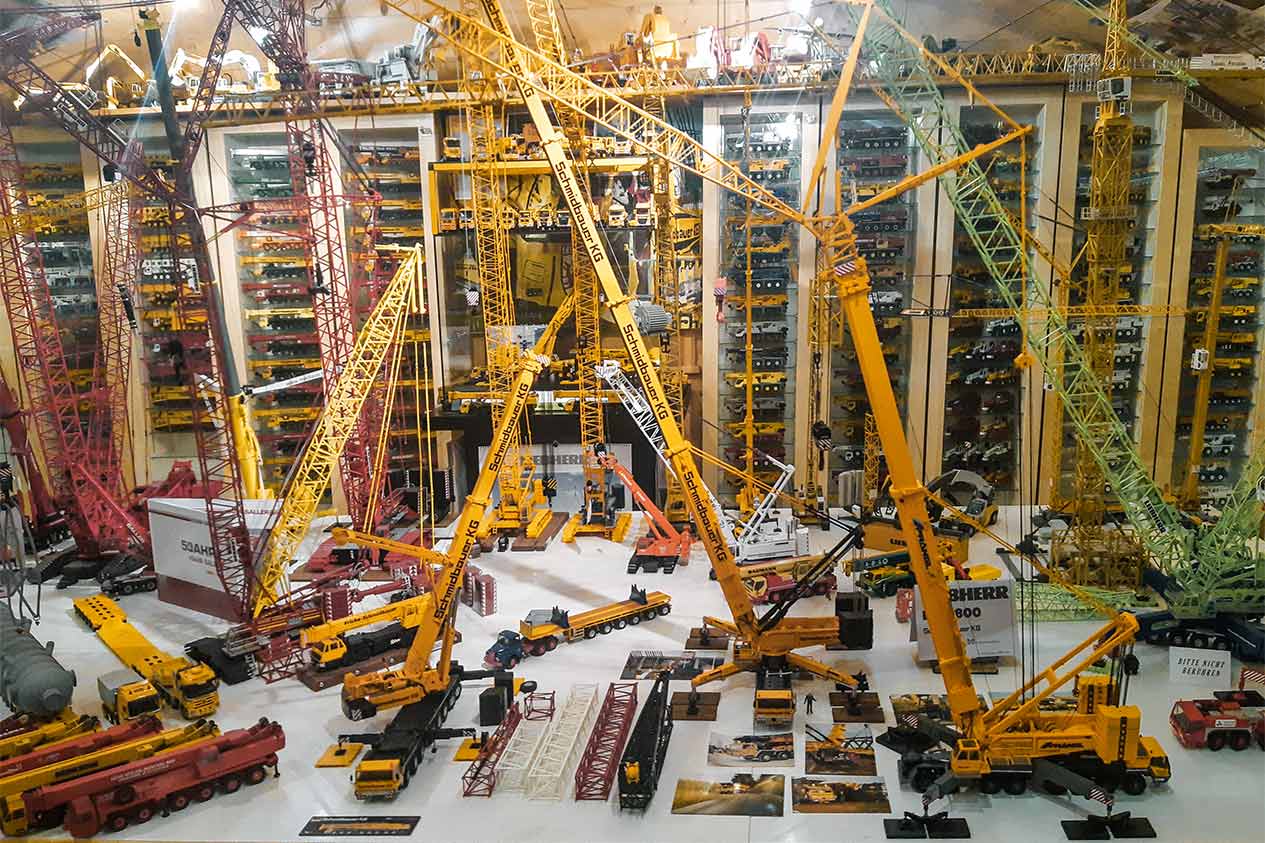 He used to make lots of models with Lego, but now he continually checks his vast to ensure everything moves correctly. There is less and less space available, although he has plenty of scope in his house. This may change, however, if he starts looking longingly at his daughter’s room when she moves out shortly. “I think I would have to do a lot of work to really convince my wife,”says the crane fanatic laughing

Until then, he will continue to collect, paint and drive to the annual get-together in the Netherlands. That event sees a gathering of passionate collectors from all over the world to swap models and show off others they have built themselves. One good thing for Thum is that when there is no model in sight or the attic is too warm, he can sort things out himself. Recently, he even manoeuvred a crane again and during our phone call he was travelling to his current project, a major site near Salzburg. Just before he arrived, Thum shared a story of bright pink crane romanticism involving large crane contractor Franz Bracht, based in northern Germany, whose owner Dirk Bracht is himself a collector of models and genuine vintage cranes, giving his daughter an original pink crane to celebrate her birth. Thum also has a pink crane in his glass-fronted cabinet – of course he has. What he does not yet have, however, is the blue one that Bracht gave as a present to his secondborn. So a new crane is likely to be added to the collection at any time!

This article was published in the UpLoad magazine 01 | 2022.