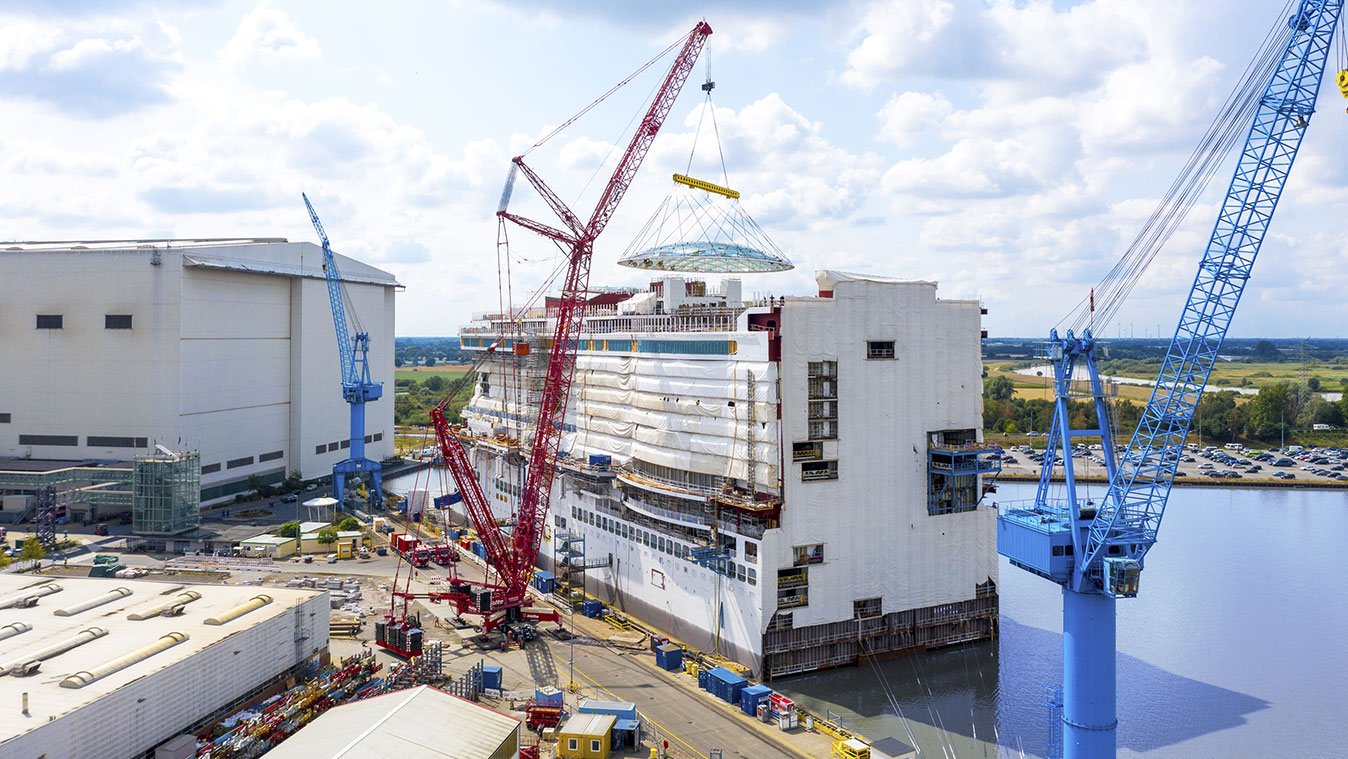 Because the demand is not just for more, but ever larger ocean-going giants which can provide accommodation and pleasure for as many as 6000 passengers, some shipyards are slowly coming towards the limits of their capacities. This means that shipbuilders are becoming increasingly reliant on mobile cranes. A shipyard report from Emsland. 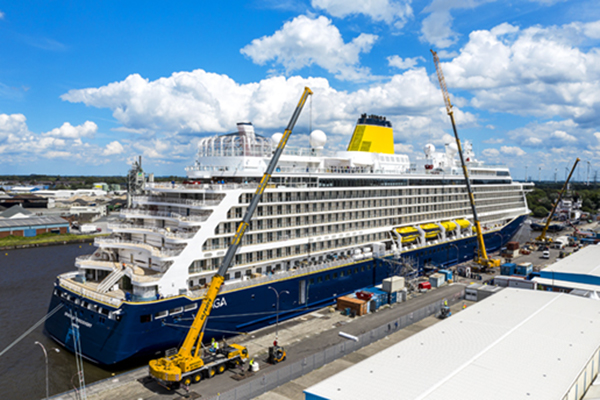 The finishing touch – three Liebherr mobile cranes from Ulferts GmbH hoist material on board a completed Meyer Werft luxury liner in the harbour at Emden.

The little town of Papenburg is right up in the north of Germany, just a few kilometres from the Dutch border. This is where, 50 kilometres from the coast and only linked to the North Sea by a river and a wide bay, you will find the massive buildings of the traditional Meyer Werft, which can be seen from miles around in the flat landscape. The shipbuilding business was founded in 1795, launched its first cruise ship 35 years ago and is now one of the global players in this booming segment. And although the eager shipbuilders in Emsland have the largest covered construction dock in the world, the business appears to be bursting at the seams. Because the building, which measures over 500 metres in length and 75 metres in height, is often too low for the ocean-going giants, the high components such as funnel casings and antenna systems are increasingly having to be installed in the open air. Furthermore, the time pressure in the construction docks is so great that the floating sections, which are up to 140 metres long and are later assembled to produce the luxury liners, are often guided out of the docks and completed outdoors.

This is where large mobile cranes come into play. For many years, crane service providers Gertzen and Ulferts, based in Lower Saxony, and their mobile cranes have been providing support to the Papenburg-based shipbuilder with the construction of their “floating towns”. “Nowadays we take our large cranes to the Papenburg shipyard around three times a year”, says Managing Director Wolfgang Gertzen, whose company provides crane and heavy haulage logistics services from its headquarters in Kluse, 20 kilometres away. Ulferts cranes are also frequent visitors to the shipyard site. Generally, several mobile cranes are in action at the same time, working on the final phases of a finished luxury liner, shortly before it is handed over to the customer. For the first time this summer, an LG 1750 lattice boom crane, operated by Nolte-Autokran based in Hanover, made its way through the Papenburg works gates. 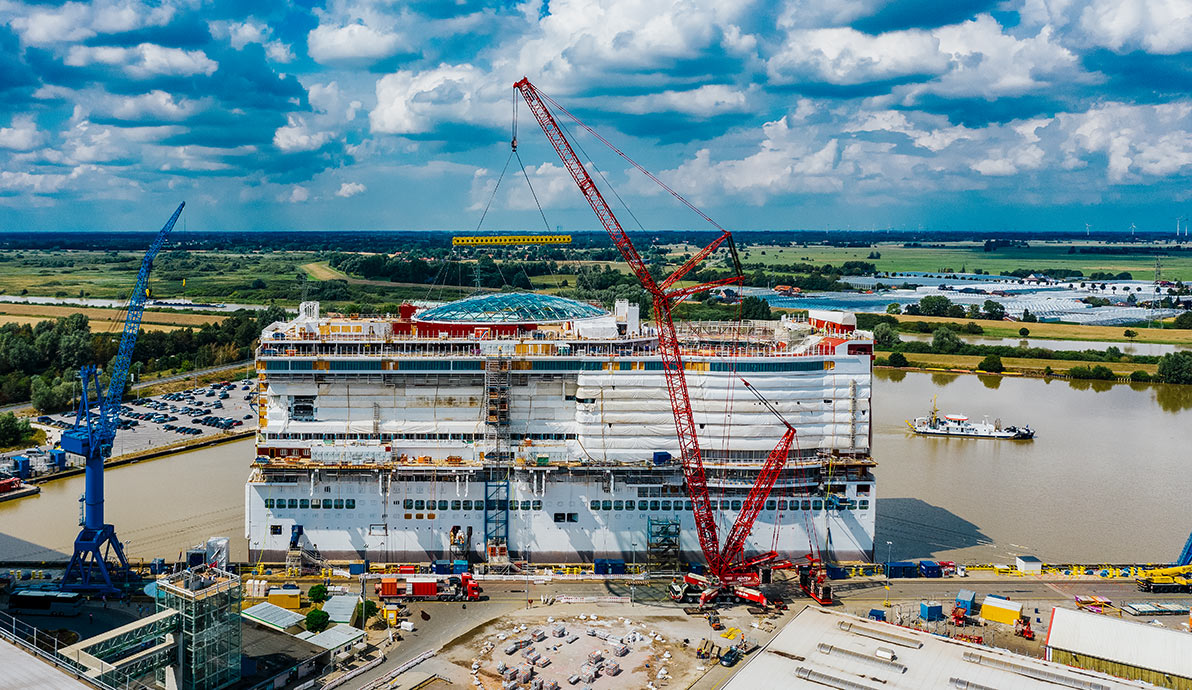 A large glass domed roof measuring around 1000 square metres had to be installed over the pool on the sundeck in one of the centre sections of a vessel. This job was certainly not an everyday event and proved to be extremely complicated. To prevent damaging the filigree dome structure, which is made up of 340 separate panes of insulated glass, its weight had to be spread evenly over 20 fastening points. It took hours before the curved, oval glass roof was finally suspended on the lifting tackle and levelled using the special cross beam. Hoisting the domed roof with a gross load of 138 tonnes was almost simple by comparison. The hoisting process took less than half an hour before the installation workers could secure the free-standing glass dome on its supports on the ship section. 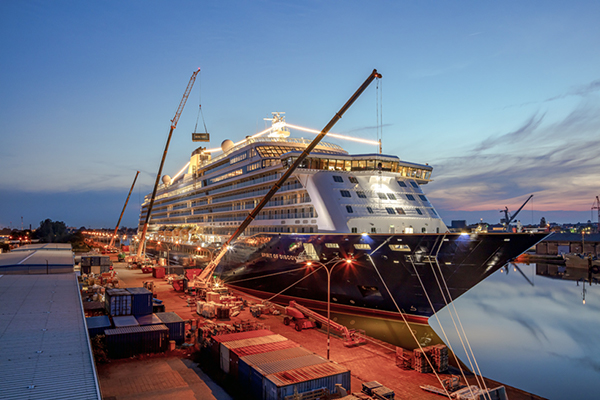 The general fitting out team required space parallel to the set-up areas for the cranes.

In action for decades

The frequency of jobs for mobile cranes at the Meyer Werft site is rising steadily. The shipbuilder’s plans for the future include handing over three finished ocean-going giants per year to its customers in Papenburg. During the 1990s, only around one cruise ship per year was actually launched there. This high ship output is made possible by a highly complex logistics system with a sophisticated build strategy, 3500 works personnel and hordes of workers from external service providers. And, of course, the frequent use of our modern cranes on the works site.

For decades, Liebherr mobile cranes have been hoisting heavy or large elements onto cruise ships shortly before their completion. If the strict timetable of the shipbuilders so demands, the crane operators and their teams will even work in darkness. Four years ago, two LTM 1750-9.1 cranes had to position the funnel casing on the “Anthem of the Seas” during the night, as the delivery date for the ship, which can accommodate almost 5000 passengers, was imminent. And even in the construction docks, Ulferts or Gertzen mobile cranes are very welcome helpers, taking the strain when the shipyard’s own gantry cranes simply cannot keep up with all the work. By Papenburg standards they are small, but important assistants in the logistical masterpiece of building cruise liners in Emsland. 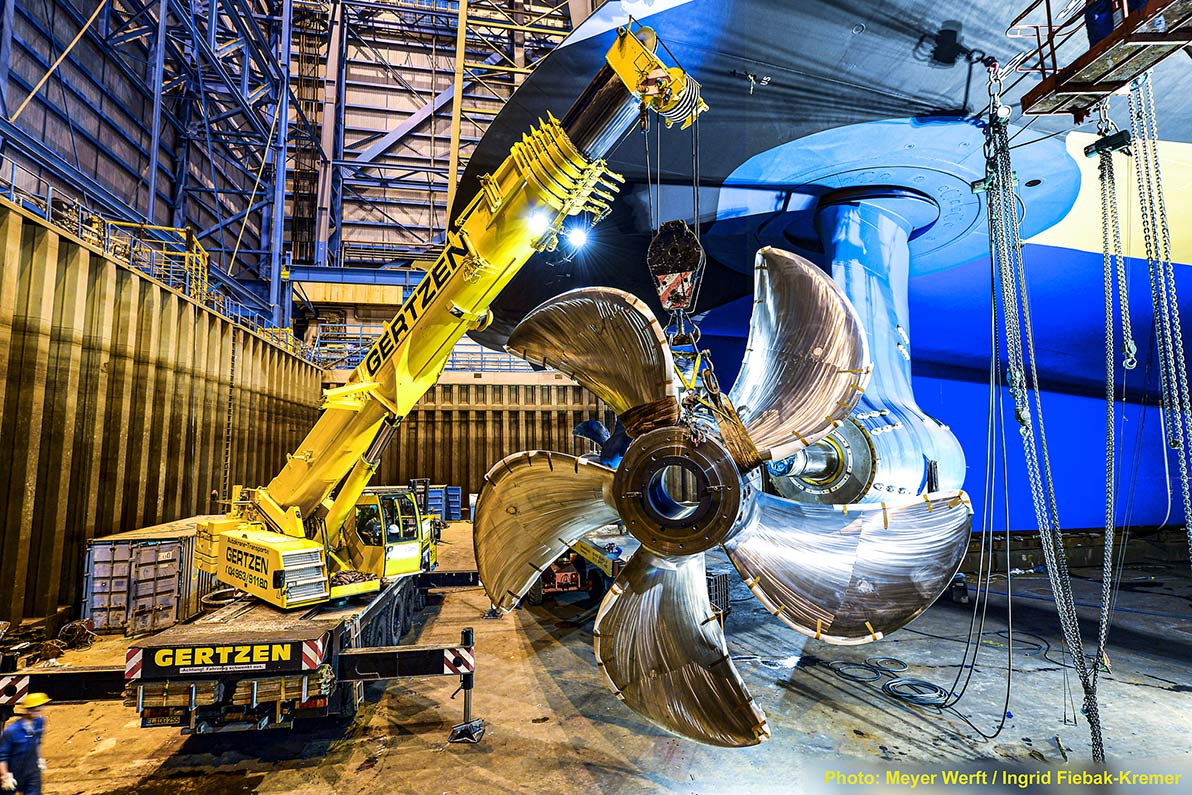 Urgent work in the construction dock – when time is at a premium and the gantry cranes are working on other things, an LTM 1130-5.1 has sometimes had to install the enormous ship’s screw.