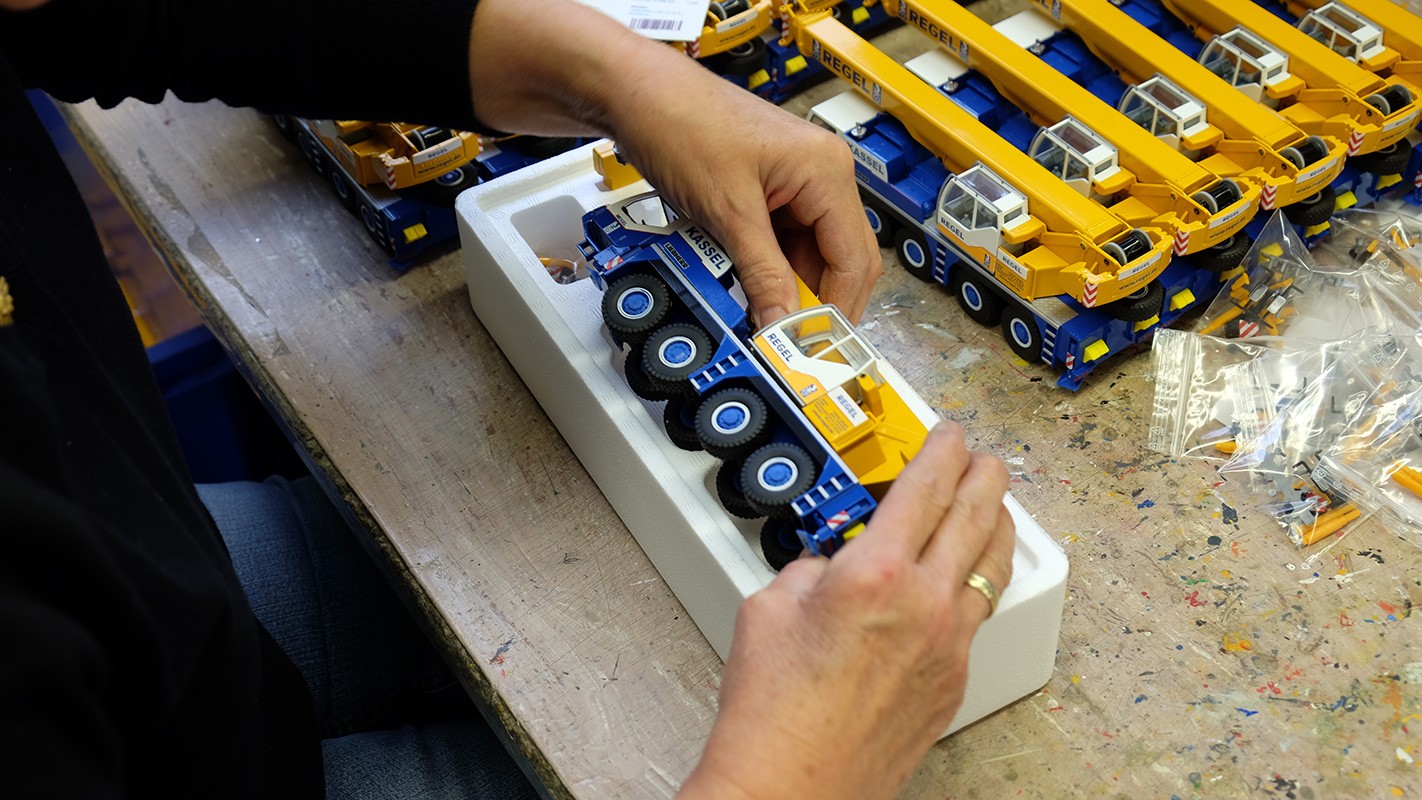 The fascination of models

From really big to absolutely tiny. The world of models has a particular attraction and fascinates almost everybody. Models of all types of vehicle are particularly popular. Bavarian company Conrad was one of the first professional model making companies and has been producing models for Liebherr for almost 50 years. In an interview, Günther Conrad and his daughter Christine give us an insight into the world of miniatures. 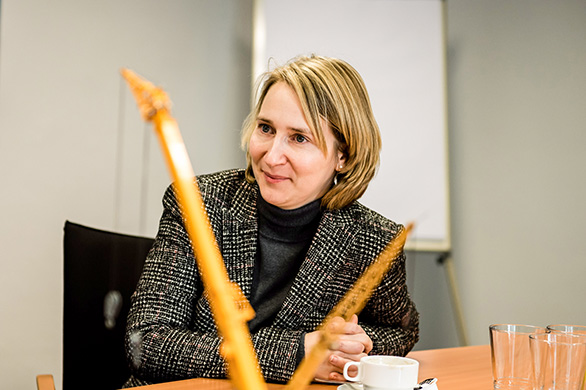 Mr and Mrs Conrad, you grew up in this industry. Can you explain in a few words the attraction and passion for model vehicles?

Christine Conrad: I think the fascination is that models are a source of calm. I can hold the model, get a feel for its weight and its contours, I can look at its functions and its details. Models take you to a whole new world. They are toys, but very special ones. Models can slow life down. At the same time, one of the attractions is that you can look at the entire machine in miniature at a glance. Where the models are of large machines, it is very imposing how long for example the boom is even when it has been reduced to the scale of the model. The boom on the LG 1750 model, for example, reaches a height of 4.20 metres. It is very impressive that the whole thing actually does not tip over.

Günther Conrad: There is also the passion for collecting models. Enthusiasts even regard the model packaging as being a high value item since it is regarded as an integral part of the model itself. Many fans keep their models in the boxes and whilst they take them out to look at them every so often, they do not actually build them.

Please tell us a little bit about your company and its history.

Günther Conrad: My father Ludwig Conrad started the company in 1956 in Kalchreuth near Nuremberg manufacturing electrical components. Initially he also produced electronic model railway accessories as a hobby. In 1970 he then took over the long-established Nuremberg toy company Gescha which specialised in metal toys. The product range already included a model of the Liebherr R 961 excavator which was painted in bright colours for the toy market, but only enjoyed moderate sales success. Conrad changed the colours and painted the model so that it looked identical to the full-size version. And that proved to be a success – the toy became a collectors' item. Conrad was one of the first companies to enter this market – with Liebherr as a major customer. 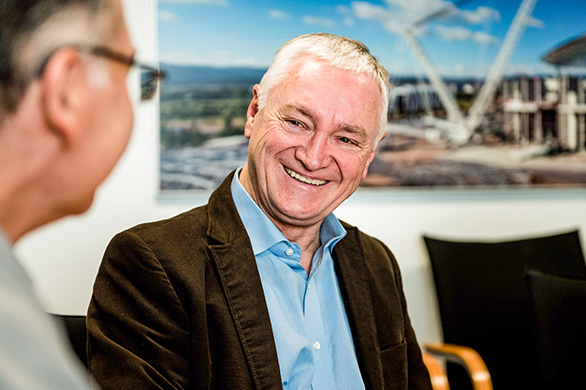 Mr Conrad, when did you finally join the company?

What are the special features of your company?

Christine Conrad: All models are of very high quality and functional. We value quality very highly. They are robust, have realistic functions and can also withstand the stresses of children's hands. At the same time we design and to be realistic with lots of fine, sophisticated details.

Günther Conrad: In contrast to other manufacturers, at the end of the nineties we did not relocate our production plant to China, and instead we made a conscious decision to remain in Germany. We have two companies in Kalchreuth which do all the work, including design, mould making, zinc die casting, painting, production of the plastic parts and assembly. We opened an assembly plant in the Czech Republic in 2010, which supplies us with low cost, high quality labour. Our 90-strong workforce are all passionate about their work. 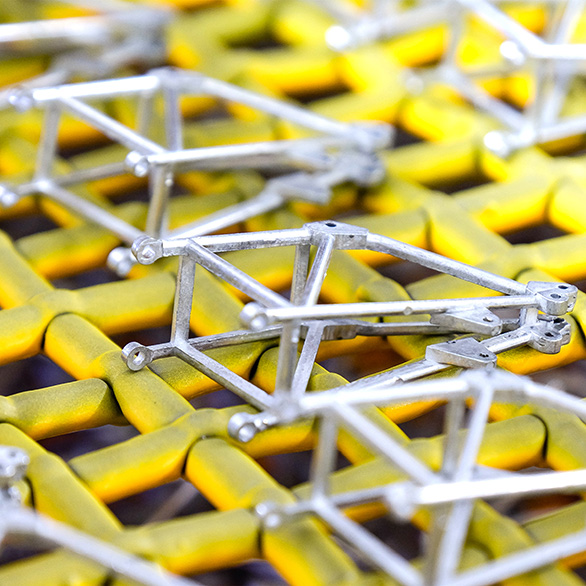 Can you give us a few insights into the model production? How they are produced and using what materials? What are the challenges in the process?

Günther Conrad: Most of our miniatures are made of diecast zinc. Zinc is a natural material which gives the model its weight and the feel of a robust construction machine. One disadvantage is the fact that the parts cannot simply be clicked together and instead have to be pinned, riveted or bolted. The production of every component requires a mould consisting of two halves in which the material is pressed using very high pressure.

Christine Conrad: The design is based on the original 3-D data for the machine. However, the data cannot simply be reduced to the required scale and instead has to be redeveloped and restructured. Our designers adjust lots of details manually to give the model an appearance identical to the full-size machine. An example: A plate thickness of 2 millimetres on the original machine cannot simply be reduced to the required scale since a minimum thickness of 1 millimetre is required for the die casting process. This means that the proportions change and the model must be redesigned so that it looks right.

And what sort of relationship do you have with Liebherr? What was the first model for Liebherr and what is the latest one?

Günther Conrad: We have had a close partnership with Liebherr for almost 50 years. We are always delighted to make something for Liebherr and attempt to comply with all their wishes. In return, Liebherr helps us if we need anything. We have a direct, open and honest relationship with Liebherr.

Christine Conrad: We made the first crane for the Liebherr Plant in Ehingen for the Bauma in 1977. That was an LT 1100. The latest crane is a rough-terrain crane, the LRT 1100. The 1070-4.1 is a bestseller. We make it with over forty different paintwork versions for different customers. 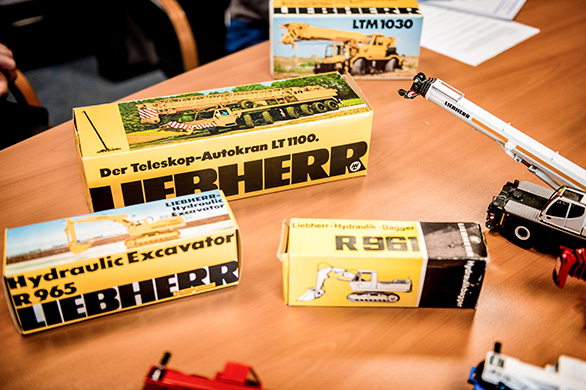 Models with special paintwork are often highly sought-after. What are their special features?

Christine Conrad: Special paintwork often has its own attraction and really catches the eye. For customers, too, it is very important. One has have to be aware, however, that models are produced on a mass scale. Special paintwork, adjustment processes, colour sampling and the like mean additional costs. The plastic parts also have to be specially finished in the appropriate colour. If a customer purchases 100 units we can offer special paintwork if we can incorporate the production run in our series production. If we cannot do the two together due to deadline pressure, the minimum order quantity is 250 units.