The Liebherr LTR 1060 telescopic crawler crane from Swiss crane contractor Clausen has already demonstrated its outstanding off-road capabilities many times. The LTR 1060 has now completed another extreme tour at an immense altitude of 2900 metres. It was required at the foot of the Matterhorn to help construct the mountain station for the new Hirli chairlift. The experienced team from Clausen and the Liebherr crane overcame the challenge with ease using its alpine experience and outstanding crane technology. 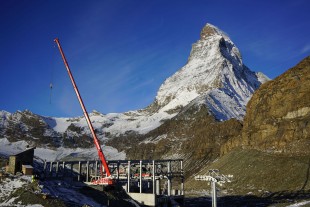 The LTR 1060 telescopic crawler crane from crane contractor Clausen is used to excursions into the adverse conditions of the Swiss Alps. In autumn 2014 the 60-tonne machine was driven to an altitude of 2,020 metres, overcoming steep inclines and gradients of up to 40 percent. At the time it was used for construction work on a mountain railway tunnel. Liebherr provided support for the crane job with extensive calculations and technical advice.

With this experience behind it, the Clausen team started the planning work for this new job: a crane was needed for the erection work of the mountain station for the new Hirli chairlift in Zermatt. This was being built at an altitude of 2,900 metres. Once again the biggest challenge was gaining access on unmetalled hiking paths.

Clausen transported the crawler crane to Stafelalp at an altitude of 1,900 metres on a compact low loader in mid-September. From there the LTR 1060 had to cover the rest of the distance of eight kilometres on its own. The biggest hurdle that the Liebherr crane had to overcome was a stretch of two kilometres with a gradient of 45 percent. After around five hours the LTR 1060 and the Clausen team finally reached the site at an altitude of 2,900 metres. 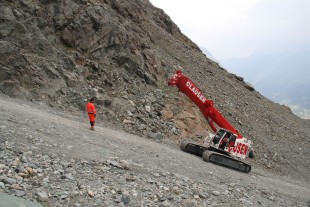 Clausen Kran AG is a family company which first opened for business in 1972 in Brig im Wallis. The company characteristics include its many years of experience and competent, motivated team. Its modern, well maintained fleet consists of four Liebherr cranes and two heavy transport vehicles. Its smallest crane is an LTC 1055-3.1 compact crane, its largest an LTM 1220-5.2.