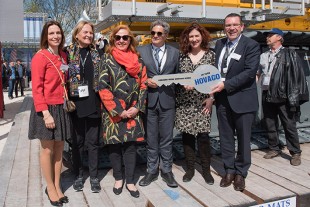 The new Liebherr LR 1500 crawler crane was one of the highlights on the company's stand at the Bauma 2016. Liebherr first unveiled the new 500-tonne machine at its customer days in Ehingen in June 2015. The "powerful – compact – simple" concept has proved popular with customers all over the world. This has led to over 20 machines being sold for jobs around the globe. The first machines will be delivered in summer this year.

The completely newly developed crawler crane delivers the load capacities of the 500-tonne crawler crane class throughout its operating range whilst having the dimensions and component weights which have previously been normal in the 400-tonne class. It can be transported around the world without restrictions with a transport weight of just 45 tonnes. The overall concept of the new crane is designed for simplicity in all areas and great economy.

Customers with a global presence particularly appreciate the transport concept and the dimensions and weights of the various crane components which have been improved for global use. Other purchasing criteria of many customers include the very high load capacities of the new LR 1500 whilst it retains its compact size compared to its predecessor, the LR 1400/2. The load capacities have been increased by an average of 28% on the 84 meter main boom. A comparison of the configuration of the 84 meter main boom with an 84 meter luffing jib means the new crane actually manages an increase of 55% on average.