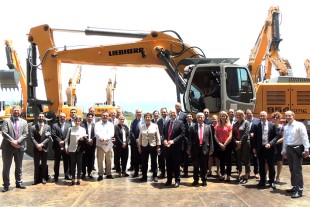 Brigitte Zypries, Parliamentary State Secretary at the German Federal Ministry for Economic Affairs and Energy, and the delegation consisting of representatives from member companies of the German Aerospace Industries Association (BDLI) and of representatives from the German-Brazilian Chamber of Commerce and Industry had traveled to Brazil in order to present the potential of the German aviation industry and to discuss possible partnerships with local companies. The tour included a visit at Brazil’s aircraft manufacturer Embraer and with Brazilian-based aerospace suppliers.

Arndt Schoenemann, Managing Director of Liebherr-Aerospace Lindenberg GmbH, Lindenberg (Germany) was accompanying the delegation in his role being the Vice President of the BDLI.

Klemens Stroebele, Director of Liebherr Brasil GMO Ltda. welcomed Brigitte Zypries and the delegation at the Liebherr Group’s site in Guaratinguetá. Not only did his guests visit the production facilities of Liebherr-Aerospace Brasil Ltda. and gain insight into its activities in the aviation sector, but they also learnt more about the Liebherr Group’s many other activities in Guaratinguetá. In addition to aerospace, the Group’s divisional branches of earthmoving, components and offshore cranes are represented there.

Greatly impressed with what she saw at the site, Brigitte Zypries confirmed: “This visit has been very interesting. I knew about the activities of the Liebherr Group in Germany, and it is really great to see how the company is also well-established in Brazil. As a representative of the Ministry for Economic Affairs and Energy, my goal was to open the doors of the Brazilian companies to the German ones, and we have succeeded in doing this.”

Klemens Stroebele commented: “We have been very happy to welcome Mrs Zypries and the delegation at our facilities in Brazil. We have demonstrated that the Liebherr Group has a strong footprint in the country, and that it is possible to maintain a stable and reliable business as well as solid relationships with partners in Brazil.”