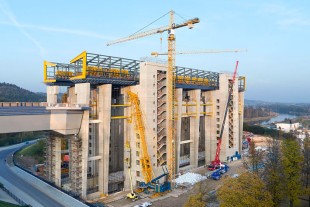 One of the most impressive industrial monuments in Germany has been providing reliable service for more than 80 years: the boat lift in Niederfinow on the Oder-Havel Canal. On this waterway which connects Berlin to Szczecin in Poland, the boat lift helps traffic to overcome a 36-metre elevation. The vertical lift hoists barges up to 80 metres in length using a massive water trough which can be closed like a lock chamber. But over the decades this imposing product of German engineering has become too small. Longer inland vessels and container ships with higher superstructures will not fit into the trough whilst tug and barge combinations must be lifted separately. So for the last seven years a more powerful lift for barges has been under construction a stone's throw away. Two Liebherr LR 1600/2 crawler cranes have been fitting concrete blocks weighing a total of around 10,000 tonnes to the new lift over the last few months. These will be used in the future as counterweights for the water trough and the vessels. The cranes needed particularly long runners with a large load capacity to install the counterweights into the structure.