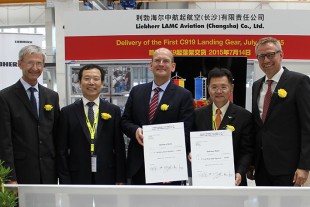 The C919 landing gear was shipped from Liebherr-Aerospace Lindenberg GmbH based in Lindenberg (Germany) to COMAC C919’s final assembly line in Shanghai, near Pudong International Airport (China). Arndt Schoenemann, Chairman of the Board of Directors of Liebherr LAMC Aviation (Changsha) Co., Ltd. stated: “The delivery of the first C919 landing gear to COMAC represents a major step in this program, and we are very happy to contribute to the success of the C919.”

For the development and production of the landing gear, Liebherr-Aerospace Lindenberg GmbH had entered into a joint venture with Chinese AVIC member Landing-gear Advanced Manufacturing Co., Ltd. (LAMC), which is based in Changsha (Province of Hunan, China)

The next steps will be supporting COMAC in integrating the landing gear into the C919 prototype aircraft in order to reach the next major program milestone, the roll-out of the C919 which is being planned for this year. 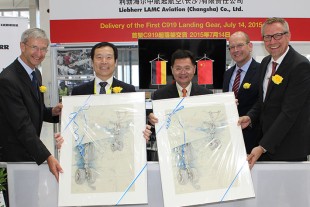