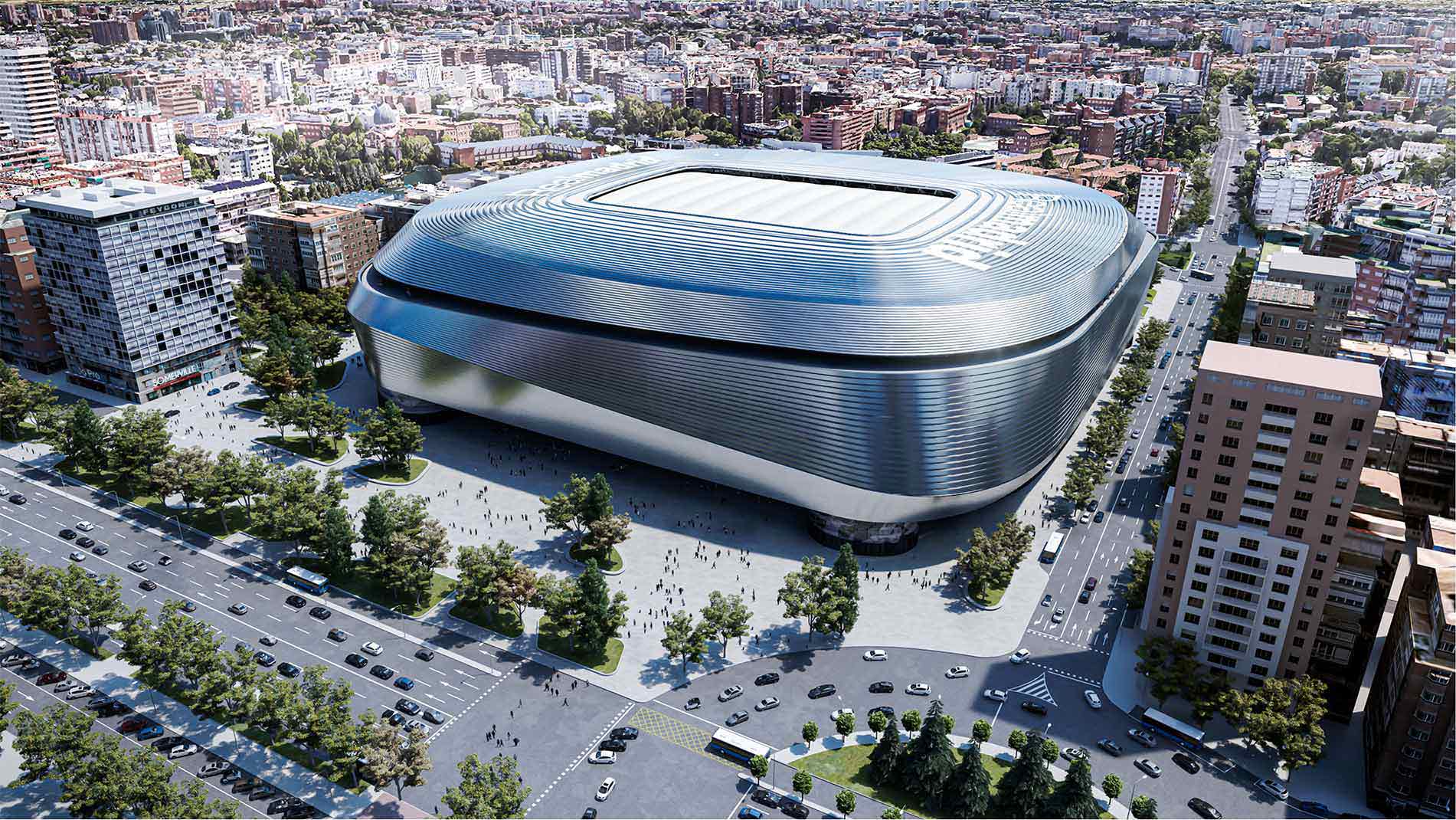 The Bernabéu of Madrid

The professionals at Spanish championship record holders, Real Madrid CF have left the pitch. A whole team of cranes and construction machinery is currently engaged in a fascinating encounter at the iconic Estadio Santiago Bernabéu in Madrid.

The Bernabéu Stadium, one of the real landmarks of Madrid, has a long history. For Santiago Bernabéu, who was initially a player before he became coach and then President of Real Madrid, the stadium represented the achievement of a lifelong dream. He collected donations and was able to start the construction work in 1944, during the Second World War. The stadium was then opened in 1947. Even today, it is still unclear how the club managed to build the stadium as cement was in very short supply at the time. After several modifications and extensions over the past few decades, the stadium, which has hosted a whole series of international finals, is currently once again filled with construction machines. 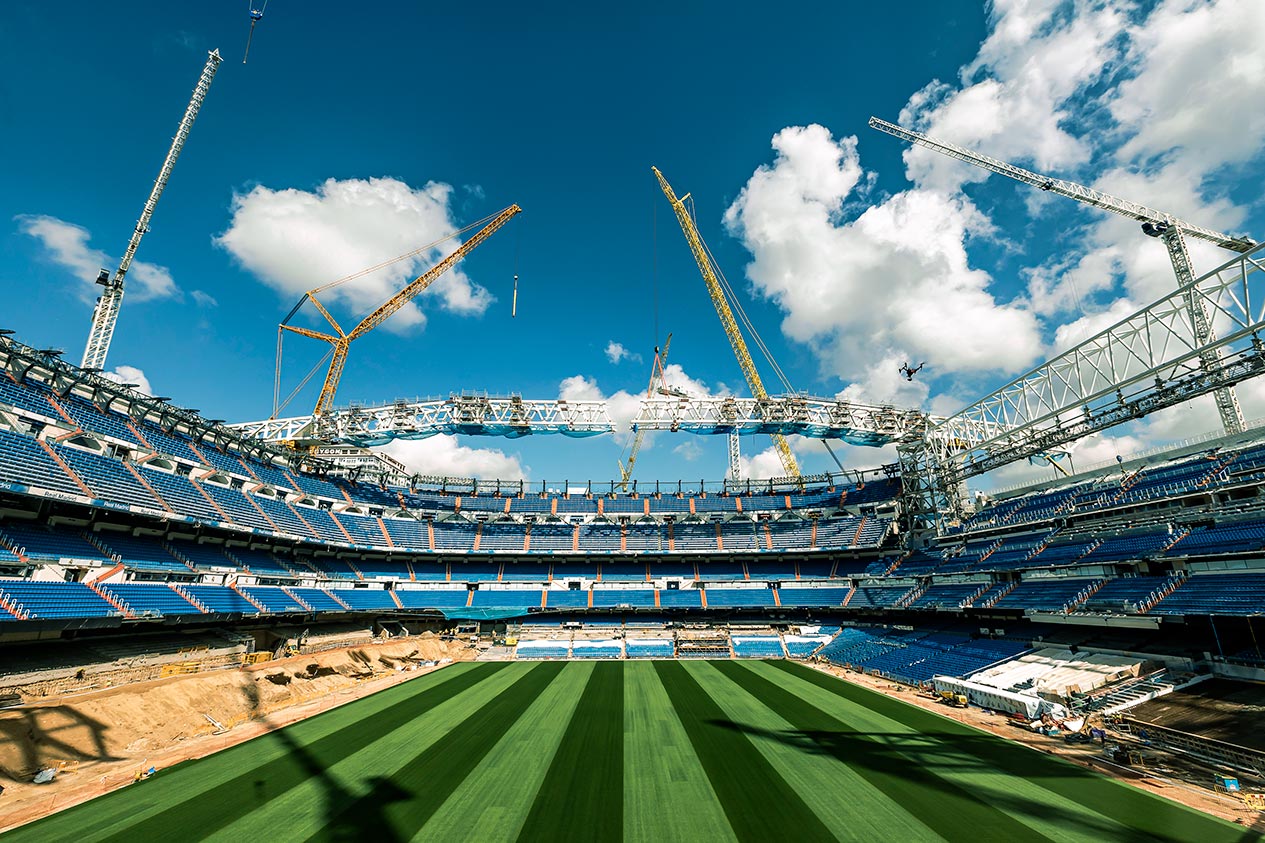 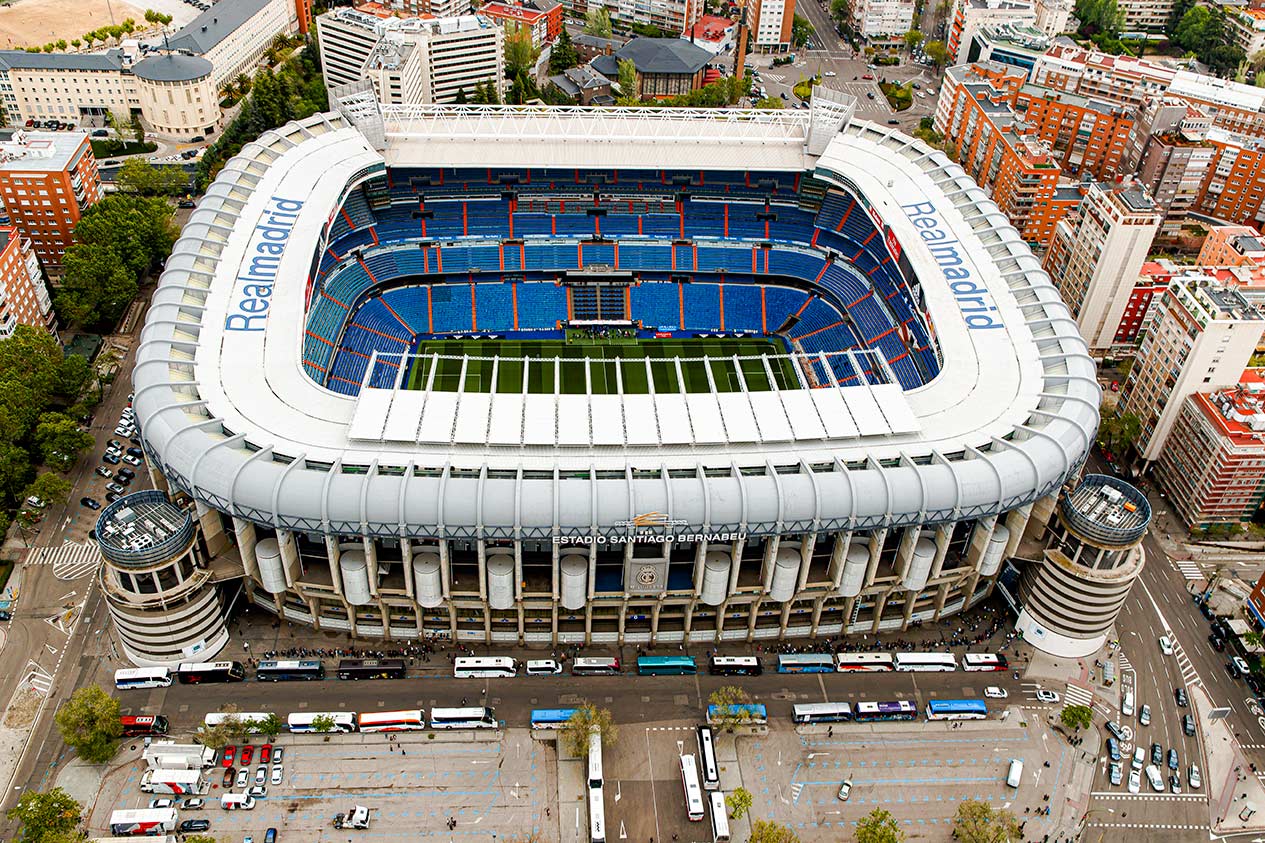 The new star among stadiums

By 2022, the Bernabéu will be an ultramodern stadium with a hydraulically adjustable roof structure, lowering hybrid turf and new shopping, business and leisure facilities. The façade can be illuminated during the hours of darkness using LEDs in a wide range of scenarios. There is a promenade around the entire structure at the top of the façade which provides a panoramic view of life in the neighbouring streets and the sporting excellence or events taking place in the stadium itself. 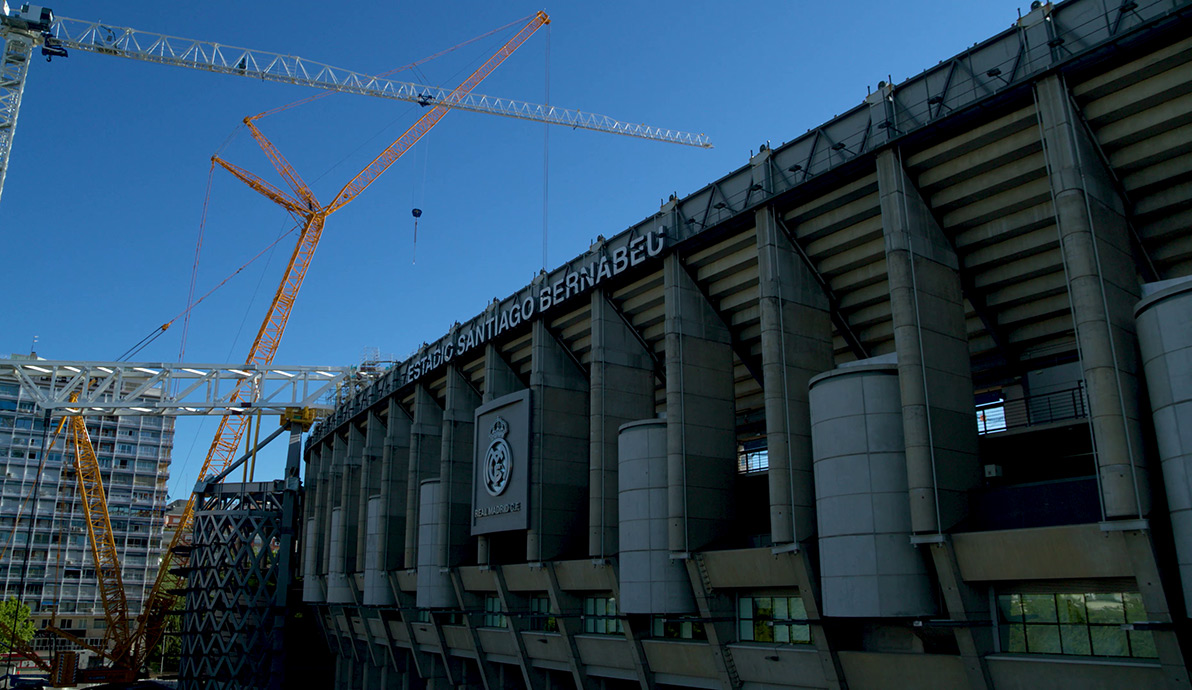 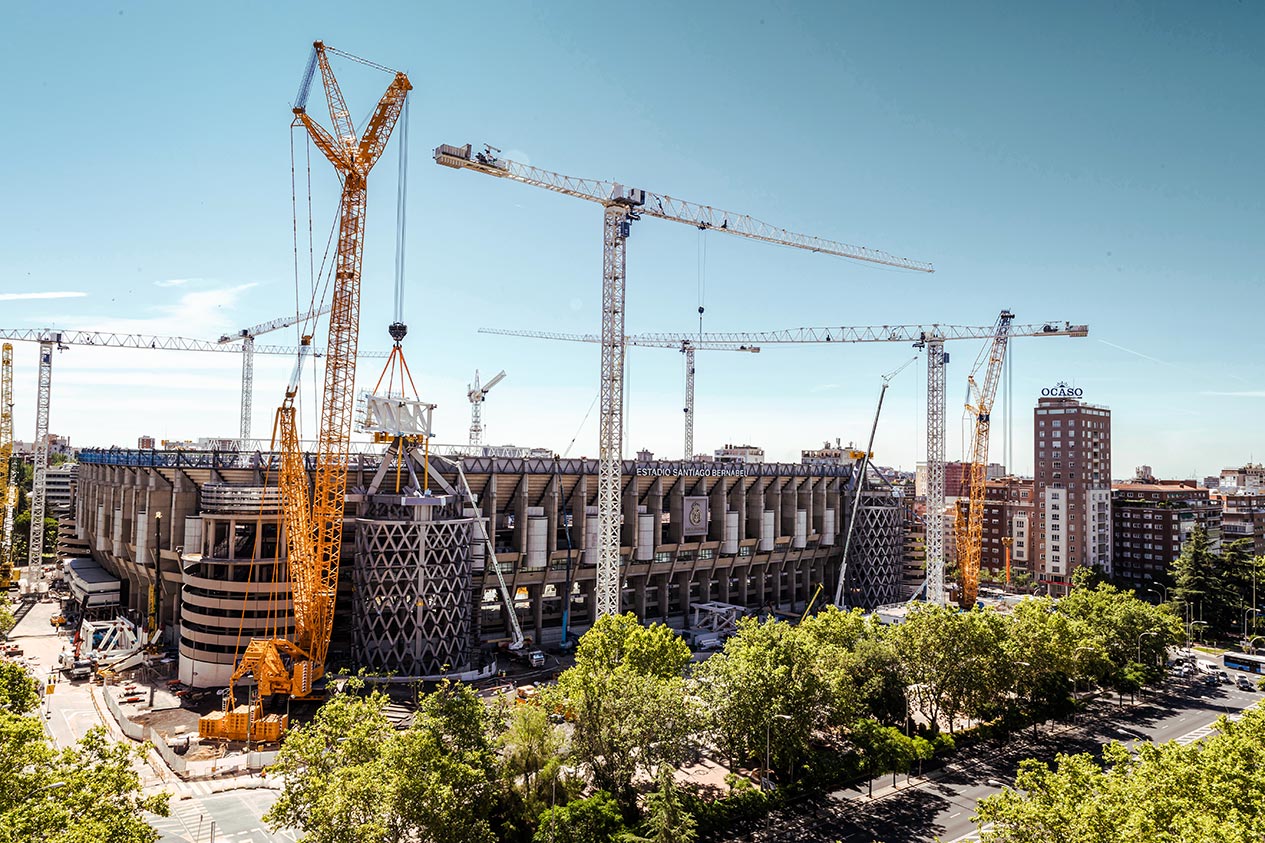 The home side started with a three-man defence formation consisting of an LR 1800-1.0 from Eurogruas 2000 together with an LR 1600/2 and an LR 1600/2-W from Gruas Aguilar. They were on site permanently from June to December 2020 carrying out a wide variety of hoisting work. In addition to these three heavyweights, there were over twenty Liebherr mobile and crawler cranes with lifting capacities from 40 to 1.200 tonnes on the site. “Winning the order for the crane work at the Bernabéu was not only a routine job for us, but also a great challenge”, says Luis Aguilar, owner of Gruas Aguilar. Not only did the use of the two LR 1600/2 cranes have to be planned in detail, but an enormous amount of logistics work was also required for transporting the cranes, which varied massively in size. “The high loads and large radii as well as the constricted conditions in the city centre immediately next to the main arterial Paseo de la Castellana road, meant that we had a very complex situation to contend with”, says Aguilar.

One of the main stars, the LR 1800-1.0, also displayed particularly impressive manoeuvrability and flexibility with the V-frame. “The V-frame enabled us to position loads weighing between 40 and 213 tonnes safely and precisely without having to move the crane on the site”, explain Eurogruas 2000’s Project Manager, Jose Garcia and Juan Ayora. “Every hoist was first simulated in digital form on the computer in detail with the team before being completed. Together with the teams from Liebherr-Iberica and Liebherr in Ehingen we had an excellent, successful teamwork, particularly configuring the booms and planning the hoists.” 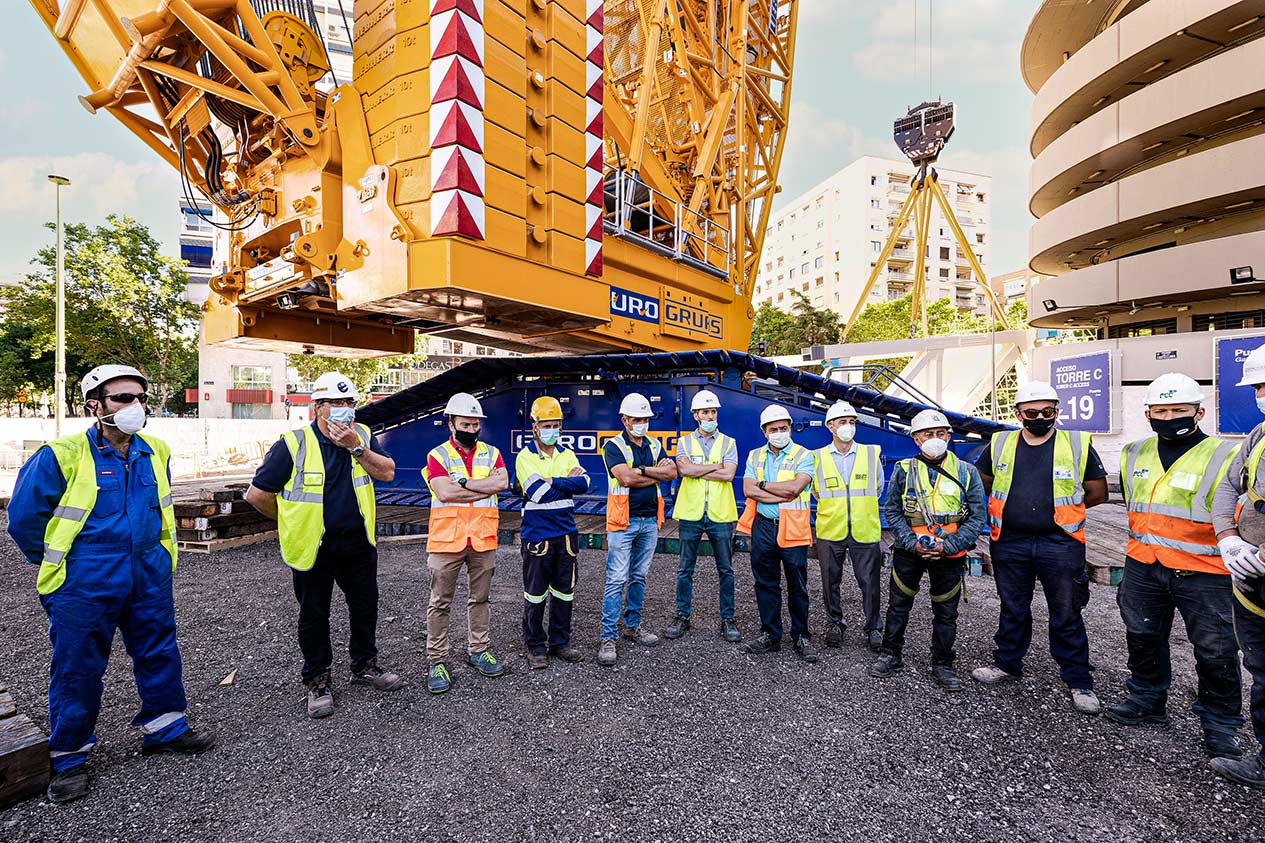 Induction training for the Eurogruas team