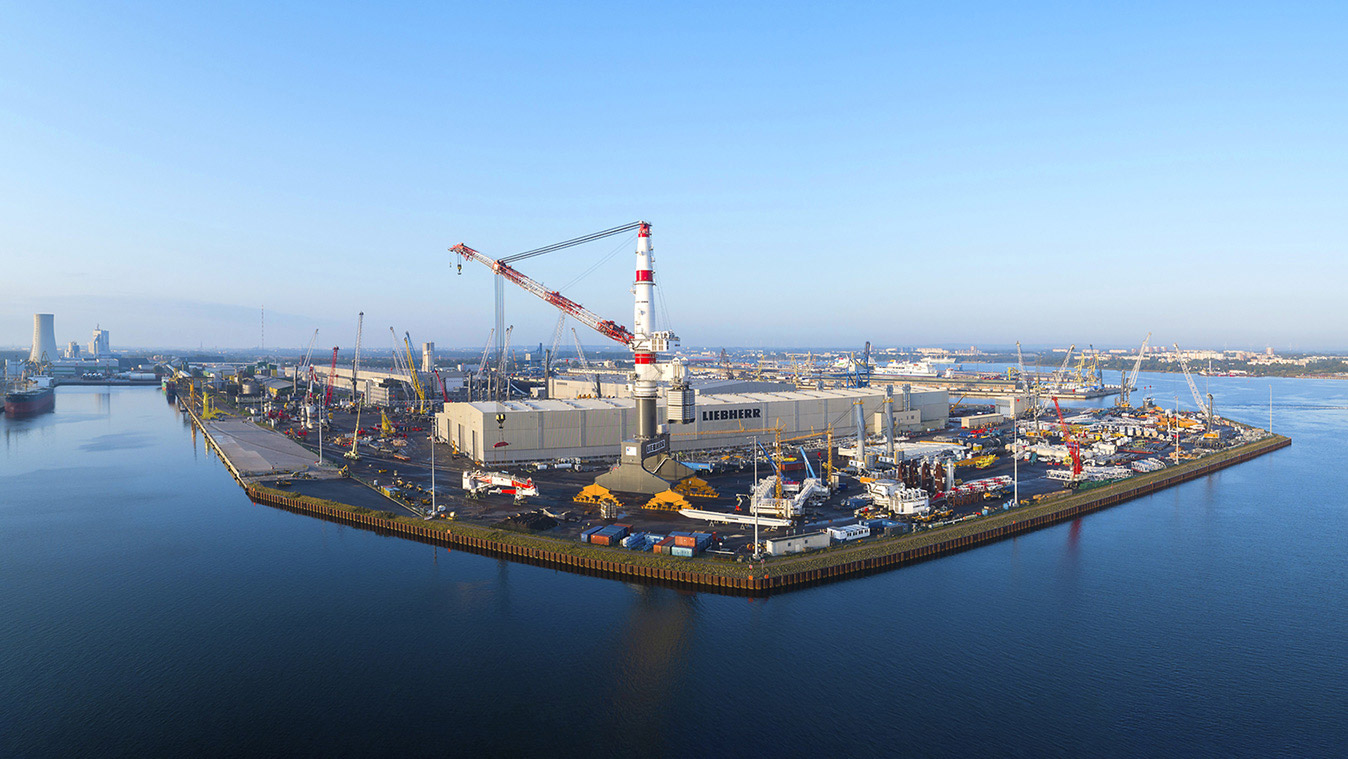 A colossus on the quayside

The skyline of the industrial port of Rostock has had a new landmark since the summer – one of the most powerful land-based gantry cranes in the world is now located on the Liebherr-MCCtec Rostock GmbH site in the form of the TCC 78000. With its boom fully luffed, the colossus reaches a height of 164 metres. The crane can hoist loads weighing up to 1600 tonnes – with a radius of 36 metres. A high lifting capacity and hook height were required to position the massive top section of the boom. That called for large mobile cranes. 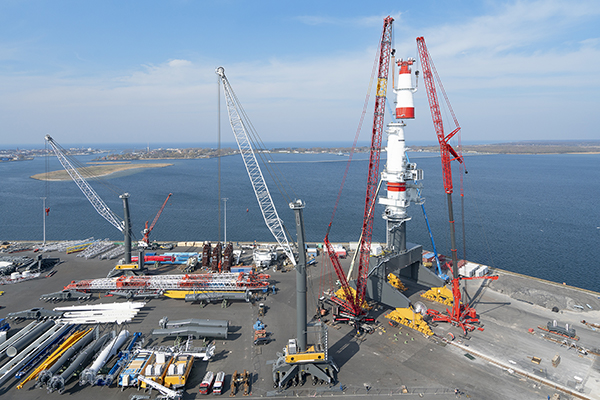 The birth of a colossus

Absolutely everything about this new power pack at Liebherr’s heavy load port in Rostock is enormous and imposing – its dimensions, lifting capacity values, foundations and also the rail system on which the TCC 78000 will be able to move through the site with a load on its hook. The abbreviation TCC stands for the ”Travelling Cargo Cranes” series, a combination of slewing crane and bespoke rail-bound gantry. The massive dimensions of this enormous crane set completely new standards, and not just in a technical sense, but also optically. Next to the enormous crane, the two largest mobile crane models from the Ehingen Plant, which helped to erect the new giant, look positively filigree and petite. 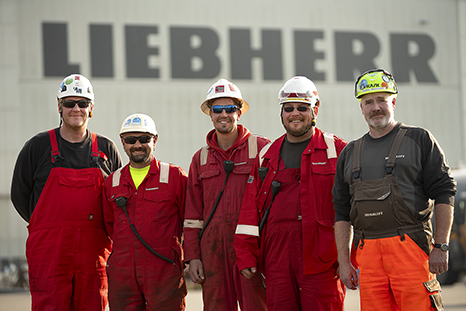 Mammoet Deutschland, entrusted by Liebherr with planning and completing the heavy hoists for this imposing, large project, had to visit the site several times with its LG 1750 in its SDB set-up version with full suspended ballast. The powerful lattice boom crane installed the 460-tonne cross member on the massive gantry together with two LHM 800 mobile harbour cranes in a three-way crane hoist with the larger crane having to manage half of the load. The gantry column and machinery house on the TCC 78000 were installed in a tandem hoist with one of the mobile dock cranes. However, the maximum hoisting height of the plant’s own cranes was not capable of installing the top section of the boom weighing 160 tonnes. That meant that an LTM 11200-9.1 mobile crane was hired from Megalift in Bremen for this job, which also took the form of a tandem hoist. Both mobile cranes were set up with a hook height of 106 metres. The derrick boom on the LG 1750 and the Y-guying on the 1,200-tonne mobile crane, together with hundreds of tonnes of ballast, provided the stability required for this extraordinary job on the quayside. 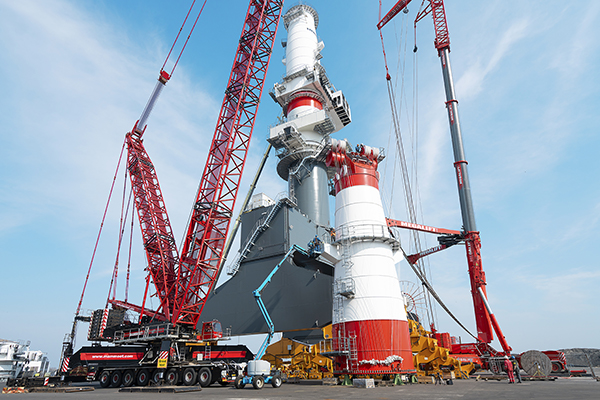 “This erection of the TCC 78000 had to be completed in compliance with stringent tolerance, adjustment and crane technology requirements”, is how Gernot Öder explains the extraordinary challenges posed by the project. Öder is Manager of Crane and Transport Projects at Mammoet Deutschland GmbH who planned and took responsibility for the heavy hoists required to erect the giant Rostock crane. “Our plan also had to have sufficient flexibility to implement deviations caused by production tolerances quickly, for example changing the slinging points.”

Despite a tight deadline and downtimes often caused by the weather, the assembly of the new heavy duty gantry crane was completed on time. 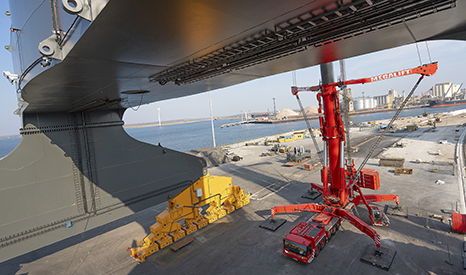 The undercarriage of the LTM 11200-9.1 looks positively filigree beside the massive 30-metre wide gantry on the heavy-duty crane.

A great deal of praise was handed out for the professionalism and sheer brilliance of the work, and not just by the customer. In fact, Mammoet Deutschland also received the “BSK Award for the best crane work of 2019” for this job. Congratulations from us!

The TCC 78000 has now officially been in action since August and in the future its work will include hoisting, assembling and loading large cranes and very heavy components manufactured by various companies, including Liebherr, of course. The crane will also be available to other companies for heavy duty handling work at the port of Rostock. At the end of 2019, the crane is due to complete its first major work, hoisting an HLC (heavy lift crane) 295000 on to a jack-up vessel. This offshore crane has a lifting capacity of 5000 tonnes with a radius of 30 metres, making it the most powerful crane ever built by Liebherr. 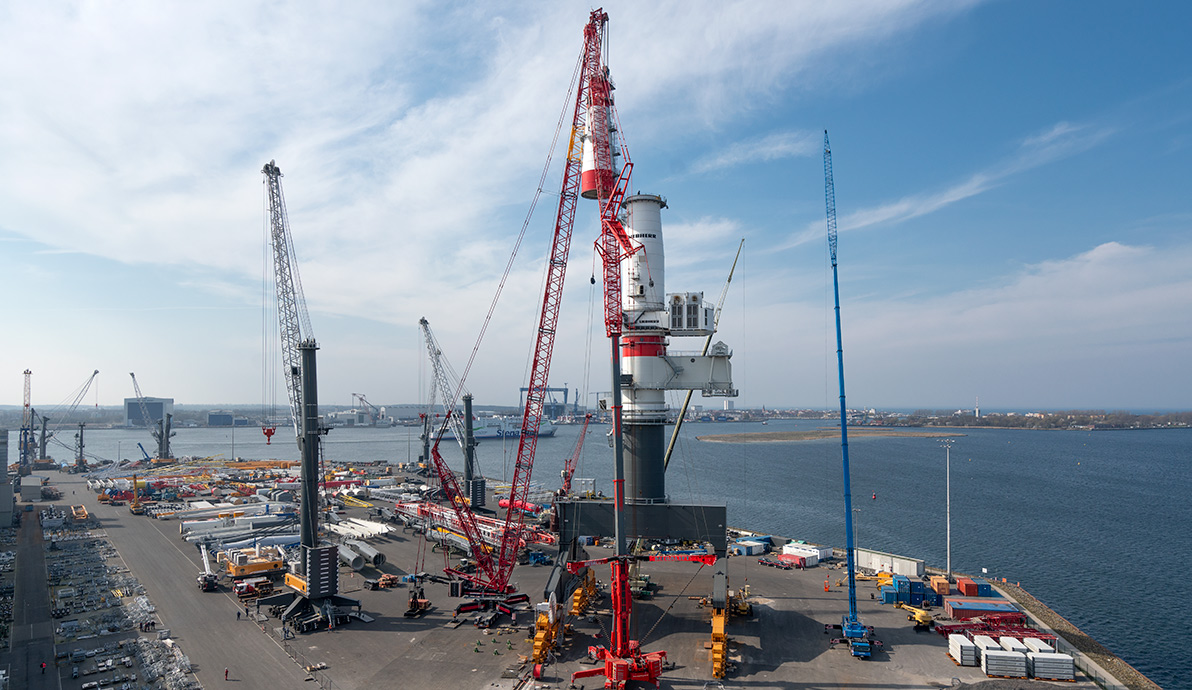