The Scottish company Weldex completes a central part of a major railway construction project in the North of England using to two Liebherr crawler cranes. Both crawler cranes work in tandem to place a bridge arch weighing around 560 tonnes over the River Irwell in Manchester.

The LR 1750 commences its service on the construction site six months before the tandem hoist. The 750-tonne crane erects the lower section of the bridge directly above the river and assembles the 90-metre long bridge arch on the bank. For this, the Weldex workers transport the massive steel structure in small segments to the construction site in the middle of the city.

The Scottish crane company Weldex dispatches its most powerful crawler crane to the site for installation of the bridge arch using a tandem hoist. In just four days, the assembly team erect the Liebherr LR 11350 with 72-metre main mast and 42-metre derrick boom.

Off they go – after picking up the load, both cranes initially move a step closer to the bank of the River Irwell.

The hoist involves a massive load application for the LR 11350 owing to the required radius of 51 metres. The 357-tonne gross load is only possible thanks to the extended guide frame optionally available on this crane. That increases the radius of the derrick ballast pallet from 25 to 30 metres. This configuration, referred to as SLDB2, enables the crane to handle an additional load case of almost 50 tonnes with a radius of around 50 metres.

Bird's eye view – the derrick ballast on the LR 11350 is 30 metres from the turntable in this configuration.

Fully ballasted – the crawler cranes move a total of around 30 metres with the bridge arch on their hooks.

To lift the massive bridge arch over the river, the crawler cranes have to move it around 30 metres in stages up to the bank. The manoeuvre is performed synchronously and is interrupted on several occasions so the cranes can be provided with more ballast. An LTR 1100 telescopic crawler crane stacks the derrick ballast of the LR 11350 up to the maximum of 600 tonnes. 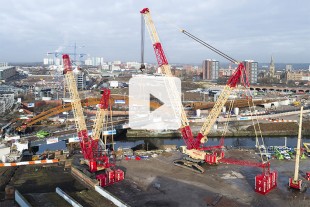 LR crawler cranes at a glance

LR crawler cranes with lattice booms are in use all over the world. With load capacities up to 3,000 tonnes they can move very heavy loads safely and economically. LR crawler cranes product overview

Our customers can rely on a worldwide sales and service network. Search here for the right contact partner.