"A chamfer for every gear"

Johannes Weixler has developed a new universal chamfering application – with the dynamic mathematical assistance of colleagues. Johannes Weixler has been employed at Liebherr-Verzahntechnik GmbH for 20 years and is responsible for technical offering. He listens to the problems and imaginations of customers and finds solutions – “That is my job.”

In one area, however, he had to wave aside many years unfortunately: “The chamfer has become a significant factor in both gear design and manufacturing. By implementing the ChamferCut technology, we are very well set up at Liebherr in the area of chamfering, too. When it comes to chamfering internal gears on ring gears or cluster gears with interfering contour, however, the procedure often reaches its limits.” Customers and Liebherr sales personnel had identified an urgent need for a solution – and Johannes Weixler had an inspiring idea. 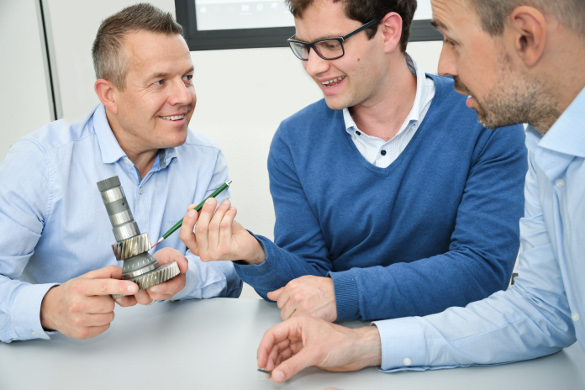 What initially appeared quite simple became a challenging mathematical task from the perspective of his colleagues, Robert Würfel and Johannes van Hauth. Robert Würfel remembers: “Johannes Weixler came to us with a request to convert his idea into a mathematical description and to solve it numerically. He wanted a constant feed, which can only be achieved through an uneven rotating speed of the workpiece. We originally wanted to use just one axis and faced

A mathematical model was created that Johannes van Hauth implemented in a test program for calculations. Since then, not only has a patent been registered for the concept of the end mill on the NC axis but also for the axial movements during milling. The reason: “This method is of interest for practically any customer with difficult geometries and, as far as we are aware, is the only available solution on the market”, says Johannes Weixler in estimating the potential of the invention. The background: The number of gears in gearboxes is growing, but at the same time the amount of space available is decreasing. Where space had to be allocated for four gears in the past, these days it is often seven gears. The gears are therefore becoming smaller and they are required to perform at a higher level, particularly at the edges, which is only possible with perfect chamfering. “Chamfering therefore extends the limits of possibility.”

To satisfy the requirements, difficult geometries are dealt with by hand or springloaded guided end mills. Example based on cluster gears: With the new method, the ChamferCut unit can machine the upper and the lower gear. However, it cannot reach the middle one. “A tapered end mill is used for deburring here: first, a meshing sensor finds the tooth space and then the travel is calculated. Our milling tool only moves from the top down so there is no risk of collision. The swivel option enables it to reach all edges: tilted downwards, it can machine the bottom contour, while tilted upwards it is able to machine the top one”, says the engineer to explain the method. Internal gears from ring gears can also be machined in the same way – even if there are contours on the inside. “This means that a chamfer is possible on practically any gear”, says Johannes Weixler in summarising the potential of the application. 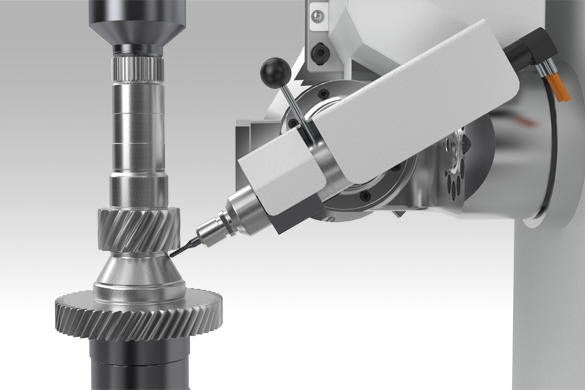 Enormous scope thanks to a completely normal tool