Austrian crane and heavy haulage contractor Felbermayr has erected a wind farm on a range of medium-height mountains in Styria. The 13 turbines made by Enercon were completed over the summer months. Transporting the turbine components to the site at an altitude of 1700 metres presented the main challenge to the Felbermayr teams. 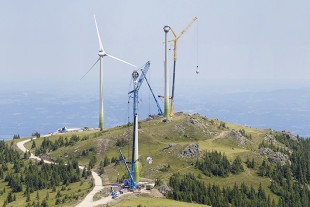 Weinebene is an Alpine pass in a region of medium-height mountains in the south of Austria close to the border with Slovenia. In summer this year, heavy haulage group Felbermayr erected 13 wind turbines with a total rating of 30 megawatts. Three large Liebherr LTM 1750-9.1 cranes were sent to the mountainous terrain to take care of this demanding project. One of the three 750-tonne cranes had been rented for the purpose from Deggendorf-based heavy haulage contractor Kran Saller.

The three nine-axle cranes had to prove their all-terrain capabilities just to get to the site which was at an altitude of 1700 metres. The modern mobile cranes weighing in at 108 tonnes managed to overcome gradients of up to 20 percent and very tight bends with ease. "Each crane took around one hour for the seven kilometre journey up to the site", reported Günter Wimmer from Felbermayr's Project Department. 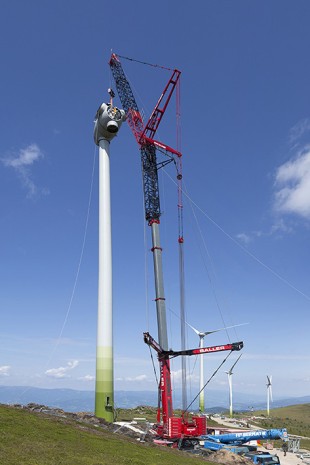 Bladelifter transported the rotor blades up to the site

The winding, steep forest tracks proved a major challenge for transporting the rotor blades. The blades, which weigh around 10 tonnes each and are around 40 metres long, were loaded onto a so-called Bladelifter at a reloading site at an altitude of 1400 metres and transported between or behind a tractor unit and a push loading unit, depending on the section of track. Mounted on eight heavy duty axles, the lifter is able to raise the blade secured to it by up to 60 degrees. This was the only way of transporting them through sections with tight bends in the wooded, rocky terrain.

The three LTM 1750-9.1 mobile cranes were equipped with telescopic extensions, luffing lattice jibs and Y guying for erecting the wind turbines. At 69 tonnes, the generators were the heaviest gross loads for the mobile cranes. They were installed at a height of 80 metres using a radius of around 24 metres.