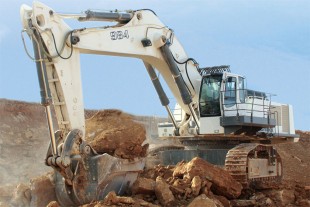 After being available for sale for almost thirty years, Liebherr has decided to retire production of the legendary R 984 excavator. Launched on the market for the first time in 1986, the R 984 backhoe or face shovel, was equipped in its standard version with a 7m³ bucket capacity. With more than 1,100 units sold worldwide, the R 984 mining excavator has earned a solid reputation as the most flexible digging and loading tool in the 120-tonne class.

Used in the majority of cases for operations in open pit mines and quarries, it is not uncommon to see the R 984 in unusual configurations. Examples are operations in a steel mill where the R 984 C moves liquid steel slag at over 1,000°C, or in the port of Hamburg, Germany, where the R 984 B is equipped with a multi-tine grapple for scrap handling. Another striking example is the R 984 C performance at El Cerrejón coal mine in Colombia. Characterized by a special long reach configuration, several of these machines have accumulated more than 60,000 hours. It is not a coincidence that the machine inherited the nickname of the “Swiss Army knife”.

Over a third of these 120-tonne class machines were shipped within Europe, while another third were sent to Africa. The very last unit was delivered at the end of 2015 to Algeria for some dredging works. While customers can no longer purchase new R 984 excavators, Liebherr offers its brand new machines, the successor models R 9100 and R 9150, both equipped with a Liebherr engine, to continue satisfying its customers’ demands.