Liebherr unveiled a new 130-tonne mobile crane with a 60-metre telescopic boom at the Bauma 2007 – the LTM 1130-5.1. The 1000th crane of this type left the manufacturing plant in June this year. Construction contractor Alfred Trepka GmbH based in Ober-Grafendorf in Lower Austria took delivery of the new crane at a small celebration. The LTM 1130-5.1 will be a new addition and the largest crane in the company's fleet. The time-tested 5-axle crane from Liebherr features the most innovative crane equipment as a result of the company continuously installing its latest technologies into it. 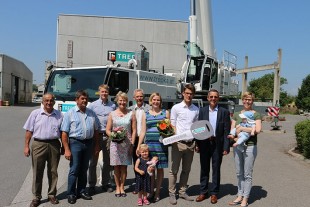 After being founded in 1920 as a master building company, over the course of three generations Trepka has developed into a national construction contractor and manufacturer of prefabricated concrete components. Trepka has been using its own mobile cranes for several years, all of which bear the Liebherr name. But as components grow ever larger and heavier, its existing cranes in the 50 and 90-tonne classes are reaching the limits of their capacity. So the company decided to purchase a 130-tonne mobile crane. As a result of its good previous experience with Liebherr, the LTM 1130-5.1 was chosen. Trepka ordered the crane with the VarioBase® variable support base which ensures greater flexibility and safety, particularly in constricted site conditions, and also provides greater capacity in many situations.

The LTM 1130-5.1 has been successful on all five continents. Liebherr has delivered this crane model to customers in almost 70 different countries. 180 cranes are in use in Germany, 90 in the USA, followed by Australia, Canada and France with 50 units each. But customers in smaller crane markets also operate the Liebherr 130-tonne machine, including those in Angola, Ivory Coast, Colombia, Mauritania and Myanmar. 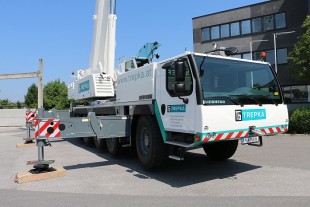 The LTM 1130-5.1 features state-of-the-art mobile crane technology as Liebherr has continued to install technical innovations such as VarioBase®, ECOmode, new crane cabin, new single-piece steel rims and the latest generation of disk brakes in this model as soon as they were available.

The Liebherr 130-tonne crane has a long, variable boom system with outstanding lifting capacities. Its innovative technology and compact design makes it flexible and economical to use. It features a 60m telescopic boom which can be extended with a 10.8 - 19m double folding jib and also with two lattice sections each 7 m in length. This makes it possible to reach hook heights of up to 91 metres and radii of up to 72 metres. With a maximum axle load of 12t, the LTM 1130-5.1 carries up to 9 t of ballast. This means that it can tackle a wide range of crane jobs without additional ballast transport.