As a regular name among the exhibitors, Liebherr-Aerospace will participate again in Airshow China 2018, which takes place from November 6 to 11 in Zhuhai. At stand no. H3D1, visitors will be able to see products from the areas of flight control and actuation, air management, landing gear, gears and gearboxes, as well as electronics. 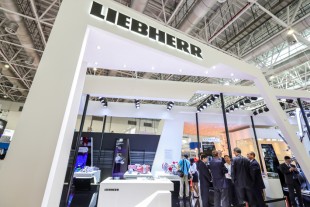 As in the years before, Liebherr will showcase its capabilities at Airshow China. - © Liebherr

As in the years before, Liebherr will showcase its capabilities at Airshow China. - © Liebherr

Liebherr-Aerospace will again welcome partners, official delegations and visitors at China Airshow. Highlight exhibits on the stand include a main landing gear for the Chinese C919 aircraft program as well as components for the wing tip folding system for the Boeing 777X aircraft program.

In addition, visitors will have the opportunity to discover innovations in research and development, such as a composite slat that features full electrical anti-ice devices from the Belgian company Sonaca and associated electronic controls from Liebherr-Aerospace. The product was developed within the research and technology collaboration between both companies, which is part of the European research program Clean Sky for the More Electric Aircraft. Further highlights include weight-optimized components produced using 3D printing technology.

A modular designed remote electronic control unit will be also on display. The ingenious concept of the unit developed by Liebherr-Aerospace offers plenty of advantages, thanks to digitization and can be used flexibly in the aerospace and space industry.

A joint venture at Liebherr-Aerospace’s stand

Liebherr LAMC Aviation (Changsha) Co., Ltd., the joint venture between the Chinese company LAMC (AVIC Landing Gear Advanced Manufacturing Corp.) and German-based Liebherr-Aerospace Lindenberg GmbH, will be represented as well at the stand. The company recently celebrated the delivery of its first C919 landing gear system assembled in China to its air framer customer COMAC. Liebherr LAMC Aviation (Changsha) Co., Ltd. will assemble the next C919 nose and main landing gears in Changsha. Step by step, the joint venture is taking over the direct procurement of the parts delivered by approved suppliers.

Established in 2012, the joint venture develops and manufactures landing gear systems for the Chinese aviation industry as well as the international aviation market. Liebherr LAMC Aviation (Changsha) is also responsible for the assembly and delivery of the landing gear system of COMAC’s ARJ21 program and will work for other programs in the years to come.

Outlook of Liebherr-Aerospace and its business in China

Liebherr-Aerospace expects a strong development of COMAC, as China is an important strategic market in the aviation business. The company foresees that the ARJ21 and C919 aircraft will be a market success.

Liebherr’s relationship with COMAC, which started 15 years ago with the ARJ21 Regional Jet program, is of very high quality. It has been consolidating over the years and Liebherr considers this relationship as very promising for everyone involved.

Furthermore, and by means of the joint venture Liebherr LAMC Aviation (Changsha) Co. Ltd. and the cooperation of Liebherr-Aerospace Toulouse SAS with the Nanjing Engineering Institute of Aircraft Systems (NEIAS) with the aim of designing and producing components for the C919 air management system, Liebherr-Aerospace sees also a very good possibility to contribute to the development of the promising program C929.

Liebherr-Aerospace is a leading supplier of systems for the aviation industry and has more than five decades of experience in this field. The range of aviation equipment produced by Liebherr for the civil and military sectors includes flight control and actuation systems, landing gear and air management systems, as well as gears, gearboxes and electronics. These systems are deployed in wide-bodied aircraft, single aisle and regional aircraft, business jets, combat aircraft, military transporters, military training aircraft, civil helicopters and combat helicopters.