Truck racing team Kamaz Masters sets forth its success story also this year: In the trucks equipped with Liebherr diesel engines, it finishes the Dakar Rally second and wins the Africa Eco Race 2016 in two categories. 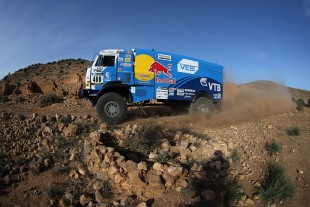 The racing teams of the Dakar Rally covered also this year a distance of over 9,000 km from Buenos Aires to Uyuni in Bolivia over Salta at the foot of Cordillera back to Argentina. In overall 16 stages, which varied in terrain and difficulty, the route led through the sands of the Atacama Desert, 600 km of open space with no hindrances, as well as the narrow, steep and oxygen-poor passes of Bolivia. From 2 January to 16 January, 218 vehicles participated in the race, with 55 trucks among them.

The ex-champion, Airat Mardeev, from the Kamaz Master team reached the goal in Rosario after nearly 46 hours' drive. Thus, he arrived second only about an hour and ten minutes behind Gerard de Rooy from the Netherlands in his Iveco truck. In an exciting challenge with the strong teams of Iveco, MAN, Tatra and Renault, the teams of Eduard Nikolaev, Andrey Karginov und Dmitry Sotnikov made it to the seventh, 14th and 15th place. Three of the four Kamaz trucks were equipped with the Liebherr V8 diesel engine in 2014 due to the tightened restrictions on emissions. The engines calibrated to 800 kW are characterized by an output of 1,050 horsepower. 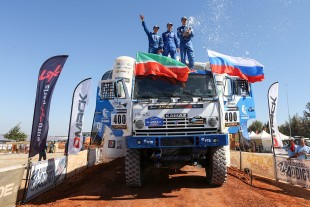 In the truck category of the Africa Eco Race 2016 the Kamaz team of Anton Shibalov won the first place for the third time. From 29 December until 11 January, the annual rally comprised over 6,500 km stretching from Europe (Monaco) over Morocco and Mauretania to Dakar in Senegal. The Kamaz teammate, Sergei Kupriyanov, also finished first among hybrid vehicles for gas and diesel with his Kamaz truck