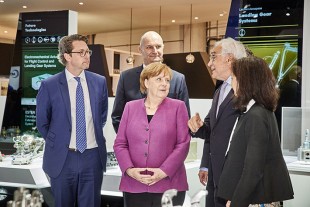 Federal Minister of Transport Andreas Scheuer, Dr. Dietmar Woidke (Minister-President of Brandenburg), Chancellor Dr. Angela Merkel, Dr. h.c. Willi Liebherr (President of the Supervisory Board of Liebherr-International AG) and Delphine Gény-Stephann (Secretary of State, French Ministry for the Economy and Finance) (from left to right) at the ILA booth of Liebherr-Aerospace

German Federal Chancellor Dr. Angela Merkel visited Liebherr-Aerospace’s booth at ILA Berlin Air Show. On her tour at the opening day of the international exhibition, she was accompanied by Andreas Scheuer, German Federal Minister of Transport, and Dr. Dietmar Woidke, Minister-President of the German federal state of Brandenburg, amongst others. Dr. h.c. Willli Liebherr, President of the Supervisory Board of Liebherr-International AG, welcomed the guests and presented some of Liebherr’s current research and development projects for the aviation industry to them. Amongst other programs, Liebherr-Aerospace is conducting research into fully electric components for the aircraft of the future.

Another of Liebherr-Aerospace’s guests at the beginning of this year’s ILA has been Peter Altmaier, German Federal Minister for Economic Affairs and Energy. Also in the morning, Thomas Jarzombek, the German government’s coordinator for the aviation and space industry, was interested to learn about new technological trends at the Liebherr booth. Some more prominent guests have announced their visit during the remaining days of the exhibition. For example, the company is looking forward to welcoming representatives of the Ministries for Economic Affairs of the German federal states of Bavaria and Baden-Wuerttemberg as well as of the Directorate-General for Research and Innovation at the European Commission.