The Eurogruas Group is expanding and modernising its crane fleet with nine new Liebherr mobile cranes. The cranes are destined for various outlets in Spain. Eurogruas decided to buy mobile cranes from Liebherr as a result of its innovative crane models within the selected size classes and the effective customer service from Liebherr Iberica in Spain and other Liebherr outlets around the world. 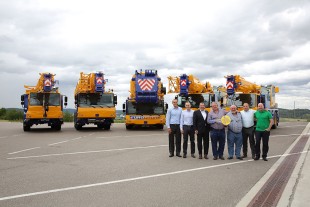 The Eurogruas Group is made up of various crane contractors based in the south of Spain. In total the Group operates around 150 mobile and crawler cranes with lifting capacities up to 1000 tonnes. In addition to Andalusia and Murcia, Eurogruas mobile cranes are active throughout Spain and in other countries including Brazil and Africa. Eurogruas main areas of work include the erection of wind turbines, petrochemicals, infrastructure projects and covering local demand in the catchment areas of the companies which make up the Group.