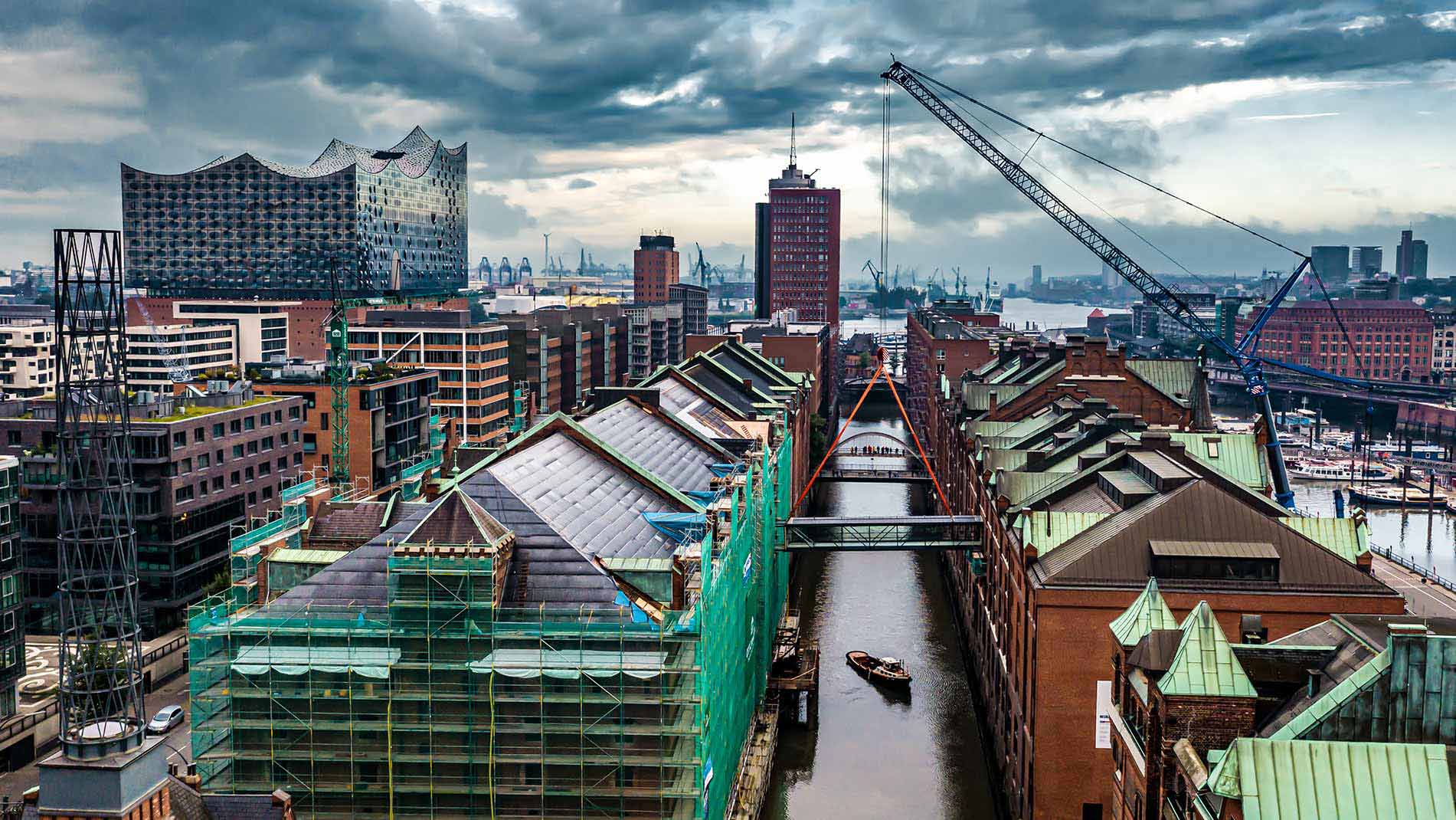 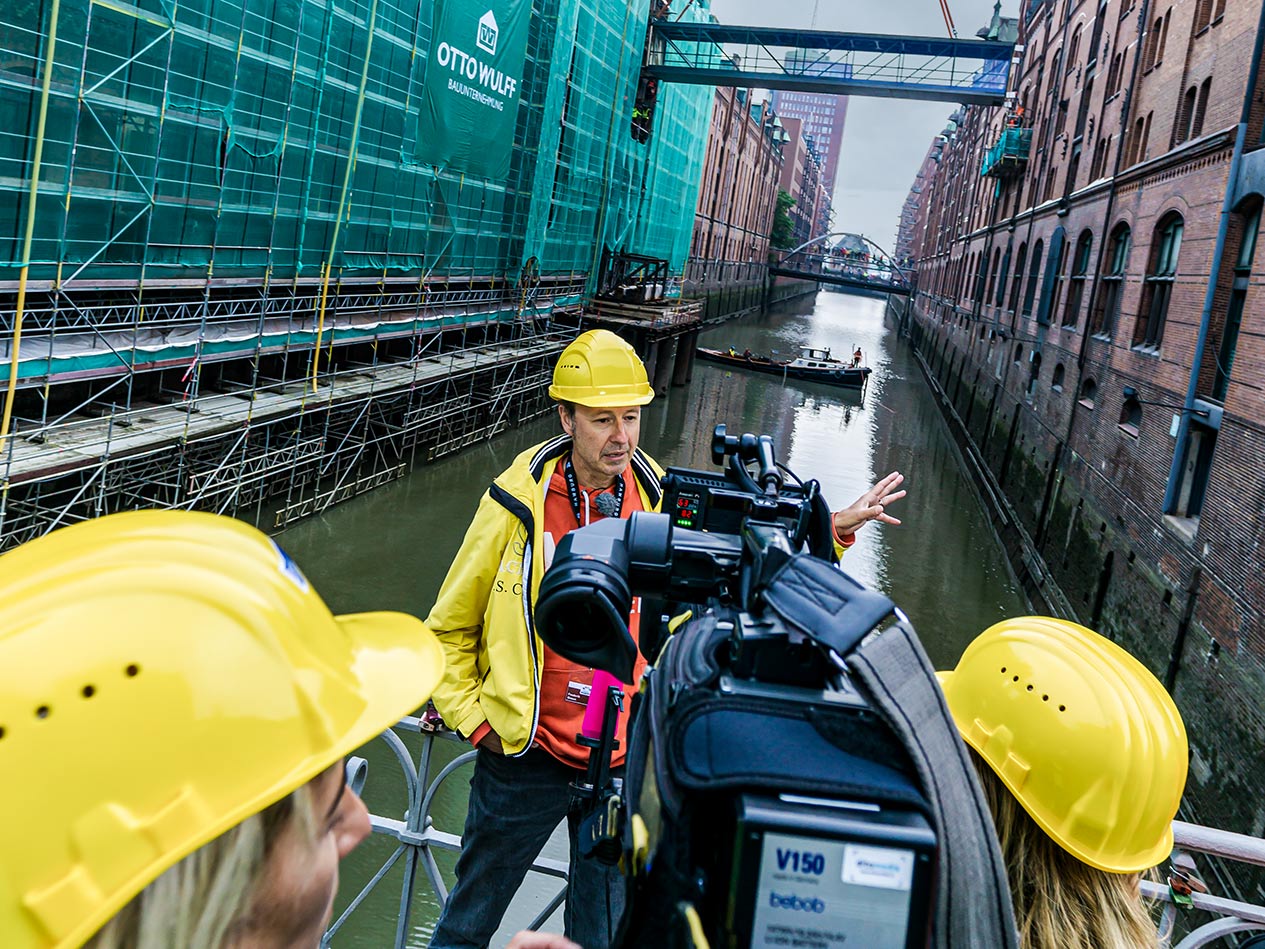 Happy: “This is where the future starts for Wunderland.” 15 years ago, co-founder Frederik Braun envisaged creating a bridge over the dyke to extend “Miniatur Wunderland”. In two years time, model trains will also be able to cross the bridge.

Skywalk into the rainforest

The largest model railway layout in the world is bursting at the seams. Because its existing location in the former warehouse building in historic Speicherstadt has no spare room for future expansion, the people behind the railway have been looking for ways to expand for some considerable time. Paderborn-based crane rental contractor Hofmann recently carried out a spectacular operation using its Liebherr LTM 1750-9.1 mobile crane to install a 25 metre skywalk over the neighbouring canal. The walkway over the dyke will act as the link to the neighbouring quay warehouse in the future. As from 2022, visitors will be able to get to the neighbouring building over the bridge to view even more newly created railway layouts. 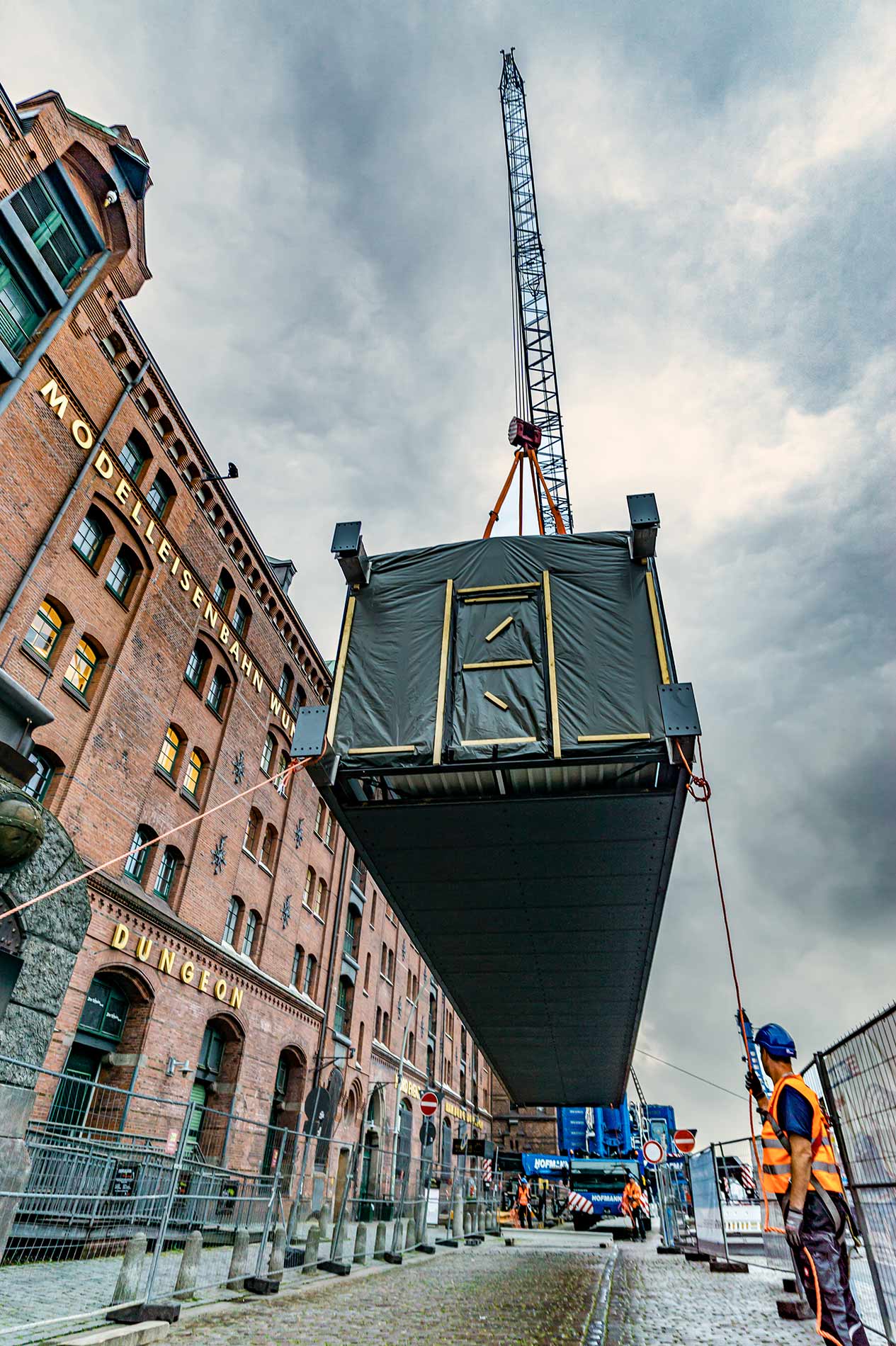 “Just think, you go over the bridge and all of a sudden you’re in Rio or the rainforest,” says Gerrit Braun enthusiastically to one of the many cameras which had found their way on this dull July morning to Hamburg’s Speicherstadt before dawn had broken to gather images for their stories. Braun, wearing an aged fireman’s helmet, was standing in front of the “Miniatur Wunderland” building. And he was pretty excited, which you have to allow him because together with his twin brother Frederik, he had been waiting for this moment for half an eternity – an enormous crane hoisted a pedestrian bridge over the canal which separates the building from the neighbouring quay warehouse.

It has been fifteen long years since they had the idea of building a bridge over the dyke and it becoming reality in July 2020. An incredible number of plans and negotiations with conservationists and Hamburg’s authorities were required to enable the project to go ahead. These laborious obstacles were down to the fact that the historic warehouse buildings, with the decorative crenellations, towers and stepped gables have been a World Heritage Site for several years now.

The twins are the founders of what is now the largest model railway layout in the world. Together with a friend, in 2001 they started to turn their vision into reality in the old warehouse building. Today, 19 years and 19 million visitors later, at last they have the bridge to the neighbouring block which they have wanted for years, which will mean that in the future the relentless model makers will have a further 3,000 square metres in which to build their layouts. Rio de Janeiro is only the start. The Brazilian metropolis near Sugarloaf Mountain will be followed by the rainforests of Patagonia, Central America and the Caribbean. “Then we’ll see”, says Gerrit Braun. 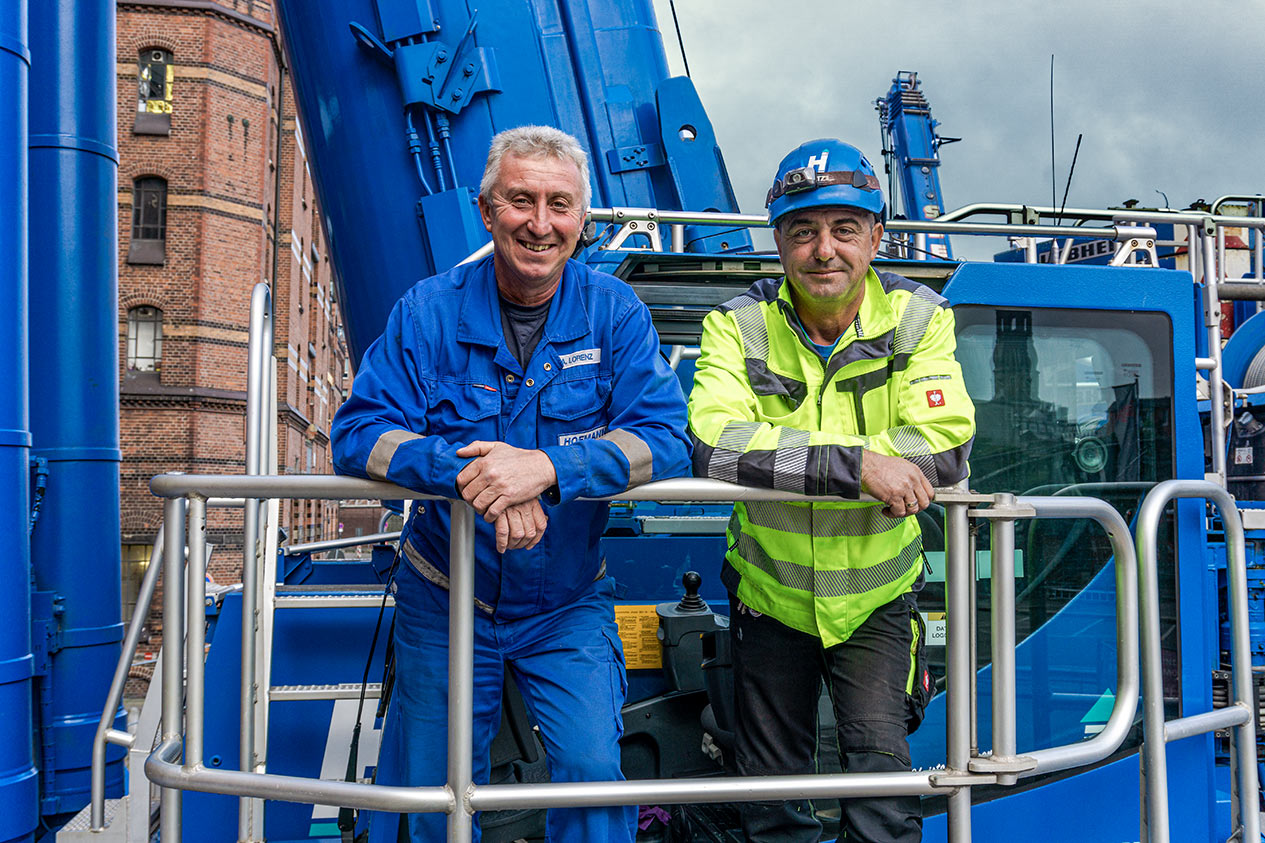 Elton Toska (right) and his colleague Alexander Lorenz on their Liebherr LTM 1750-9.1 crane.

Speicherstadt is supported on thousands of oak piles

Hamburg-based heavy haulage contractor Gustav Seeland won the order to install the bridge. “We started planning this unusual job two and a half years ago,” says Arne Scharnweber, who took charge of the task for Seeland and has now completed it. Much of the work on the actual morning had already been done by the 27-year old Hamburger. It was not just the hoist itself that had to be planned carefully, one of the main aspects was to check the conditions of the foundation for the crane’s set-up area meticulously. When Speicherstadt was built around 130 years ago, the weight of the massive warehouses towering around 30 metres into the air had to be supported on thousands of oak piles. “The pile structures meant that we had several challenges to face with the ground loads,” explains the engineer. Geostatic reports were just as much part of the preparation for Scharnweber as a study of the canal cadastre to find a suitable set-up area for the massive mobile crane.

A diagram of Hamburg’s Speicherstadt dating from 1888
We need your consent This YouTube video is provided by Google*. If you load the video, your data - including your IP address - is transmitted to Google and may be stored and processed by Google inter alia in the USA. We have no influence over further data processing by Google. By clicking on "Accept", you consent to the transmission of data to Google for this video in accordance with Art. 6 (1) (a) GDPR and at the same time expressly consent to the transfer of data to the USA in accordance with Art. 49 (1) (a) GDPR. If you no longer wish to consent to each YouTube video individually in the future and wish to be able to load the videos without this blocker, you can also select "Always accept YouTube" and thereby consent to the associated data transmissions and transfers to Google and to the USA for all other YouTube videos which you open on our website in the future. Please note that, in the opinion of the European Court of Justice, there does not currently exist an adequate level of data protection in line with EU standards in the USA, and at present we cannot provide suitable safeguards to protect your data and offset this shortcoming. Possible risks to you of data transfer to the USA are that access by state authorities cannot be excluded and that your data could be processed for reasons of national security, criminal prosecution or for other purposes in the public interest of the USA, possibly without you being informed separately and without enforceable rights and effective means of redress being available to you. You can withdraw consent that you have given at any time with future effect via the settings. For further information, please see our Data Protection Declaration and Google's Privacy Policy. *Google Ireland Limited, Gordon House, Barrow Street, Dublin 4, Irland; Mutterunternehmen: Google LLC, 1600 Amphitheatre Parkway, Mountain View, CA 94043, USA 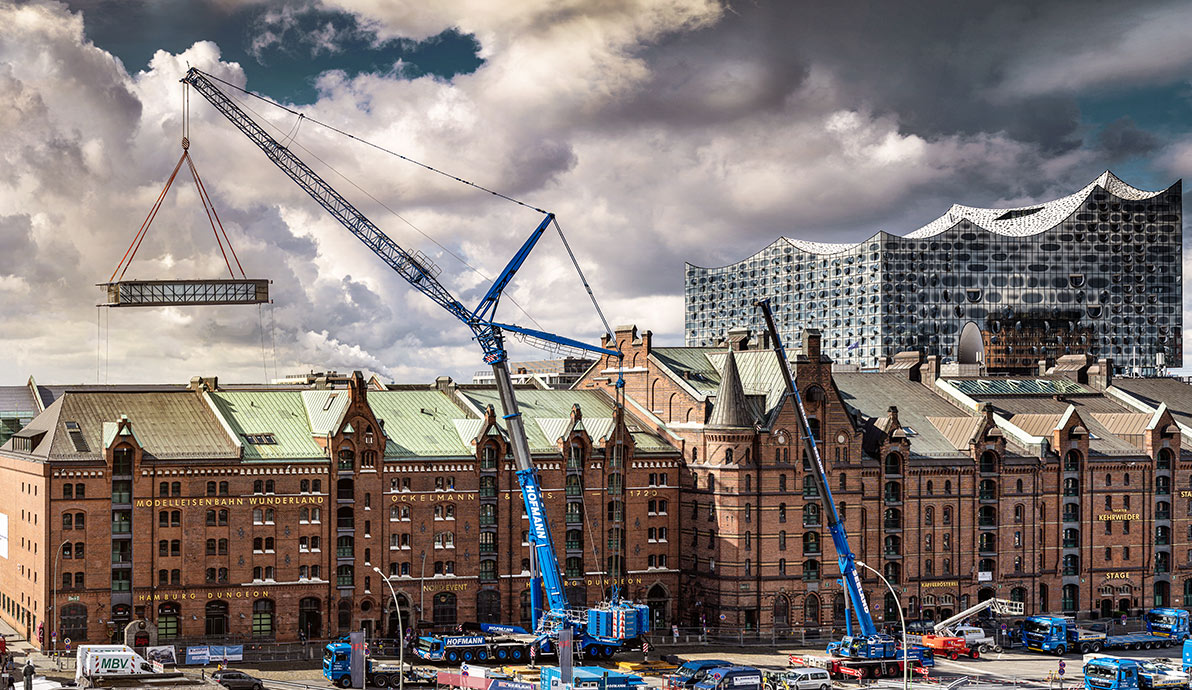 The job was perfectly planned by Seeland. We just had to set up the crane and get on with it.

The crane itself, a Liebherr LTM 1750-9.1, had been hired from crane contractor Hofmann, a Paderborn-based offshoot of the Bracht Group. It had been erected two days previously with the assistance of an LTM 1100-5.2 from Seeland. Massive crane mats and large support slabs were laid out on a thick layer of sand to reduce the support pressure under the enormous machine. They distributed the gross weight of the crane and load over a total area of 100 square metres to reduce the soil load as much as possible.

The blue mobile crane was equipped with 204 tonnes of ballast and a 49 metre luffing lattice jib. Finally, a load of 40 tonnes of steel and glass had to be moved over the copper roof to the other side of the six-storey structure. 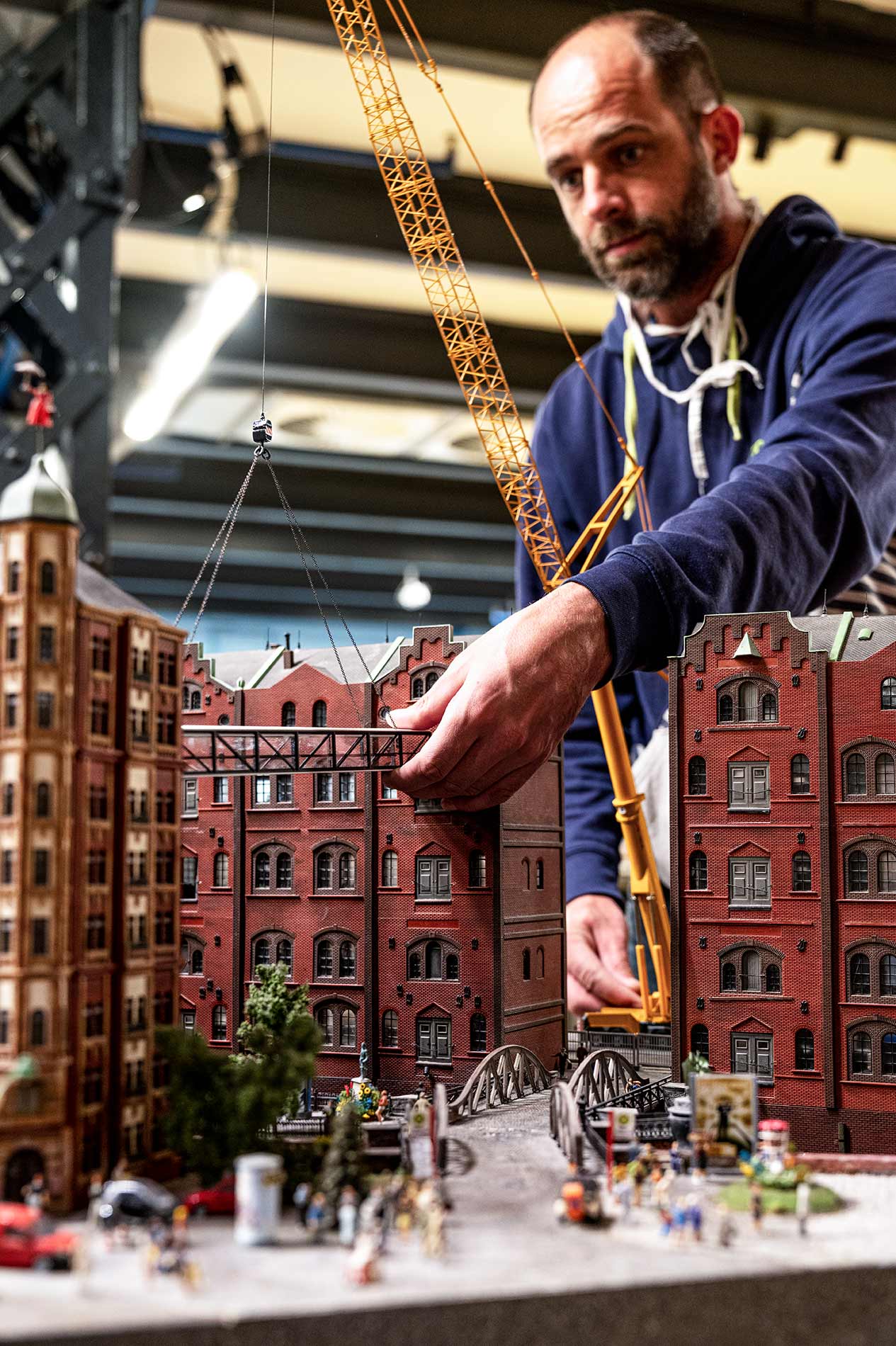 Bridge building on a 1:87 scale. Our crane is carefully included in the Wunderland exhibition, simulating the hoist for the new connection bridge.

The mobile crane had to use a radius of 48.5 metres for the hoist. Alexander Lorenz in the crane cab and his colleague Elton Toska controlled the elegantly designed connection bridge initially over the building and then lowered the component between the Neo-Gothic brick façades. The engineers were waiting on the third level of the warehouse to secure the bridge structure to its mountings.

The incredibly realistic simulation of this ambitious bridge installation inside the building proved to be significantly easier than the installation of the bridge outside. Because monumental exhibition contains a model of the historic Speicherstadt itself, we at Ehingen had the idea of sending a special gift to Hamburg for the enterprising model makers as our contribution to the fantastic Wunderland show. So we made a model of the Liebherr LTM 1750-9.1, including the luffing jib, of course.

Nikolaus Kraft, one of the twenty model makers employed at Wunderland, made a miniature filigree connection bridge and acted as both crane operator and engineer to adjust the scene. He completed the installation of the miniature bridge on the hook of our crane in the model layout with great skill and care. The next time you visit the Hanseatic city, you will be able to see the spectacular operation involving the crane and the skywalk in a scale of 1:87 for yourself in the Hamburg section of the exhibition, next to the Rocky Mountains and the space shuttle blasting off from Cape Canaveral. It really it is worth checking out. 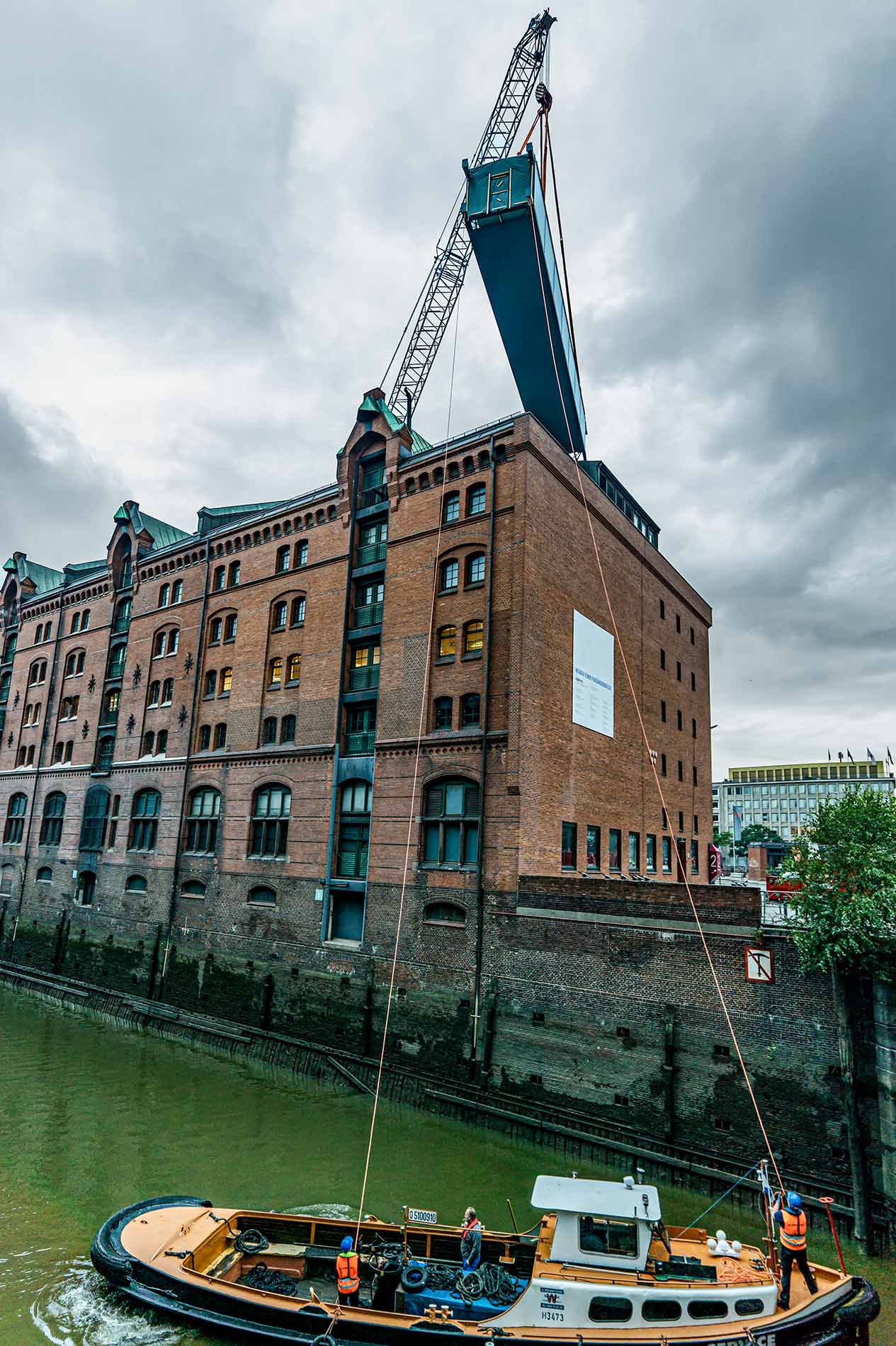 The retaining ropes are held on a small barge as the bridge is swung over the canal.

In fact, Hamburg’s Speicherstadt with its characteristic architecture, unique dykes and numerous bridges is worth a visit any time. The fantastic backdrop from the German Empire era is actually the largest historic warehouse complex in the world. As from 1885 the quay warehouses were built over a period of around thirty years so that the area could act as a free port and not have to charge duty on trade with the Hanseatic business community after Hamburg had joined the customs union of the German Empire. A whole residential area occupied by workers, seafarers and craftsmen, but also including some impressive houses owned by businessman and civic dignitaries had to be razed to the ground to make room for it.

A total of 20,000 people had to be rehoused within the city limits at the time. Since 1888, the buildings have mainly been used to store and process coffee, tea and spices. With the increase in container traffic in the 1970s, the old warehouses increasingly became less important until the area was finally removed from the free trade zone in 2003. Only a small part of the area is now used to store goods. Behind the listed walls there are now advertising agencies, hotels and restaurants as well as several museums. And, of course, the largest model railway layout in the world, built by two exuberant brothers whose desire to expand simply would not go away.