Liebherr is carrying out an extraordinary modernisation project on the Molikpaq offshore platform off the Russian island of Sachalin. Two offshore cranes are undergoing full refurbishment, with one of them being fitted with a new control system. Our 230 HC-L 8/16 Litronic luffing jib crane is being used as a support crane for this extensive modernisation project. 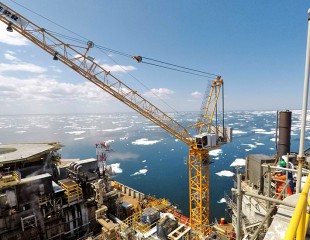 Molikpaq was the first-ever Russian offshore oil production platform. Commercial oil production was started on this platform in 1999. The oil from the platform is transported through the Transsachalin pipeline system to the oil export terminal at the Prigorodnoje production complex. After two decades of continuous operation, the three existing Liebherr offshore cranes had to be refurbished.

Liebherr undertook this work and will replace two of the offshore cranes in full whilst the third one will be modernised and continue in operation. This is an extraordinarily demanding modification project which requires painstaking planning, logistics, technology and skill. Since the project was started in 2016, over 6000 hours of planning have already been invested in it. The replacement of the first offshore crane with a brand new Liebherr RL 1500 was completed between spring and autumn 2018. 24 Liebherr personnel of various nationalities and from different Liebherr companies were involved in the first phase of the project. 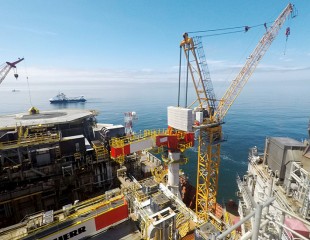 The Tower Crane Solutions Department created a superb support solution to enable large components to be moved on the platform – a 230 HC-L 8/16 Litronic luffing jib crane with a jib length of 30 metres and a maximum lifting capacity of 16 tonnes. As a result of the extremely constricted space available on the platform, the crane was erected on the new 24 HC tower system and so-called anchor shoes. This means that the crane has the smallest possible footprint of just 2.6 x 2.6 metres.

In addition to the 230 HC-L 8/16 Litronic, the Liebherr service department designed and built a special sliding system to move particularly heavy components and modules over the platform. As a result of the extreme weather conditions and the limited space on the platform, the Liebherr personnel from different divisions worked very closely together, demonstrating a very high level of professionalism and concentration.

The second phase, the modernisation of the existing offshore crane, has already been completed. The entire modification project is scheduled to be completed by the end of 2020. Overall, Liebherr was once again able to provide the customer with a fantastic full service package from a single source – including our special solution: a luffing jib crane for offshore use.