Revenue generated by the Mobile and Crawler Cranes product segment amounts to € 2,504 million in 2020, representing a decrease of € 127 million or 4.8 % compared with the previous year. 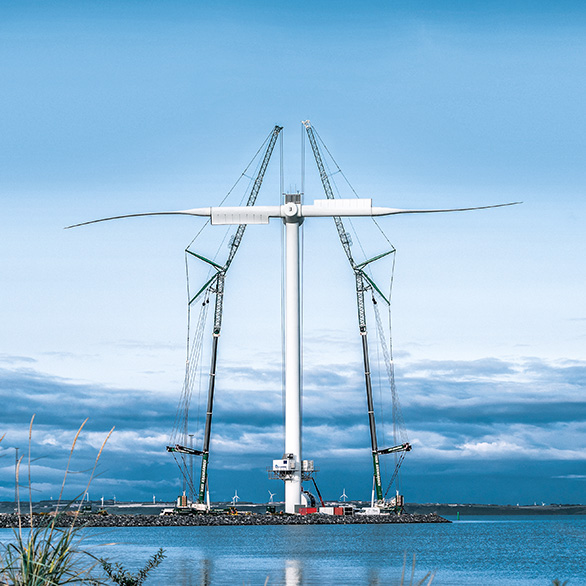 There was a slight slowdown in growth in the global mobile crane market in 2020, which also created some sideways movement in the crawler cranes market. Demand for telescopic and crawler cranes grew due to the many economic stimulus packages that were implemented around the world as well as due to the resurgence of the wind power sector, especially in Europe. Liebherr was able to maintain its share of over 50 % in the global telescopic crane market. It also ranks among the top three manufacturers of crawler cranes.

Despite continuing difficulties across the sector, sales continued on a positive trajectory, but were slightly below the previous year. In the product segment's key markets, the European Union region grew slightly with highly favourable results in Germany. Sales in the non-EU countries and North America declined. Sales in Central and South America took a downturn, and there was a slight slowdown in growth in the Near and Middle East, although strong growth was recorded in the United Arab Emirates. The Asia and Oceania region remained stable and there was significant growth in South Korea in particular.

The previous financial year saw the arrival of many product developments which set new standards in terms of performance, cost-effectiveness and environmental sustainability.

Liebherr successfully presented a number of new products online in 2020. This includes the new LTM 1150-5.3 telescopic crane, which has a maximum load capacity of 150 tonnes and features a 66-metre telescopic boom. Among the other product launches were two of the first battery-powered crawler cranes in the world – the LR 1200.1 unplugged and the LR 1250.1 unplugged. The two cranes match the performance of conventional models whilst featuring electric motors and fulfilling the requirements of the Local Zero Emission concept. They do not produce any emissions, generate considerably less noise and are CO2-neutral when powered by sustainably generated electricity. Approximately 750,000 people attended these two online product launches.

Liebherr also set new standards in cost-effectiveness and performance with the LTM 1120-4.1, the most powerful 4-axle mobile crane on the market. Thanks to its 66-metre boom and high lifting capacity of 120 tonnes, it can handle operations that previously could only be carried out by a 5-axle mobile crane. Research and development efforts sought to continuously optimise the product portfolio and to increase customer value. In terms of investment, the product segment focused primarily on infrastructure and logistics.

In view of the good order situation and the anticipated implementation of economic stimulus packages, Liebherr envisages that sales in the Mobile and Crawler Cranes product segment will return to 2019 levels in 2021.