Liebherr Generation8 crawler excavators are successfully penetrating the French market. Corsica in particular, with its thriving market for crawler excavators and all other construction machinery, represents an important sales area. The high versatility and performance as well as the comfort and design are really impressing the local customers.

The R 934 crawler excavator for customer Graziani TP was the first Generation 8 excavator delivered to Corsica. Frederick Graziani, the company's managing director, is particularly satisfied with the stability during work and the performance combined with low fuel consumption of just 18 l/h.

The strengths of the R 934 crawler excavator are the higher engine power, the larger bucket capacities, and the lower fuel consumption.

The strengths of the R 934 crawler excavator are the higher engine power, the larger bucket capacities, and the lower fuel consumption.

In addition, he particularly appreciates the reliability and versatility of the excavator. This allows the company to take on larger jobs, such as demanding earthmoving work or large-scale rock crushing. This in turn enables solid growth for Graziani TP.

Decisive purchase criteria for Frederick Graziani were also the origin of the excavator, which is produced in Europe, and the good reputation of the Liebherr brand. According to the managing director, Liebherr represents a very good price-performance ratio and efficient customer service. 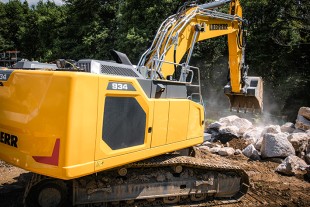 The R 934 in the completely new design of Generation 8.

The R 934 in the completely new design of Generation 8.

Efficient and versatile use

In Balagne, at the other end of the island, there is also a satisfied customer who specialises in quarrying rock. Valérie Mercuri, managing director of the company Sablière de Calenzana from the town of the same name, particularly appreciates the versatility of the R 945 crawler excavator. On the one hand, dump trucks can be loaded very quickly, and on the other hand, the flexible changeover from bucket to a hydraulic rock breaker also allows drilling work for easier placement of explosives.

The R 945 replaces an older Liebherr excavator at the customer's site that has already completed enough operating hours to be replaced. The new model is even more manoeuvrable, lighter than its predecessor and at the same time significantly more effective and efficient. Like all Generation 8 excavators, the R 945 is equipped with Liebherr's "Positive Control" hydraulic system, which forms the basis for smooth combined movements and an overall increase in performance.

Valérie Mercuri particularly appreciates these technological advancements, which enable fuel consumption to be reduced by around 20 % to just 23 l/h, and this with even better performance data. 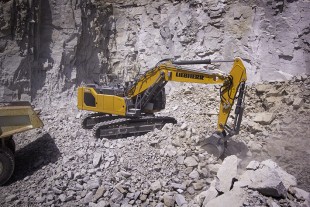 The high load-bearing capacity and digging force round off the excavator's performance spectrum. Also noteworthy is the optimal comfort for the operator thanks to the noise reduction in the operator's cab and more safety thanks to the LED lighting and full all-round visibility.

The operator has a spacious and comfortable workspace at their disposal in all working situations. The Generation 8 excavators offer a high level of operator comfort with reduced vibrations and a low noise level. To make daily work easier, the cab is equipped with an air-sprung seat with vertical and longitudinal shock absorption.

Liebherr customer service is also a big plus for all customers and operators. The Liebherr branch in Marseilles, located in the suburb of Rognac, addresses all customers' concerns and ensures a fast and tailored service.

In addition to technical requirements, design is also an important criterion. The appearance of a machine continues to play an essential role in companies' purchasing decisions.