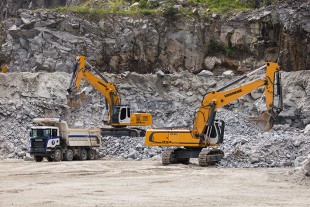 The first two R 954 C SME excavators, manufactured by Liebherr Brasil in Guaratinguetá (SP), were delivered to Riuma quarry, located in the region of Jaraguá (SP). The machines have been operational since July and August 2015 and have performed even better than the expected. This 50-year-old quarry mainly produces aggregates for civil construction at a capacity of 800 tonnes per hour. The new Liebherr 60-tonnes crawler excavators arrived to fulfill their mission: improve the cost/production ratio of the quarry.

According to Riuma Quarry, the excellent build quality of the Liebherr R 954 C SME crawler excavators is fully suitable to the operation: “One of the biggest challenges of the new machines is that of excelling the other equipment on site, and, from what we were able to assess to date, the production/consumption ratio is very good and the availability of the machine is great”, affirms Roberto Iudice, owner and partner of Riuma.

The new 60-tonnes excavator is equipped with an S-HD (Super Heavy Duty) undercarriage, D8K chains, same as the Liebherr R 964C / R 966 crawler excavators, 600mm standard track pads with dual clamps, bi-supported overhead rollers, drive train with dual teeth and belt guide. With 10 tonnes less than the next class of Liebherr excavators, the 70-tonnes, this machine has faster operational cycles – which when combined with the lower fuel consumption – will generate a better cost/production ratio. At the operation of Riuma, the 40-tonnes trucks are loaded on average with eight cycles. According to the quarry, the fill rate of the trucks is substantially higher than the rate obtained with other equipment, due to the excellent dimensions of implement and buckets.

Riuma works in a very systematic way regarding the analysis of results, involving complete studies of costs, production, comparisons with other machines operating at the site, and also after-sale services. The company prides itself on working closely with its partners and suppliers to ensure a fast and efficient after-sales service. This is another reason for choosing to continue its partnership with Liebherr.

Basalto Quarry is also pleased with the results presented by the R 954 C SME operating since November of 2015 at the quarry located in Itapecerica da Serra, São Paulo. According to Mr. Darcy Braga, director of the quarry, Liebherr’s abilitly to supply the machine within the timeframe required along with the competitive pricing and the excellent after-sales service history provided by Liebherr to the quarries existing machines were their reasons for purchasing these new crawler excavators. “The R 954 C SME machines have more than met our requirements. They are robust and the availability is very good. The performance of the machines has increased productivity”, says Mr. Darcy.

The newest R 954 C SME crawler excavator produced at the Liebherr facility in Guaratinguetá (São Paulo) was delivered in November to Geocal, another large quarry established in the region of Santana do Parnaíba, also in the metropolitan region of São Paulo. With a high monthly production of limestone and gravel, the quarry relies on a fleet almost completely composed of Liebherr equipment. 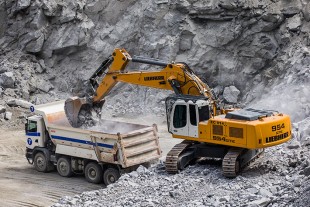 Liebherr has designed the SME attachments and hydraulics exclusively for this machine. Larger hydraulic cylinders were added. Furthermore, Liebherr has reinforced the superstructure parts that are subject to greater stress with high-resistance cast steel. This increases the structural reliability of the equipment as a whole.

Compared to the standard version R 954 C, this leads to 29% more excavation power (arm) and 11% more tear-out force. This configuration improves both performance and economy per tonne produced.

The centralized lubrication is standard with this machine and ensures greater efficiency. In addition, with this undercarriage, the ground clearance is higher, what minimizes the impact of rocks to the lower frame.

The Liebherr R 954 C SME is an excellent option to customers with 50-tonnes equipment, who want to increase their production without increasing their operational costs. This size of machine should also appeal to customers who have a 70-tonnes equipment and are willing to have a lower class model to optimise costs, without a substantial change to production. With this new machine, Liebherr is able to offer customers the choice of equipment that will best fit their respective operational conditions and requirements. 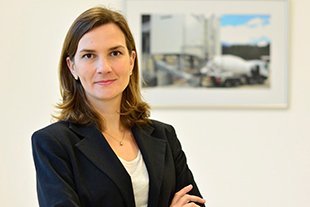