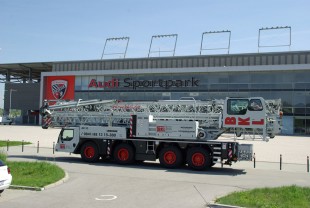 BKL Baukran Logistik opened its fourth site in June 2014. It means that the company now also has a presence in Ingolstadt in addition to its Munich, Frankfurt and Hanover sites. Currently BKL customers can select from six new Liebherr mobile cranes, an MK 88 Plus mobile construction crane with extended load curve and the company's own trucks.