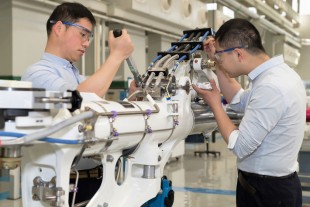 The acquisition of the MOC by LLA marks its entrance into the MRO business as the first Chinese CCAR-145-compliant entity that has been approved for repairs of ARJ21 landing gears.

Liebherr LAMC Aviation (Changsha) Co., Ltd. was founded in 2012 and supplies landing gears for two of COMAC’s aircraft programs, the ARJ21 and the C919.The first ARJ21 landing gear had been delivered by LLA in 2016, the 100th landing gear strut for the ARJ21 three years later, in 2019.

The LLA campus comprises an almost 54,000-square-foot, state-of-the-art facility, equipped with two separate assembly lines – one for each program, the ARJ21 and C919. Its robust ERP system allows the company to have full logistics responsibility, streamlining planning, procurement, and inventory turnover. The plan is to grow not only deliveries of new final shipset assemblies but also the maintenance and repair of existing landing gears from established operators in the region.