From 9 to 12 September 2014, Liebherr is presenting components and system solutions for a wide range of maritime applications at the SMM, the specialist trade fair in Hamburg. 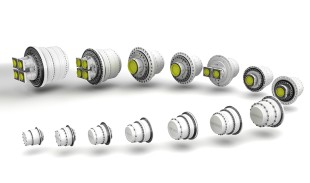 At the international trade fair for Shipbuilding, Machines and Maritime Technology (SMM), which takes place from 9 to 12 September 2014 in Hamburg, Liebherr is presenting a wide range of products from the areas of hydraulics, large diameter bearings and gearboxes. One focal point will be the presentation of application-specific solutions. The high-performance components and system solutions developed by Liebherr are suitable for a wide range of maritime applications such as cranes, ship propulsion systems and special equipment, for example in pipe-laying ships or jack-up platforms.

At the heart of the Liebherr-Components stand is the offshore crane. This application will be presented in almost 1:1 scale with components for offshore rope winches and a slewing mechanism at stand 115 in hall A3. The slewing mechanism of the crane, consisting of ball bearing slewing ring KUD128VJ and slewing drive DAT 250, is powered electrically. A planetary plug-in gearbox for use in rope winches and a hydraulic twin motor with throughdrive option enhance the extensive range of products. 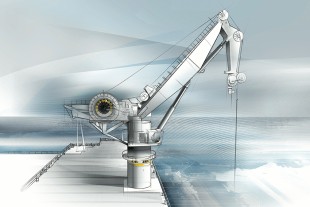 The 14 model sizes of type PEG 250 to PEG 1100, which are offered in a variety of transmission ratios, have been revised in terms of design and have been re-evaluated in terms of performance. It was possible to increase the maximum dynamic torque on average by 8.6%. The smallest gearbox has a dynamic torque of 6,000 Nm and the largest can produce a dynamic torque of 944,000Nm (with load spectrum L2, operating class T5, categorised according to FEA). The standard gearboxes designed for horizontal installation in rope winches can be adapted for drives powered by both electric and hydraulic motors and are thus very flexible.