Crane contractor Haslach GmbH, based in the Allgäu region, has taken delivery of a new LTM 1130-5.1. The Liebherr 130 tonne crane is the fourth of this model which the company from Wertach has bought over the last few years. 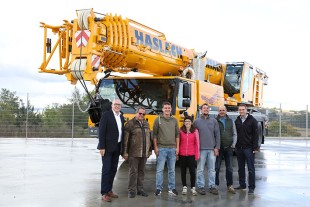 Haslach currently has three LTM 1130-5.1 cranes in its fleet. Company owner Eugen Haslach explains: “We decided to buy another LTM 1130-5.1 because we are very happy with the machine’s performance and overall handling. It also means that we can swap accessories and equipment between our three cranes. Another benefit is the fact that our crane operators can switch flexibly between the cranes.” The crane hire company ordered its new LTM 1130-5.1 with a 2.9 metre special folding jib and a second hoist unit. One of its main area of use will be assembling prefabricated parts.

Haslach purchased its first Liebherr crane in 1978. Over the decades, the family-run company, in which the third generation is now playing an operative role, has ordered a total of 22 cranes from Liebherr. Over the last few years, Haslach has invested regularly in new mobile cranes with innovative technology which means that the company now has a modern fleet. Currently, Haslach has an all-Liebherr fleet comprising 8 mobile cranes with lifting capacities ranging from 40 to 200 tonnes. “Because we are so close to the manufacturing plant in Ehingen in Swabia, the reliability of the cranes and the fact that they hold their value well are among the main criteria why we continue to place orders with Liebherr. We appreciate our good, long term business relationship,” says Eugen Haslach.