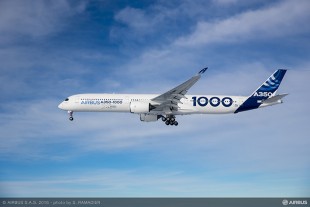 The longest-fuselage version of Airbus’ A350 XWB program, the A350-1000 successfully completed its maiden flight on November 24th, 2016.

Alongside the nose landing gears, Liebherr-Aerospace Lindenberg GmbH, Lindenberg (Germany) also develops, supplies and services further important components for the A350-900 and A350-1000 programs: the slat actuation system, the flap active differential gearbox as well as the load sensing drive strut and the moving damper.

The company is supporting both Airbus and the airlines according to their requirements with maintenance and customer service throughout the entire life cycle of the aircraft.