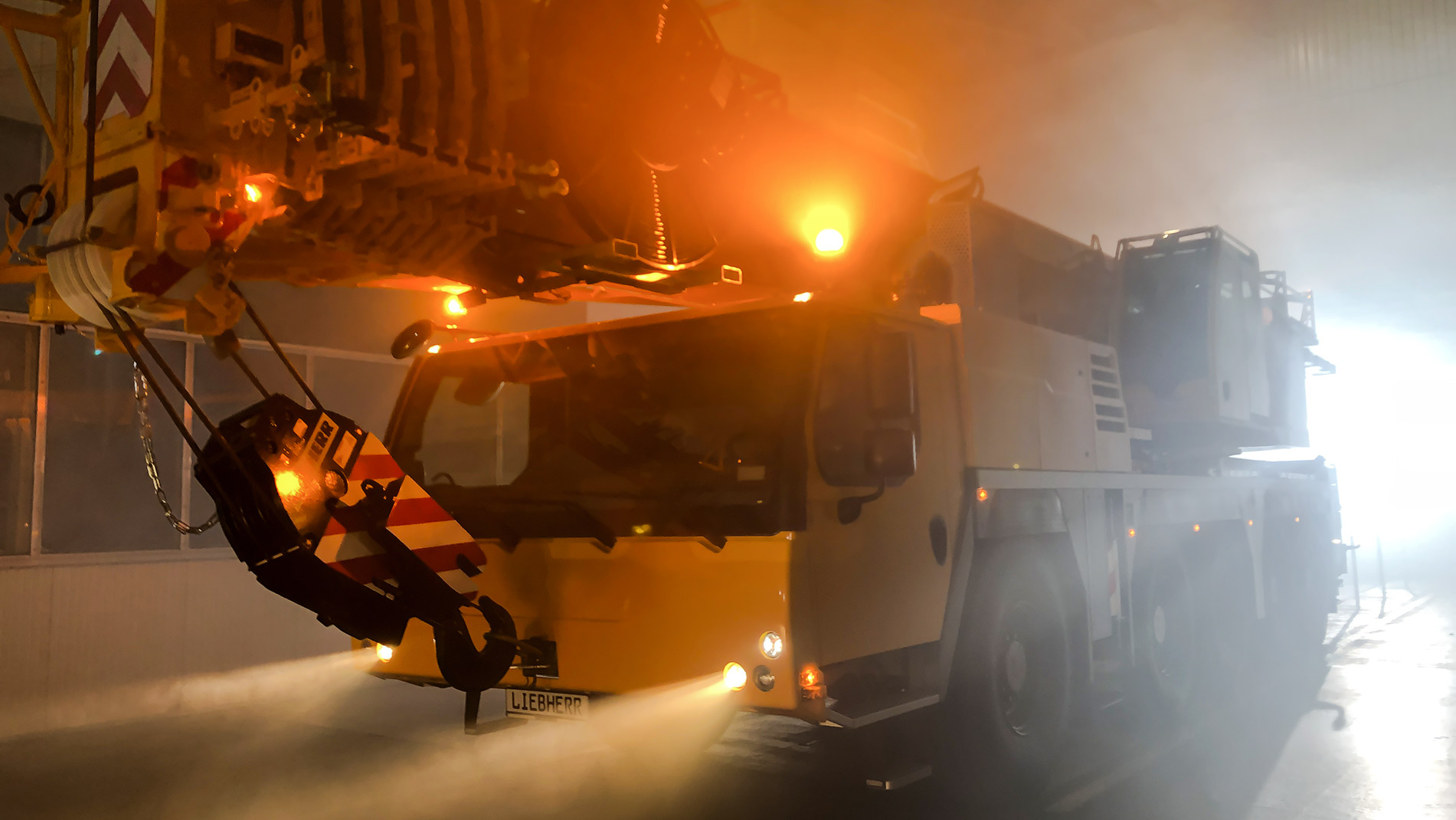 The curtain has fallen

At the start of 2020, the Sales, Marketing and Product Management Departments in Ehingen were planning to unveil the new LTM 1150-5.3 mobile crane during the second half of the year at the autumn trade shows – as normal, in other words. Afterwards it was due to move on to the Intermat in Paris. 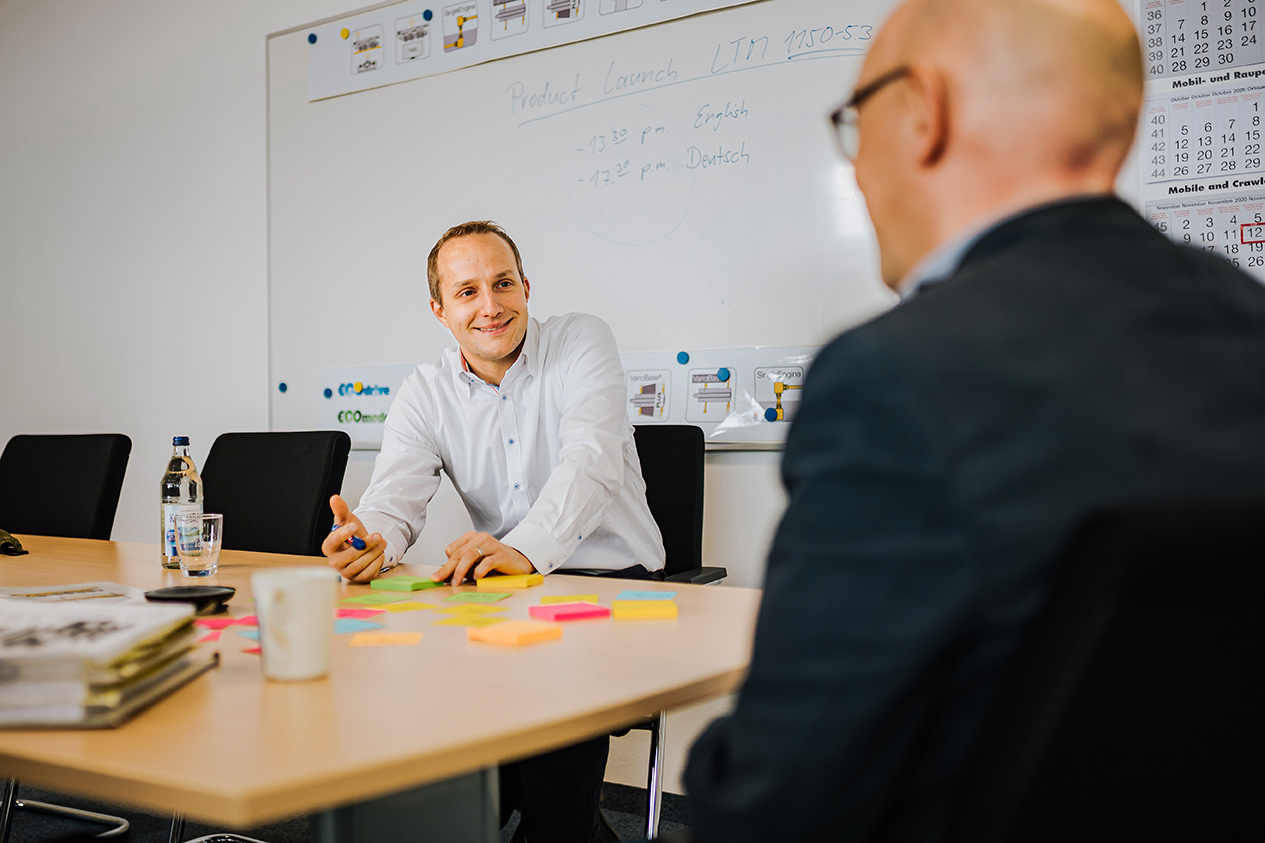 Tobias Ilg, Head of Marketing at Liebherr in Ehingen

Virtual unveiling of a new masterpiece

But it all came to nothing. Like so much else in 2020, the unveiling of the new 150 tonne crane simply did not go to plan.

Whilst the design work for the LTM 1150-5.3 continued during summer 2020 and the first prototypes were built, Tobias Ilg, Head of Marketing in Ehingen, and Jan Keppler, Head of the Product Management Team, had to ask themselves a question: How do we unveil our new masterpiece if the autumn trade shows are going to be cancelled because of coronavirus? During a brainstorming session together, maintaining social distancing, of course, one thing quickly became clear – the unveiling process would have to be virtual. “What has long been standard for major manufacturers of consumer goods, was something completely new for us at the time”, explains Tobias Ilg. 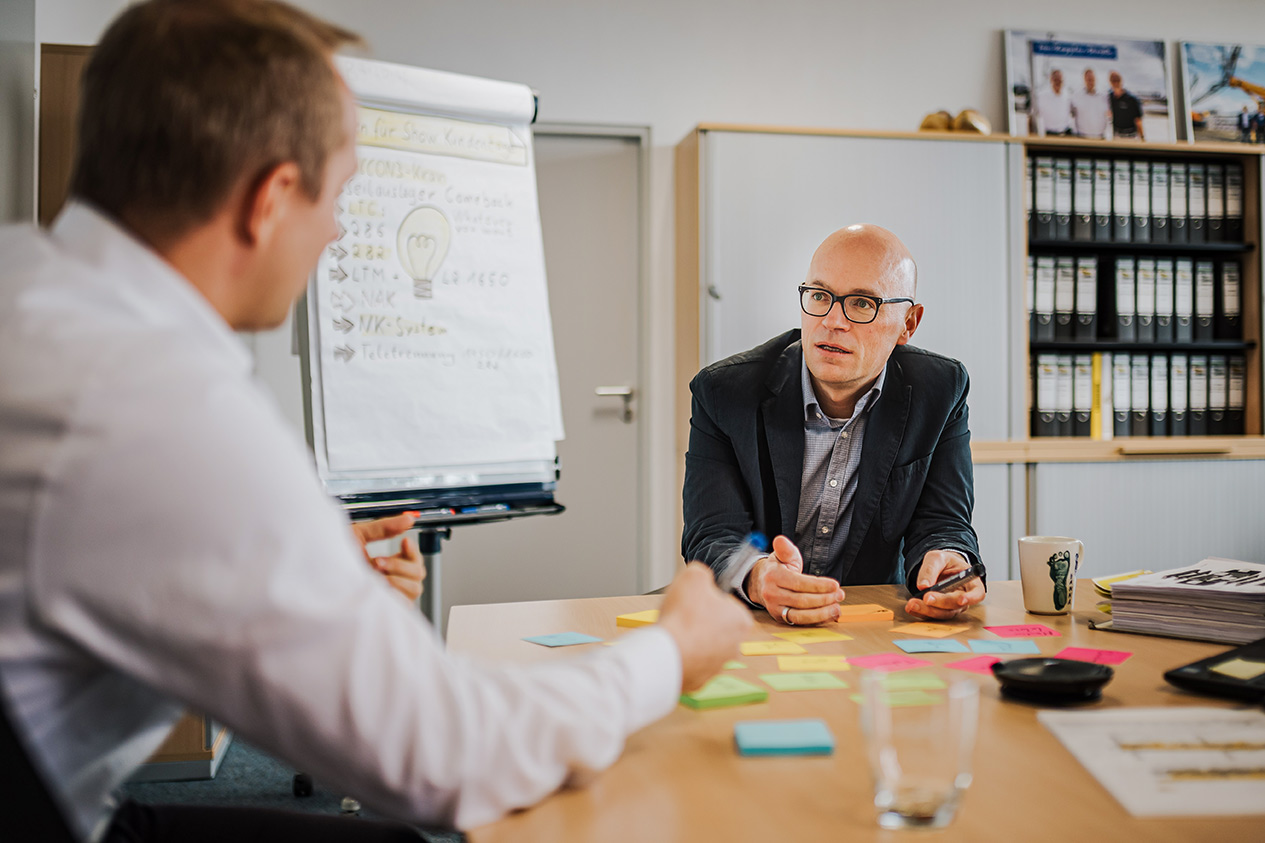 Jan Keppler, Head of the Product Management Team at Liebherr in Ehingen

Strengths can be shown in virtual form

A mobile crane is an impressive site solely due to its size. The new LTM 1150-5.3 has other features, however: A lifting capacity of 150 tonnes. At 66 metres, the longest boom in this lifting capacity class. And the ability to carry nine tonnes of ballast at an axle load of 12 tonnes. The new crane has been designed to be as economical as possible – it can tackle many of its jobs without requiring additional ballast to be transported. The LTM 1150-5.3 also ventures into the 200 tonne class with its lifting capacities. In short – it is a real jewel for any crane contractor.

But could these features be demonstrated equally impressively at a virtual launch as a live event at a trade show stand? A new smartphone can be shown off in a virtual event with great ease. But a new crane? How long will a viewer watch a virtual presentation? How much action must it contain? How many facts will the viewer be able to absorb? What does virtual actually mean – what technical challenges will have to be overcome? 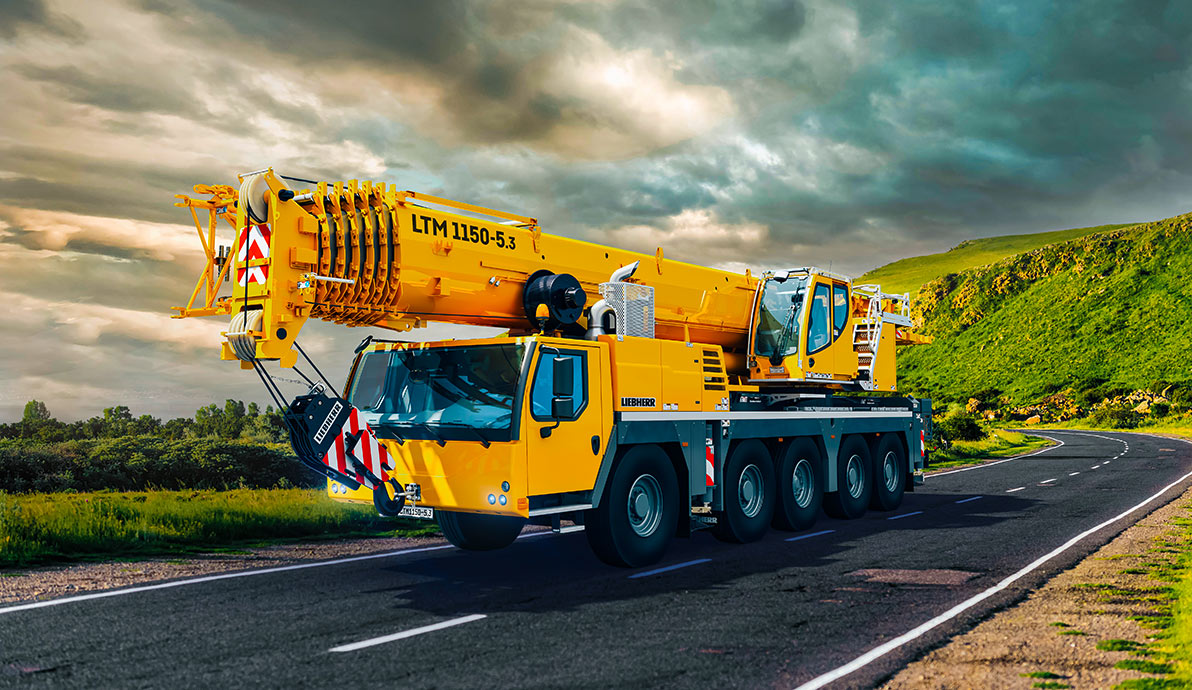 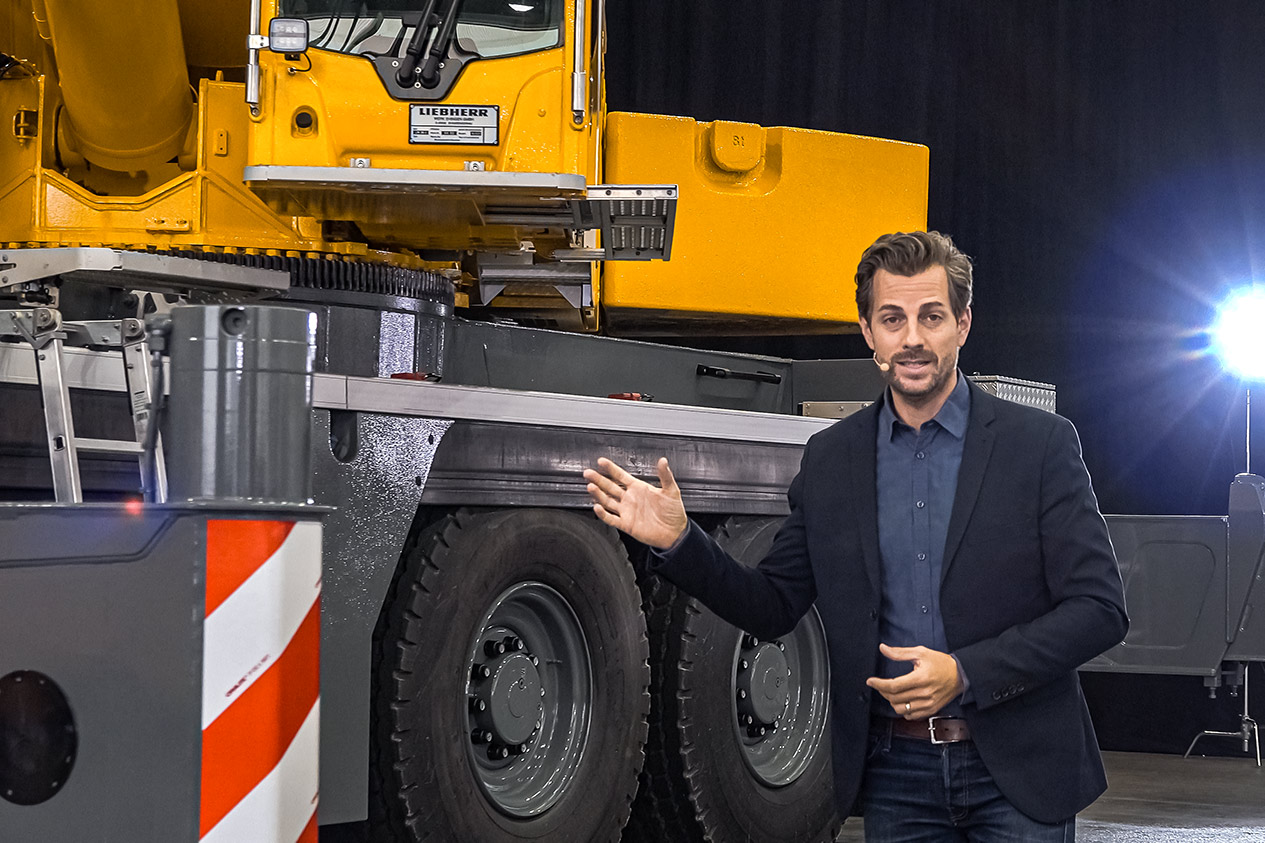 Martin Kloss providing live insights into the technology featured on the new LTM 1150-5.3.

From finding the answers and new benefits

It was a long haul to get from the idea to finding the answers to these questions and finally organise the event. First of all, Tobias Ilg and Jan Keppler had to prepare a script and produce all the technical requirements using the script as a basis. Long term film and media partners were brought on board to implement the ideas created by the pair. The closer the first virtual unveiling of a mobile crane came, the more exciting things became. However, it was not until of the 5-axle crane had been painted in full and stood there in all its glory, that the concept was reviewed to ensure that it was actually possible. “That’s when things got really exciting. We had to recheck that everything was possible. Would we really be able to put across the positive aspects of the crane in just ten minutes? Would that be enough? Or are we actually giving people too much information?”, is how Jan Keppler sums up the final plans for the live stream. 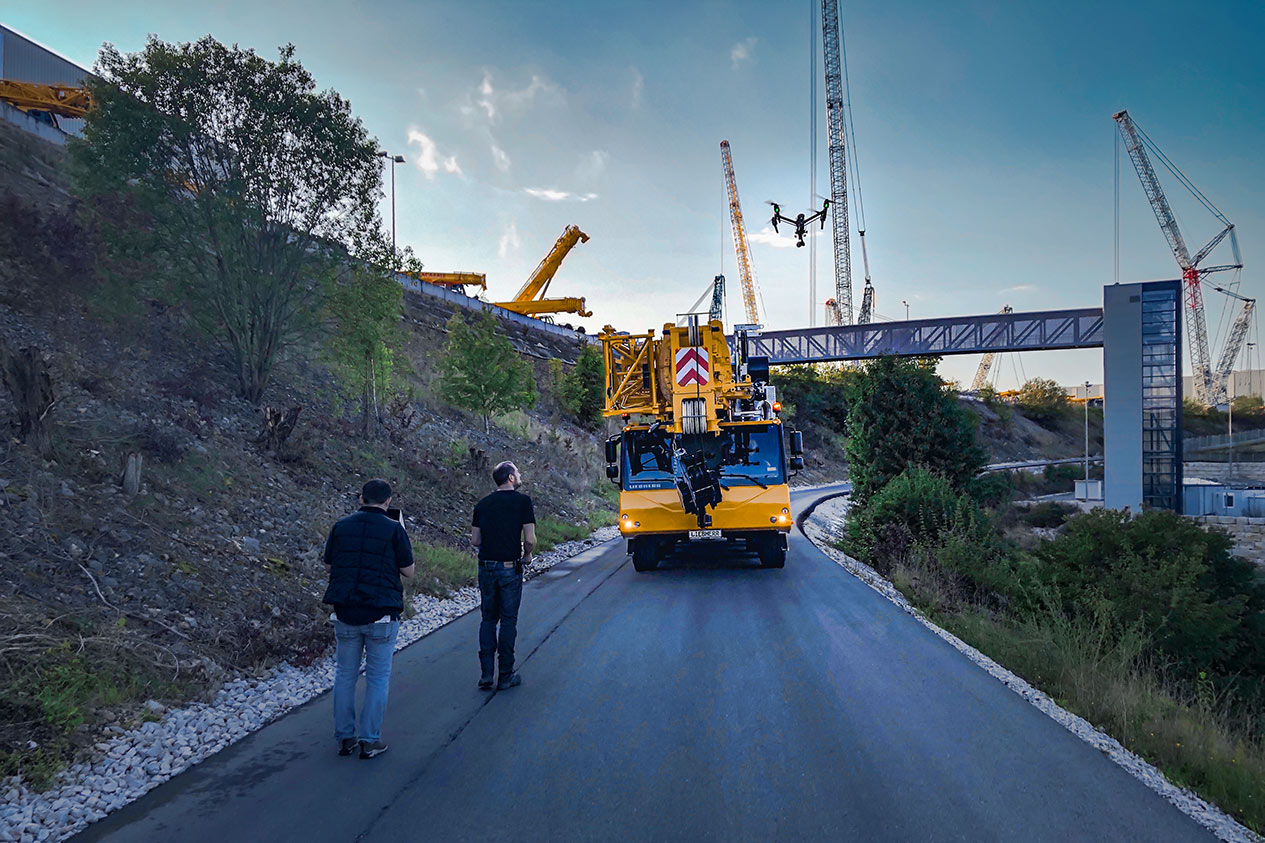 Preparing for the live event – the action shots.

Ultimately, although the virtual launch posed lots of new questions, it also delivered a major benefit. In addition to customers from all over the world who had been invited by the Sales Department and would also have been present at the autumn trade shows, it made it possible to access an even broader audience. “We made a conscious decision to tell the operators, engineers and crane fans about the event. And since we were live, we also decided to provide an opportunity to ask questions on a chat facility – which we answered during the actual live stream”, adds Ilg. This was done by means of an extensive communication campaign on social networks. The new jewel for every fleet and its launch were published on Facebook, LinkedIn, Instagram and YouTube.

One day before the broadcast of the live stream, the handover building at the Liebherr Plant in Ehingen was turned into a film studio. Extensive rehearsals were staged. It was clear that this new 5-axle masterpiece was not going to be unveiled with simple mobile phone images as every movement had to be coordinated. That is why moderator Martin Kloss, who you may know from our video magazine, went through everything several times in advance with the director, lighting engineers and cameramen. 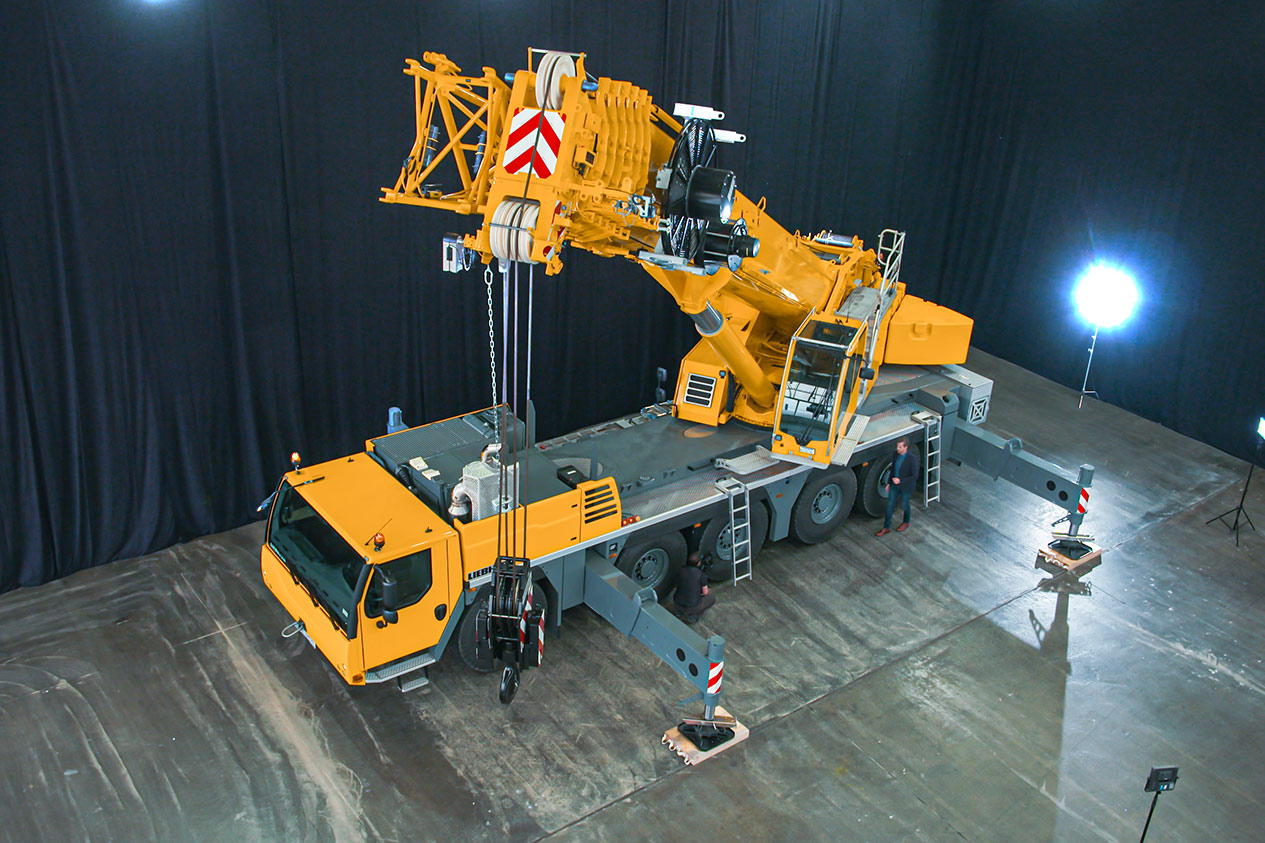 In the footlights – the new 5-axle crane on the set ready for filming.

And then on 20 October, the time had come – the new LTM 1150-5.3 was first launched in English and then in German. Martin Kloss welcomed several thousand viewers at home, at work or out and about. “It was a magic moment for us – nobody knew how many viewers would actually want or be able to watch the unveiling of the new 150 tonne crane live. And whether the broadcast equipment would work as planned”, adds Ilg. The facts about the crane were presented in short and snappy form: Long. Powerful. Strong. Mobile. Kloss’ presentation was interspersed with impressive driving scenes which had been produced earlier. It would have been too technically complex to film those scenes live. Martin Kloss then said goodbye to the viewers around 12 minutes after he started.

“Our digital world première attracted over 750,000 viewers on various platforms – with really positive feedback about this type of presentation”, says Ilg. Crane fans from Australia to Canada, from South Africa to Norway all watched as the first images of the new LTM 1150-5.3 were shown. “This crane we launched and presented digitally has been designed to be extremely economical to use. That’s a double highlight for me”, is Keppler’s summary.

At the end of the first live stream, the LTM 1150-5.3 stood gleaming in the footlights and Martin Kloss ended with a few words which we would like to share with our readers: “So we would be delighted to see this masterpiece in your fleet and in your livery soon.”