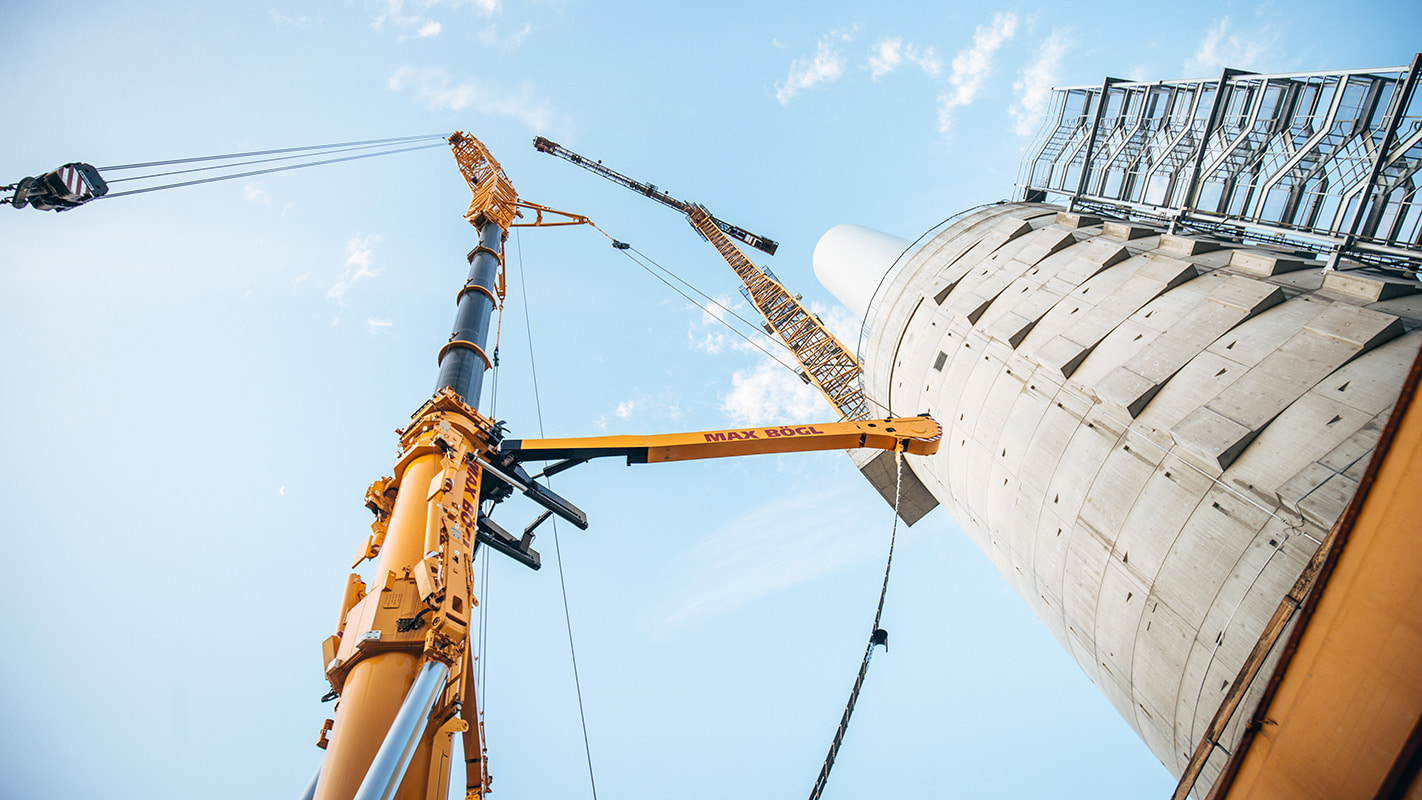 One of the most exciting systems of the future in the energy revolution is currently being constructed near Schwäbisch Hall. The "Gaildorf green electricity storage facility" pilot project sees wind turbines combined with a decentralised pumped-storage power plant make green energy storable for the first time, making it available flexibly.

Full concentration. Everybody is looking up. You could hear a pin drop on the site. Slewing freely, the Liebherr 630 EC-H 70 Litronic tower crane hoists the rotor blade which measures almost 70 metres long and weighs 17 tonnes. Very slowly. Right up to the hub of the wind turbine at a height of 178 metres.

Never before has a wind turbine of this size been built. Crane drivers Wilhelm Lepertz and Georg Brodwolf therefore took on this challenge together up in the tower crane. Four eyes can see more than two. They are in contact with Thomas Ziegenbein by radio. The Wind Installation Project Manager at international construction contractor Max Bögl is the direct link between the crane drivers and the ground crew which is responsible for securing and controlling the suspended components with ropes from inside the forest. All of them are concentrating hard. The only sound that can be heard around the site are the radio messages being sent between the site manager and the cabin. There is a great sense that a piece of engineering history is being written today. 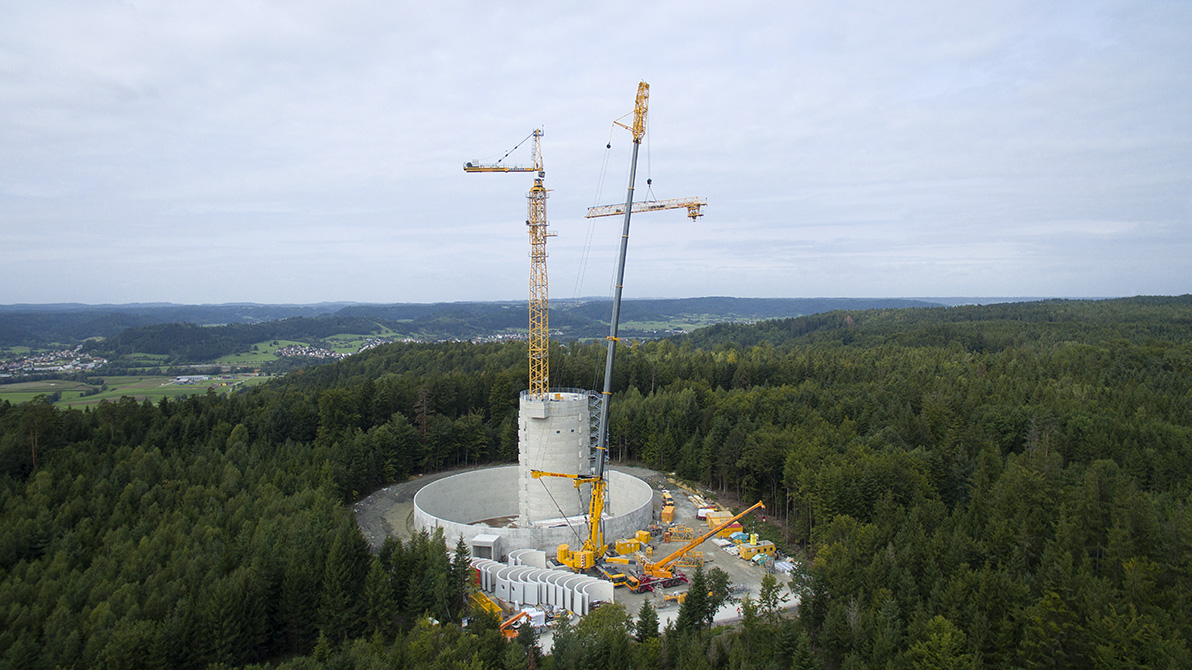 The energy revolution is currently being taken to a whole new level in Gaildorf, in the Swabian-Franconian Forest on the Limpurg Hills. The Wind Division of international construction contractor Max Bögl is not only erecting the highest onshore wind turbine in the world, measuring 246.5 metres, but the water battery (a completely new, decentralised energy storage technology) is also the very first of its kind with its four wind turbines. "The water battery is a combination of the wind farm and a pumped-storage power plant. This enables wind power to be stored, controlled and above all supplied when it is actually needed in the power network," explains Overall Project Manager Johannes Kaltner. The active and passive tanks at the foot of the wind turbine store the power. They will later be connected by a pressurised pipeline to the water reservoir of the bottom tank with the pumped-storage power plant between them. "The installation work for the water pipelines will start in spring," says Kaltner. 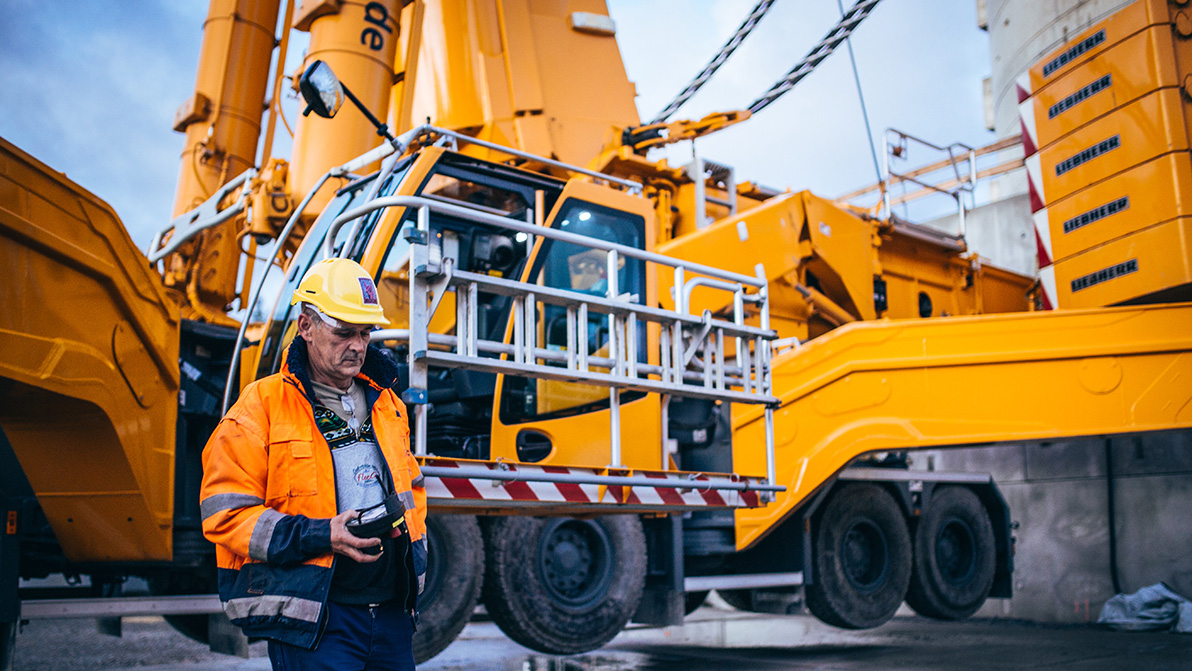 Crane driver Ralf Karras from Max Bögl has christened his LTM 11200-9.1 "Hercules" out of respect.

During the construction of the facilities in Gaildorf, the mobile and tower cranes combined closely. However, crane driver Ralf Karras and his LTM 11200-9.1 mobile crane initially started work on building the active tank on their own. The job at that time for him was to hoist the 22 tonne quarters of the bottom concrete shells off the low loaders, assemble them on the crane assembly area and install them into the facility with one 88 tonnes hoist.

It was not until the active tank at an altitude of 40 metres was in place that the tower crane could be erected on this foundation. Karras received a total of 22 truckloads, six of which were heavy haulage trucks. "I hoisted the first crane modules using my LTM, then the tower crane erected itself using its special self-climbing hydraulic system", says Karras.

Karras comes from Berlin and is a passionatecrane driver. Using the joystick he controls his enormous LTM 11200- 9.1 mobile crane which he has christened "Hercules" out of respect. And there is a very good reason for this. The 9-axle Liebherr mobile crane has one of the longest telescopic booms in the world at 100 metres and delivers a maximum lifting capacity of 1200 tonnes. "I always dreamt of becoming a crane driver. It involves massive power and capacity with years of experience and fingertip control. My crane and I make a great team, staying calm and relaxed when things are happening up in the air."

Since the foundation stone was laid in April 2016, around 35 tradesmen have been working full-time in Gailsdorf. It is the attraction of innovations and finding out what is technically feasible which continues to drive his team, says Johannes Kaltner. "The fact that this site represents a whole new chapter of the energy revolution is not an everyday occurrence, even for experienced wind power professionals", says Kaltner.

Erecting four wind turbines in the middle of a forest is not just a technical challenge, but also a logistical one. There is no space in the forest for large storage areas. "Therefore our logistics team has to deliver on a just-in-time basis. At the foot of the system there is only space for one rotor blade to be hoisted", says Thomas Ziegenbein. After that the mobile crane has to get to work again and hoist the next heavy blade from the site access road over the treetops and move it into position. "The hard work is worthwhile", says Ziegenbein. "When we have gone, Mother Nature will quickly reclaim the whole area." 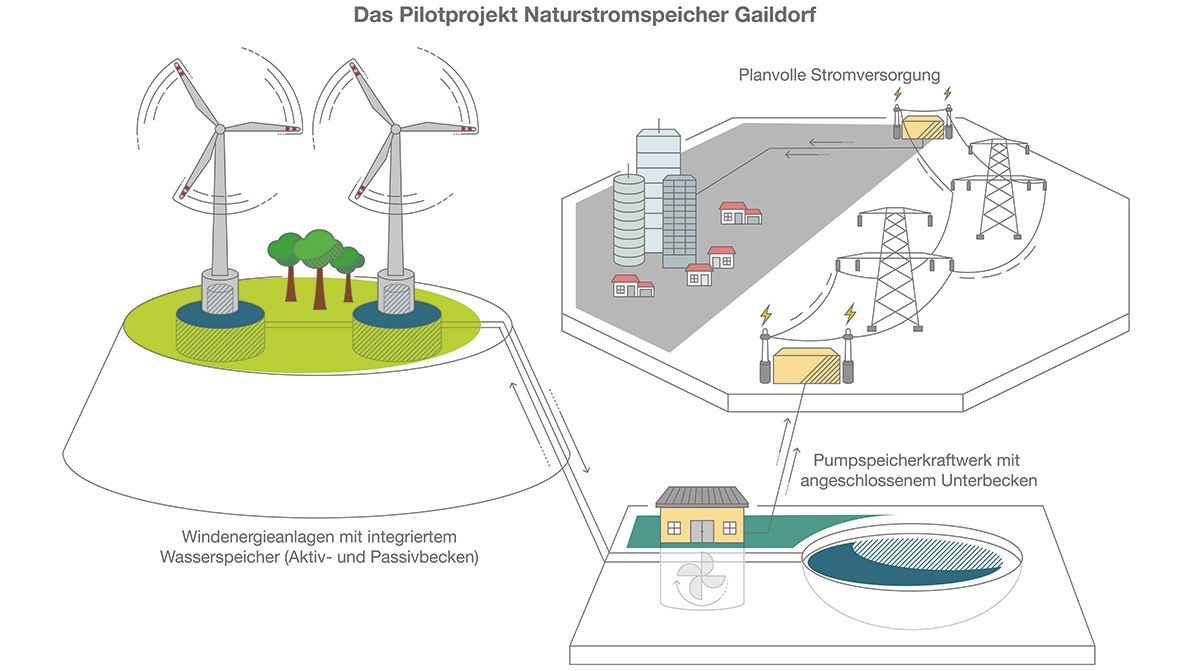 Each of the wind turbines has a rating of 3.4 megawatts. A total of 160,000 cubic metres of water will be used to store the energy in the active and passive tanks. The reservoir is connected to the generator in the pumped-storage power plant by underground pressurised pipelines. When the wind blows, the electricity that cannot be fed into the network is used to pump the water into the wind turbines' integral reservoir.If the wind is not blowing, the water is released downhill to drive the turbines in the pumped-storage power plant. This means that the wind farm can continue to generate electricity on a reliable, plannable basis and feed it into the network. The combination of wind and hydroelectric power ensures the uniform, planned supply of households, business and industry with green electricity. The annual electricity generation in Gailsdorf from the wind may be up to 42 gigawatt-hours.

The fact that this site represents a whole new chapter of the energy revolution is not an everyday occurrence, even for experienced wind power professionals.