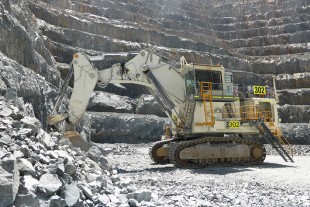 Evolution Mining has recently taken delivery of a new Liebherr R 9400 excavator at their Lake Cowal gold operation near West Wyalong in far western NSW. This latest addition to the Liebherr fleet at Lake Cowal mine is confirmation of the confidence in Liebherr and the support that goes with every machine. Commissioning of the R 9400 took five weeks from the machine’s arrival on site.

The new R 9400 joins two other Liebherr R 994 B excavators on site, one of which was commissioned in December 2005 with a current SMU of 75,000. It holds the record for the highest SMU in this class in the southern hemisphere; not far behind the world record holder of a Liebherr R 9350 in Russia with 76,000 SMU.