Liebherr Container Cranes Ltd. is delighted to have completed their first ship to shore lift height increase with their new patented jacking system as part of Liebherr-Transform. The operation was conducted under the supervision of Liebherr engineers at Patrick Terminals – Brisbane Autostrad. 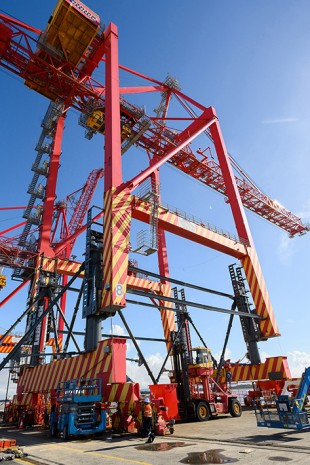 The STS has been jacked up, waiting for the extensions to be moved into place

The STS has been jacked up, waiting for the extensions to be moved into place

Brisbane Autostrad located on the eastern coast of Australia is one of the world’s most advanced container terminals. Liebherr has two ship to shore container cranes at the terminal, a new STS currently being commissioned and an STS supplied in 2015. The 2015 crane has a supplied lift height of 37.5 m, but with larger vessels calling at the port, a lift height extension was required.

Patented system for a quick turnaround

Liebherr has been carrying out lift height extensions for many years, but in 2022 a new patented jacking system for lift height extensions, was deployed at the Brisbane terminal for its first use. Designed and built in Liebherr Container Cranes in Ireland, one of the key features of the system is that it uses the crane’s end carriage as a solid base for jacking the crane structure, eliminating the requirement for additional equipment. Furthermore, since the system uses the crane structure as a basis for jacking, the loadings are low and are carried through the existing crane.

Preparation takes a couple of weeks and the flexible system allows the crane to be jacked in position or moved back from the rails for jacking if required. The actual crane raise and the insertion of the extensions can be completed in a number of hours and so is suited to terminals prone to high winds. The operation is exceptionally quick and the whole process can be completed from as little as four weeks per crane. Following completion of the project, the jacks are containerised and shipped onwards for their next deployment. 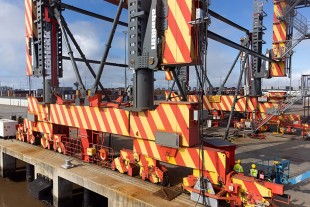 Detail view of the STS waiting for the extensions.

Detail view of the STS waiting for the extensions.

GCT New York LP operates four Liebherr ship to shore container cranes. Supplied in 2004, the cranes have a lift height of 36.57 m and an outreach of 50 m. Working in partnership with Liebherr USA, GCT will undertake a significant Liebherr-Transform project to extend the lift height of the cranes by 8.6 m and the outreach of the cranes by 5 m (two bays). When complete, the cranes will have the ability to work the largest vessels currently calling the port of NY/NJ allowing GCT to better service their customers. 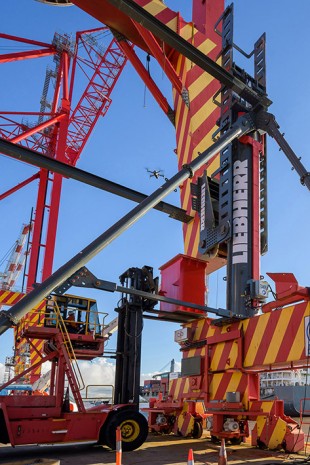 The leg extensions are put into place.

The leg extensions are put into place.

Speaking about the project, Mr. Torsten Paas, Divisional Manager Liebherr USA commented: “We have worked closely with our customers in GCT New York to develop a tailor-made solution that will meet their growth needs over the coming years. In line with the well-known life expectancy of Liebherr cranes, GCT can expect many more years of quality service from their existing machines. The project serves as a clear example of the real-world benefits of Liebherr-Transform. GCT will benefit from extended operational ability of their cranes at a fraction of the cost of replacing their cranes.”

Liebherr-Transform is the upgrade and modification service from Liebherr. Ports and terminals are under relentless pressure to reduce costs and boost performance through increased productivity, faster turnarounds, and reduction in equipment downtime. Unleash the full potential of your container cranes with a manageable financial investment. Liebherr-Transform uses the best available technologies to make your crane stronger, faster, smarter, greener and ultimately...better! 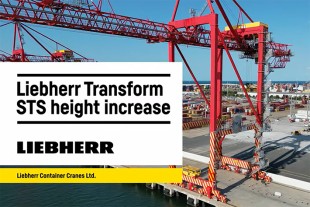