A visit to the HMC Gears plant in Indiana kicked off an extensive project which resulted in the creation of a unique solution for exceptional demands: With the LC 4000, Liebherr forges new paths in large-scale gear cutting production and unites diverse machining methods in one highly efficient machine for the American gear specialist.

The HMC Gears plant is located south of the small town of Princeton, Indiana surrounded by fields and broad plains. For around 100 years the company has been a well-known specialist for gears and gearboxes for various industries. They are one of the few manufacturers in the world to produce gears with a dia meter of up to eight meters. HMC is proud of its many years of expertise, fast delivery times, and excellent service. Always placing the highest quality demands on both itself and its suppliers.

As a supplier for the coal and steel industry the company also specializes in spare parts for large equipment for deep and open-cast mining. Every day counts: If the giant machines are idle, the operator of the mine or conveyor system incurs losses which can quickly go into six figures, but a planned part exchange is not always easy either, since the machines and equipment often run for decades. This means that the design drawings may be old or no longer available. Almost every part is therefore critical. It is a matter of custom-made devices and very small batch sizes, often in massive dimensions and with highly demanding geometries. 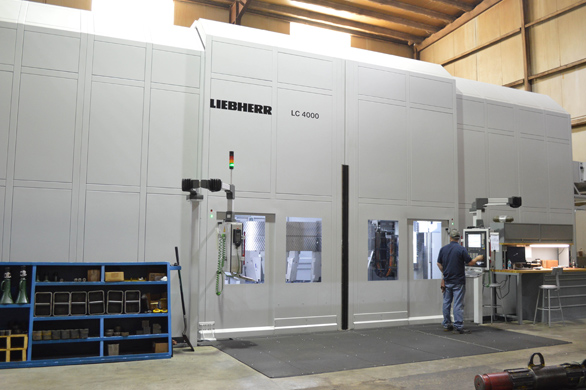 A case for Liebherr

Gears with herringbone or double helical gears are often used in mines and conveyor systems. These particularly quiet-running gears are used when large forces have to be transferred. The special arrangement of the gear prevents the occurrence of axial forces, which minimizes bearing wear. However, herringbone gears are complicated and expensive to produce. HMC needed to acquire an efficient machine with the latest technology. This machine would need to replace several planing machines and be able to manufacture spur, helical, double helical, or herringbone gears, handling diameters between two and a half to four meters. This was an investment decision which would require great trust in the supplier and its expertise.

A case for Liebherr: Although they did not have such a machine in their portfolio, Liebherr was happy to design and manufacture a prototype for this specific customer requirement. Liebherr was familiar with the desired specifications but had not yet united them all together in one machine of this size. Until now: The LC 4000 can machine gears with a diameter of up to four and a half meters and a weight of up to 36 tons.

We have been extremely satisfied with Liebherr’s service, their quick response times and the technical support they have provided.

A project driven by team spirit and the will to succeed

Robert “Bob” Smith III, HMC’s CEO, explains how HMC came to take on this complex project together with Liebherr: “We were looking for a gear cutting center where we could carry out every stage of production, from rough-cutting to internal machining. During a visit to our plant, Liebherr demonstrated their profound expertise and attention to detail and, ultimately, they were the only supplier prepared to take on this challenge.”

This was the prelude to a long and constructive development phase, during which the specific requirements were defined. “HMC is a demanding customer in the best sense. It has high quality standards and expects a first-class product. In this sense, our two company philosophies fit together perfectly. This was reflected in the very fair negotiations and the consistently positive and constructive discussions.” says Dr. Oliver Winkel, Head of Technology Application at Liebherr, describing the cooperation between the two companies. Robert J. Smith confirms: “We have been extremely satisfied with Liebherr’s service, their quick response times and the technical support they have provided.”

In December 2015, following intensive preliminary discussions, a detailed kick-off took place in Princeton, resulting in a specifications sheet containing over 100 points. A great deal had to be constructed from scratch. Examples of this would be an over four-meter long finger milling head for external gears, a second main column, and not least a special machining unit for internal finger milling. The project was characterized by great transparency and open discussions. Liebherr provided HMC with all the provisional results in the form of drawings, photos, videos, and measurement results. Setbacks were also communicated: “Both parties wanted success and at Liebherr everyone really pulled together.” recalls Peter Wiedemann, Managing Director of Liebherr-Verzahntechnik GmbH. The pre-acceptance of the machine finally took place in October 2017 in Kempten. During the spring of 2018 it was shipped and put into operation on site. The install was handled by a team of service technicians from Kempten (Germany) and the USA. 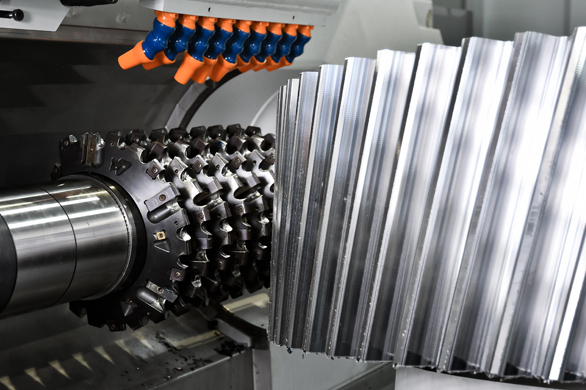 The machine offers great flexibility within its components. It contains an innovative direct drive hob head and an additional finger milling head. The additional head machines external and internal gears from its own main column opposite the hobbing head. This enables machining with gear hobbing, form and 4-axis milling methods on a single machine. Creating the optimal setup for the manufacture of herringbone and double helical gears. The technology was specially customized to the requirements and dimensions of this application. The head has a very long Y axis in order to minimize the thermal influences on the machining results and therefore optimizing the component quality. Another advantage is offered by targeted chamfering with a ball nose end mill. The process design software, Euklid GearCAM, contains data management for workpieces, tools for 4-axis milling, and can simulate the process. It calculates the required hobbing paths, feed strategies, and the tool changes.

An integrated tool changing system with up to 60 storage locations enables the different gear cutting tools to be automatically changed. A scanning probe for gear inspection is also integrated. The machine is capable of achieving accuracies of 12 to 15 according to the quality standard of the American Gear Manufacturers Association (AGMA), which corresponds to the German DIN standard of 3-6. And which module sizes can be produced by this machine? “There is no upper limit. In principle, it could easily achieve module 100!” says Dr. Oliver Winkel.

The decisive factor for HMC was the efficiency of the machine in the production of herringbone, double helical gears and in that of conventional helical gears. On the LC 4000 a double helical gear with a diameter of four meters can be manufactured within one to two days. The manufacturing duration using traditional planing machines is more like one to two weeks – which means a three- to fivefold productivity increase! A traditional helical gear can be manufactured on the machine just as efficiently. In this case taking only approx. four hours of machining time for a workpiece diameter of four meters.

By also adding an additional internal milling head to the second tool stand, Liebherr has added a massive value for HMC. This head is able to machine internal keyways or splines. The giant gear, which weighs several tons, does not have to be re-clamped to finish the bore. “Sometimes it’s the little things that make the difference to a purchase,” says Peter Wiedemann with a grin. The investment and long planning time were worth it for HMC: “We have been manufacturing gears since 1921. For us, the acquisition of the LC 4000 signifies a quantum leap with regard to our efficiency and delivery times for large gearboxes, as well as the security of having a powerful machine for future requirements,” says Robert J. Smith about the machine’s added value. 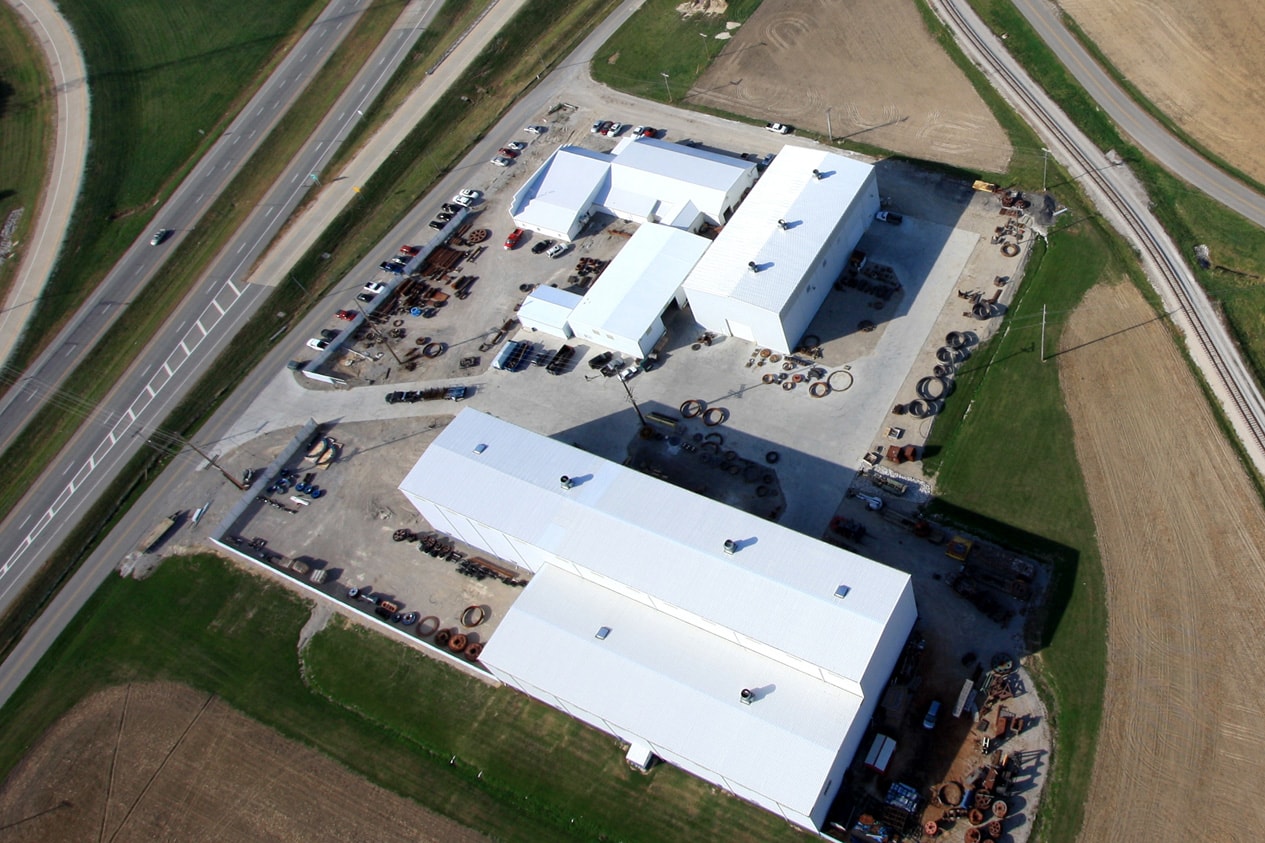 Here you can find an overview of our products and services.