26.11.2014 Common Rail Systems from Liebherr for Engines with up to Five Liters of Displacement per Cylinder

Liebherr presents its Common Rail system platform 11.5 for the first time to the Asian market at the trade fair Bauma China 2014 in Shanghai from 25 to 28 November. The new platform is suitable for engines with up to five liters of displacement per cylinder. Start of series production will be in 2016. The system complements Liebherr’s Common Rail platform 11.2, which is suitable for engines with up to two liters of displacement per cylinder. Outstanding features are the injector without permanent leakage, the oil-lubricated high pressure pump with a maximum output of 900 liters per hour and the Liebherr engine control unit that is suitable for the toughest of environmental conditions. 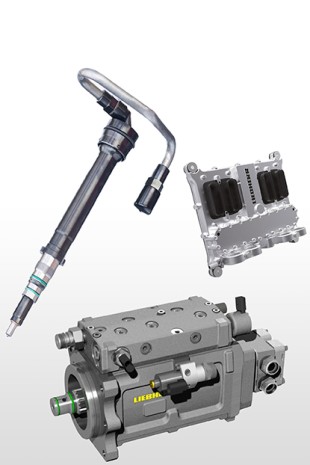 Liebherr fuel injection technology has been used successfully since the beginning of 2012 in Liebherr engines built to comply with the stage IIIB / Tier 4i emissions standards. Since the beginning of 2014, platform 11.2 has also been used in engines complying with stage IV / Tier 4f emissions standards. Platform 11.2 is suitable for engines with up to two liters of displacement per cylinder and covers a performance range of 120 to about 800kW. The system is employed in 4-, 6-, 8- and 12-cylinder engines. Liebherr not only uses the injection system for its own applications but also offers it to other engine manufacturers. The system can be used in on-road and off-road road applications both for medium and heavy duty use.

Now Liebherr has developed a Common Rail system platform for engines with a displacement of up to five liters and an output of up to 220kW per cylinder in addition to platform 11.2, specifically targeted at customers outside the Liebherr group. Series production is planned for 2016.

The injectors deliver a maximum full load injection volume of 1,000mg with reliable multiple injections. The nozzles can be adapted to the required engine performance from a broad nozzle cup flow range that ranges from 1,600 to 4,000ml per 30 seconds. The powerful high pressure pump delivers up to 900 liters per hour depending on the application at a pressure of 2,200 bar. The Common Rail system platform 11.5 can be operated with an engine control unit from Liebherr that combines all control functions including exhaust gas aftertreatment. Liebherr control units fulfill the requirements of ISO 15998, ISO 13849 and ISO 61508 SIL2 certifications.

Liebherr develops and produces all key elements of fuel injection systems in its plants in Switzerland and Germany. The company, however, is a comprehensive system provider, offering engine architecture, control units and injection systems from one source with a high level of system integration, and also co-operates worldwide with various manufacturers who only require individual components.

The main feature of the Liebherr injector is that it has no permanent leakage. This reduces the fuel backflow to the tank and the thermal energy associated with it considerably. Consequently, the need for or size of an additional cooling system is minimal. The remaining operating leakage is less than 40 ml/min at full load. The 3-way control valve enables adaptation of the needle opening speed to each individual engine and, at the same time, realizes an extremely fast closing process of the injector needle. This makes it possible to achieve a good balance in the configuration between combustion to the fullest extent and the lowest possible consumption.

To avoid flow losses, the injector does not have a throttle point between the high pressure connection and the injector needle seat. With an additional, relatively large fuel reservoir volume (mini-rail) in the injector, the pressure loss is minimized from the inlet to the injector seat during injection. Through the combination of these constructive measures, it was possible to reduce the mean drive performance requirement of the high pressure pump considerably.

By lubricating it with oil instead of fuel, the service life of the high pressure pump does not depend on the fuel quality used. Thanks to the optimal lubrication, the mounting is very sturdy and allows relatively high system pressures to be achieved even at low speeds. The feed pump has been carried out in a G rotor (inner rotor) design. It is distinguished by high suction, particularly in the start-up phase. The main delivery pump with eccentric drive contributes towards the excellent smooth running.

The engine control unit can be equipped as an option with fuel cooling. As an all-in-one solution, it comprises all control functions for both the engine and exhaust gas aftertreatment system.