Today the Liebherr Group is publishing key data from its annual report for the 2013 business year. Against a backdrop of moderate international economic progress, Liebherr achieved a turnover of 8,963.6 million € in 2013. 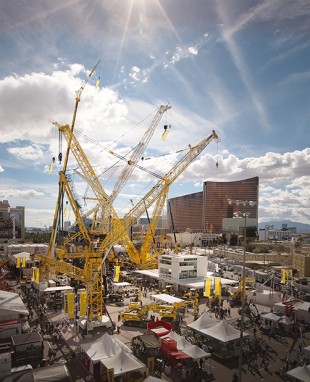 Turnover according to product groups

In the 2013 business year the maritime cranes division achieved a turnover of 830.1 million €, a small but positive increase of 2.4 million € or 0.3 % compared with 2012. The aerospace and transportation systems division continued the previous year’s positive development with an 87.5 million € (8.5 %) increase in turnover to a total for the year of 1,120.1 million €. Turnover from the machine tools and automation systems division remained at the previous year’s satisfying level. Following the very significant increase in 2012, turnover in the review year was 266.4 million €, an increase of 3.7 million € or 1.4 %. Turnover from the domestic appliances was 909.4 million €, an increase of 19.5 million € or 2.2 %. The largest markets for Liebherr refrigerators and freezers were Germany, Russia, France and Austria. 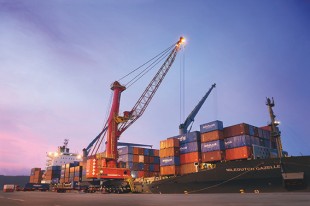 After altogether positive results in the previous year, turnover in 2013 developed very differently from one sales region to another. The Liebherr Group’s ten largest sales markets were Germany, the USA, Australia, Russia, France, Great Britain, Canada, the Netherlands, Brazil and South Africa.

In Western Europe the Group was able to increase its turnover by 191.2 million € or 4.8 % to 4,157.5 million €. In Germany, its largest market of all, the increase in turnover was above average.

In the Near and Middle East, Liebherr’s turnover was 306.5 million €, equivalent to a drop of 1.4 million € or 0.5 % when compared with the previous year. Significant increases were recorded in Saudi Arabia and the United Arab Emirates.

In America the Liebherr Group was unable to maintain the previous year’s positive business pattern. At 1,470.3 million €, turnover was down slightly by 28.8 million € or 1.9 %. There was a drop in sales revenues in the USA.

On the African continent, the Group’s turnover after a year of satisfactory business activity totalled 606.0 million €, an increase of 14.2 million € or 2.4 %.

A surplus for the year of 364.1 million € (previous year: 552.0 million €) is shown in the 2013 consolidated accounts of Liebherr-International AG in Bulle, Switzerland. This figure represents a reduction of 187.9 million € or 34.0 % compared with the previous business year. Exchange-rate fluctuations, especially in threshold countries, were one of the significant causes of this downturn.

During 2013 the Liebherr Group’s workforce increased in size by 1,623 employees or approximately 4 %. At the end of the year 39,424 people were employed at Liebherr Group companies.

At the German companies the total workforce went up to 16,265 employees. The total for Austria, very little changed from the previous year, was 4,810. The workforce at Liebherr Group companies in France increased to 3,408 at the end of 2013. In Switzerland, 193 employees were taken on by the Group, resulting in a total workforce of 1,469 at the end of the review year. The total number of employees in other European countries rose by 441 to 5,514.

Outside Europe, the workforce increased in size to 7,958 employees. On the American continent, the workforce decreased to 3,383 at the end of 2013. In Asia and Australia, 134 new jobs were created, so that Group companies there employed 3,687 people at the end of the review year. Liebherr Group companies on the African continent employed a total of 888 people on December 31, 2013.

In the 2013 business year, the Liebherr Group’s investments reached a total of 830.0 million €, and thus matched the previous year’s level. 552.5 million € were invested during the year in the construction machinery and mining area, approximately half being devoted to the earthmoving division. Construction work began in the summer of 2013 on a new logistic centre near Kirchdorf an der Iller, Germany. Among the investment projects undertaken by Liebherr-Hydraulikbagger GmbH in Kirchdorf was an initial and follow-up training centre.

Last year the mining division invested 106.2 million €. In addition to extensions in Colmar, France, and Newport News, VA / USA, the division undertook similar enlargements to its facilities at various locations in Australia, including Adelaide and Perth. 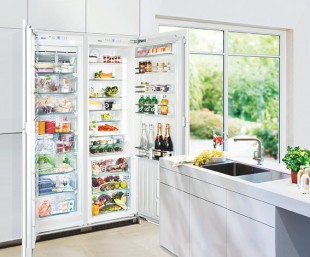 The mobile crane division invested 83.6 million €. In Ehingen (Donau), Germany, Liebherr’s investments included a new assembly building for experimental work, undercarriage acceptance testing and the assembly of large sunshades. The tower crane division invested 73.2 million € in the past year. In Biberach an der Riss, Germany, construction of a new training centre was completed in the autumn of 2013, and a new surface technology building also erected. Investments by the concrete technology division amounted to 13.1 million €. In Bad Schussenried, Germany, an investment was made in application technology for the painting of concrete mixing plant.

Outside the construction machinery and mining areas, the Liebherr Group invested 277.5 million €, of which 71.1 million € went to the maritime cranes division. At Liebherr-Werk Nenzing GmbH in Austria, investment included a new building for repair work.

In the aerospace and transportation systems division, total investment was 76.4 million €. Work continued on the large-scale extension to the production facilities in Lindenberg, Germany. The first phase, comprising the construction of two assembly buildings and a logistics building, was largely completed in 2013.

The machine tools and automation systems division invested 7.1 million € in the 2013 business year, including for example extended production facilities and a new office building with classrooms for trainees in Bangalore, India.

The domestic appliances division invested a total of 37.2 million € in 2013. In Ochsenhausen, Germany, for example, plant and machinery for sheet metal processing were purchased. In Radinovo, Bulgaria, the production facilities were enlarged and modified.

The Group devoted 85.7 million € in all to investments on other products and services. During the review year, investments by the components division included an extension to Liebherr Machines Bulle SA in Bulle, Switzerland. Liebherr-Components Biberach GmbH began construction work on a branch factory near the existing location.

The 2013 annual report can be called up here