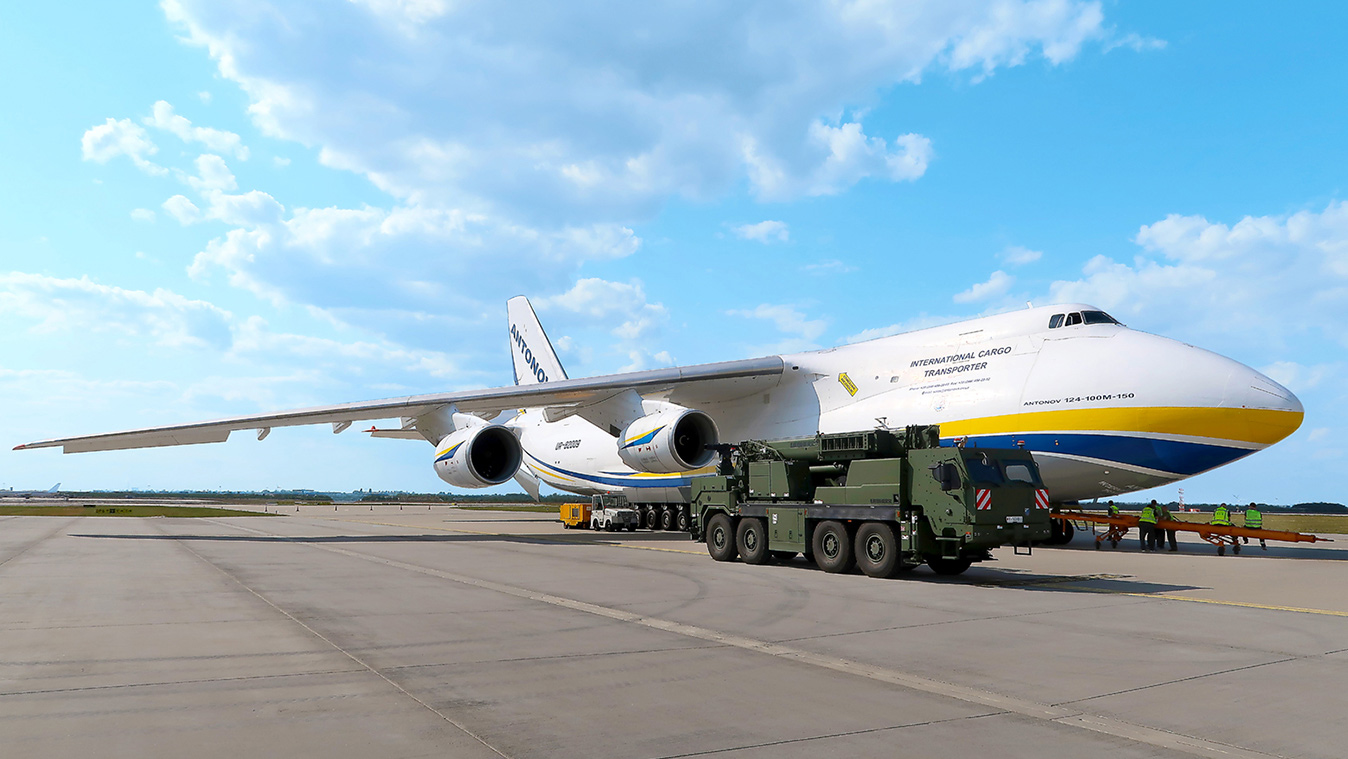 On 27 June 2017, we received an order from the Federal Office of Bundeswehr Equipment, Information Technology and In-Service Support (BAAINBw) to deliver a total of 71 armoured mobile and recovery cranes worth around 150 million euros. 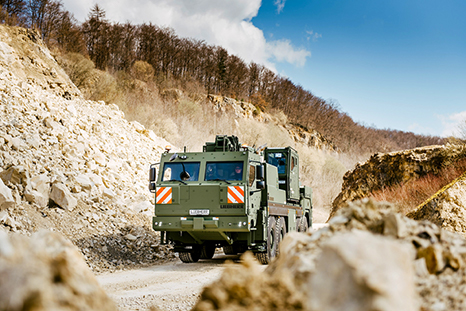 The order comprises the delivery of 33 armoured recovery cranes with the model name G-BKF and 38 G-LTM mobile cranes, which feature armoured drivers’ cabs and crane cabs. We delivered the first of these machines in February. The deliveries are scheduled to be completed by the end of 2021.

The focus when the order was placed was on the protection of personnel in the cranes. We are working with Rheinmetall, the leading European supplier of military equipment, on the armoured driver's cabs and armoured crane cabs to ensure that the high requirements for them can be met in full. The drivers’ cabs protect the crew from ballistic and mine threats and also feature an NBC ventilation system. The superstructure cabs protect the crane operators from ballistic threats during crane operations. The two cabs are identical for the G-LTM and G-BKF vehicles. 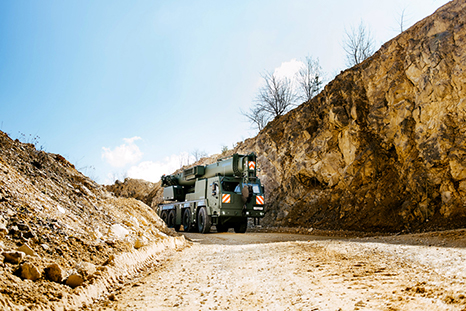 The G-BKF from Liebherr is an armoured recovery crane on a standard four-axle mobile crane chassis. Its two recovery winches and a towing hitch at the rear enable it to rescue and tow a wide range of different vehicles such as the new generation of armoured control and command vehicles (GFF), armoured transport vehicles (GTF), MULTI FSA (swap body vehicles) and wheeled vehicles which are already in use. The G-BKF can be used flexibly and economically since it is equipped both to recover vehicles and to hoist loads. Its 20.9 metre telescopic boom enables the G-BKF to handle loads of up to 20 tonnes quickly and precisely. 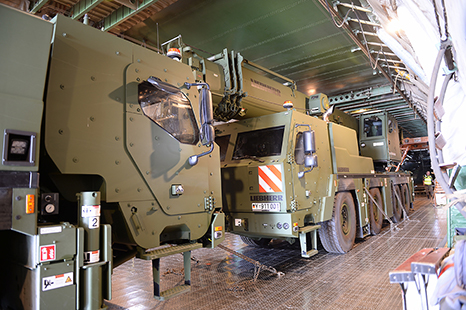 The first are already attached – each crane is secured in the Antonov by 36 chains.

The G-LTM ordered by the Bundeswehr is a standard four-axle mobile crane. Its all-terrain chassis features the latest chassis and drive technology, which ensures excellent handling, even on difficult terrain. It has a 35.7 metre telescopic boom and a recovery winch at the rear. The order from the Bundeswehr comprises 17 G-LTM cranes with 8.4 tonnes of counterweights known as "heavy duty mobile cranes" and 21 units of the same model with 22.5 tonnes of counterweights with the designation "very heavy duty mobile cranes". 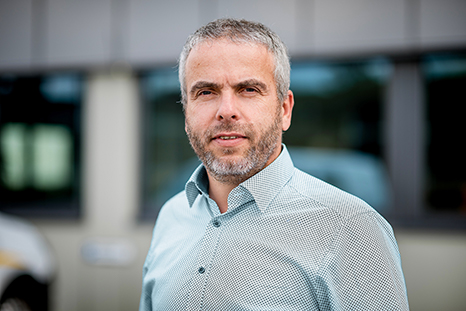 Even before the order was placed for the 71 cranes, the Bundeswehr tested a prototype of the G-BKF over period of many months. We developed it on behalf of the Bundeswehr based on its specifications. The tests have continued even after the delivery of the first serial machines. As part of the tactical deployment tests, August saw the transportation capacity of the Liebherr military cranes tested in an Antonov AN-124. The Antonov AN-124 is one of the largest freight aircrafts in the world.

These tests were monitored by Armin Bucher from the Crane Carrier Design Department and Arno Bücheler from the Testing Department. “The entire loading concept for air transport was checked during the tests. These tests included checking the dimensions, driving onto the access ramp and securing the chains to the lashing points”, explains Armin Bucher. “Each crane is secured in the Antonov by 36 chains.

The Bundeswehr tests the various capabilities very intensively and exhaustively. Each test takes the vehicles into their limit ranges.

The number of lashing points was significantly increased compared to those on our standard cranes. Acceleration forces of up to 2.3 g (g = 9.81 m / s²) were used during the design phase. Arno Bücheler was also impressed by the scope and intensity of testing by the German Army: “I monitored the prototype tests on the G-BKF – and now the tactical deployment tests as well. Since the cranes will be used in harsh conditions, this type of testing is absolutely essential.” The Bundeswehr and Liebherr have been working very closely together during the tests. “The project is extremely important to the Bundeswehr. We have weekly telephone conferences with the BAAINBw”, says Armin Bucher. “This enables us to assess complaints and requests for modifications as quickly as possible and take any required action. The Bundeswehr is very satisfied with the machines and with the straightforward collaboration with Liebherr.” 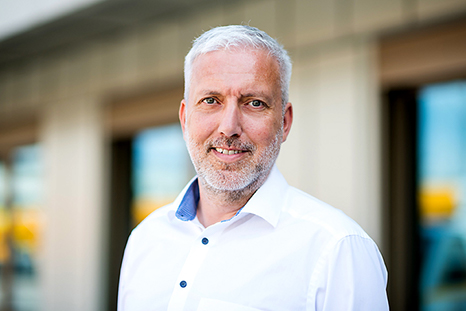 As part of the tests, the vehicles were loaded using a ramp at the front of the aircraft. Containers for crane accessories and counterweights are hoisted into the Antonov by the aircraft’s own crane system at the rear. The results were extremely positive – the transport aircraft must be loaded with a total of over 100 tonnes to transport the G-LTM. In addition to the crane weighing 48 tonnes, a MAN Multi with a ballast flat (20-foot swap body) and other accessories were loaded. The G-BKF recovery crane is a little lighter – in addition to the vehicle weight of 44 tonnes, there is another 1.6 tonnes for a 10-foot flat.

The tests were conducted at the Leipzig/Halle Airport site. Two Antonov AN-124 aircraft operated by Ukrainian airline Antonov Airlines are permanently stationed at this major freight hub and are also available to NATO and the EU as part of the SALIS (Strategic Airlift Interim Solution) programme.

Each crane is secured in the Antonov by 36 chains. Acceleration forces of up to 2.3 g were required in the design.

The transport orders are coordinated by the Bundeswehr’s logistics centre in Wilhelmshaven, which also provided the aircraft for the tests.

A total of 56 AN-124 aircraft were built between 1984 and 2004, 28 of which are still operating. The giant transport aircraft is now mainly used for charter freight flights and now holds a monopoly position within this segment. The aircraft weighs 173 tonnes and can transport 120 tonnes in the civilian version or up to 150 tonnes in the military version. It is 69.1 metres long, 20.8 metres high and has a wingspan of 73.3 metres. It lifts off the ground with a gross weight of up to 400 tonnes and cruises at a speed of over 800 km/h.