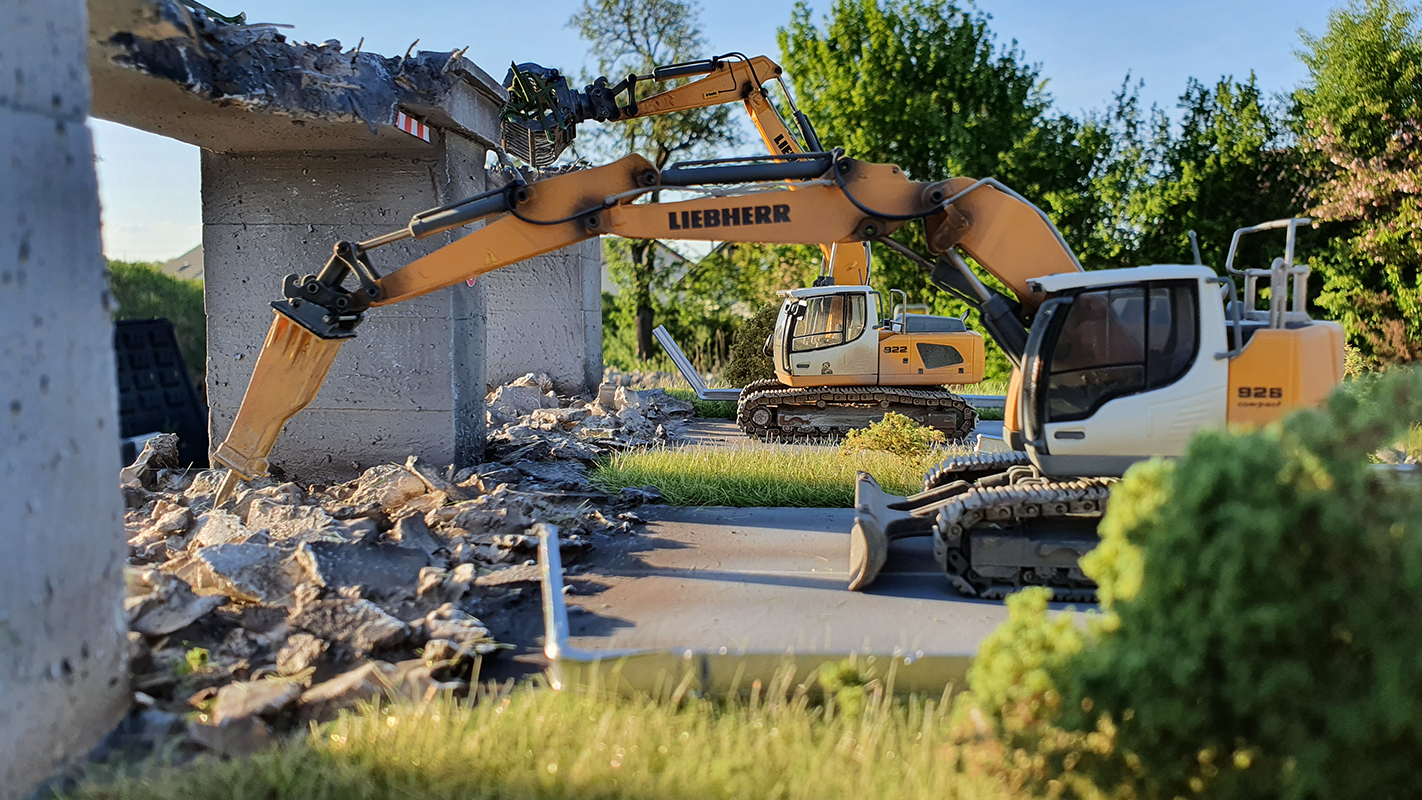 Construction (hi)stories: It's a small world

The magic is indeed in the details – but Theodor Fontane always knew that. You can find out just how right he was in the third instalment of our Construction (hi)stories series – and it’s a special one this time around, because we’ll be turning our attention to a slightly different type of creation.

It all started in 2008 with a model of a Liebherr 924 Compact. Hailing from Rangendingen in the state of Baden Württemberg (Germany), Markus Thalmüller was in the process of training to become a bricklayer when he got his hands on a replica of the crawler excavator. But this gem was destined for greater things than living out its days in a display case: “I felt the model deserved better than to be left gathering dust in a cabinet”, Thalmüller recalls. After looking for a way to truly pay homage to the crawler excavator, he eventually decided to build a diorama. Any number of scenes can be created with different types of diorama, which is why they’re such a common sight in technology and natural history museums. Dioramas are also hugely popular in the world of model railways, which is where Markus Thalmüller found the inspiration that fuels his passion.

The R 960 Demolition is in its element against a gloomy backdrop. Wild vines are making their way up the sombre building, half of which has already been demolished by the crawler excavator. The basis for the dilapidated building is a construction kit drafted in CAD, offering various possibilities for future designs. A CO2 laser cuts out the parts roughly, and then it’s time to proceed sensitively: the construction kit is refined according to individual preference and glued. According to Markus Thalmüller, the laser-engraved and detailed brick façade is what makes this diorama extraordinary. He has even included some bricks into the rubble towering in front of the R 960 model. If you look closely, you can discover many more details: a rain gutter made from wood with chipped off paint in some places, broken windowpanes which Thalmüller made from a thick transparent film, as well as a 3D-printed hydrant. Reinforcing steel made of thin metal wires bores out of the building façade’s skeleton, making the diorama appear particularly realistic. It took Thalmüller around 10 hours to finish this scenario, whose foundation is made from a hard foam board and plaster. Many different colours, applied by airbrush, make for a realistic appearance and a real demolition atmosphere. 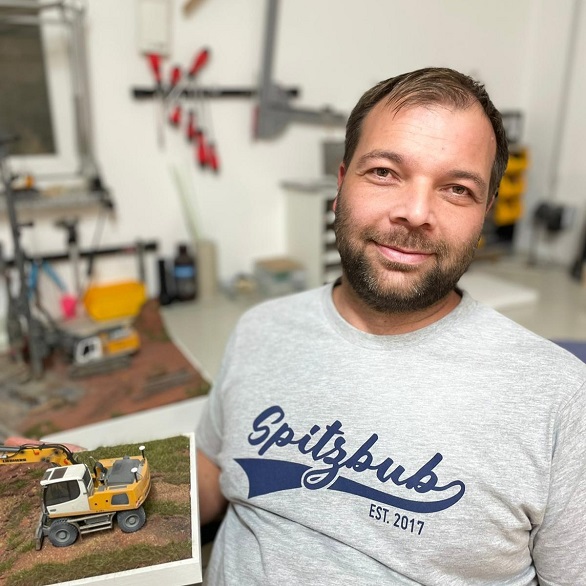 Compared to his more recent creations, his first diorama was rather simple. “Model-making materials are expensive, and you need a whole lot of them”, explains the devoted craftsman. Thalmüller’s recent dioramas look much more professional than his very first model, where the grass is roughly scattered over the adhesive-covered surface. To make the grassy areas of his dioramas as realistic as possible, Thalmüller uses a special device which electrostatically charges the grass blades through a condenser and emits them vertically, creating a very convincing 3D effect. Additional depth and realism can be given to the grassy areas by painting them beforehand and combining different fibres. “To achieve a realistic look, you have to play around with grass fibres with different colours and lengths ranging from 0.2 to 1.6 cm. Depending on what you’re trying to replicate, you can also use materials such as sand and grit for the ground areas, some of which will need to be made smaller to match the scale.” But a strong foundation is needed before the stages of designing the ground area and applying the final touches can begin. No matter how intricate you want the diorama to be, you always have a wide range of materials and methods at your disposal for this vital initial step. Foundations can be made of materials such as Styrofoam, light foam, processed wood, a multiplex board or, for very small dioramas, cardboard.

In the first example, the substructure is made of Styrodur boards of varying strengths, which have been coated and filled with plaster to create a stable foundation. Small pieces of metal that keep the soil in place are painted to blend into their surroundings and protect the foundation. Bodies of water can be made using simple materials such as plastic film cut down to the appropriate size. More professional dioramas, such as this one, use various fluids consisting of one or two components. These are poured into a sea, lake or river bed and left to harden. A layer of tiny stones with different grain sizes covers the soil, which is enclosed with a matchstick fence. The diorama is rounded off with many more tiny details and objects, allowing the LB 28 drilling rig to fit seamlessly into the scene, where it carries out its job by the water. 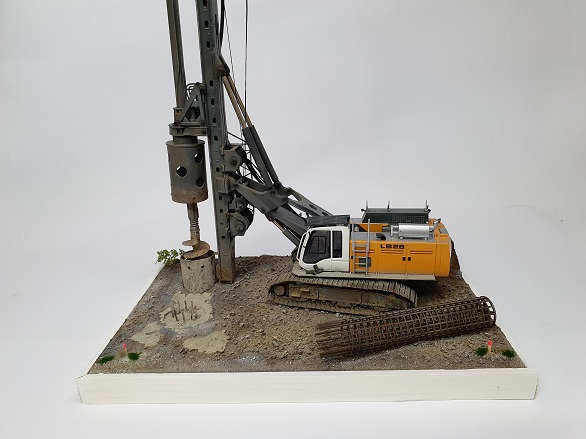 Nowadays, Markus Thalmüller is a pro, because he’s been making his intricate, imaginative dioramas for over a decade – and it pays to have an eye for detail. The elaborate scenes, skilful changes of scale and photographs of real landscapes create a seamless transition and an illusion so convincing that it tricks the eye of the observer, even at second glance. After some 13 years, diorama-building is now more than a hobby for Thalmüller. He’s now turned it into a business, creating dioramas to order for customers from Germany and abroad in his 40-m2 workshop. “I make the most out of the space I have, because aside from my materials and tools, I often store customers’ dioramas there”, the modeller reveals with a chuckle. “Customers often give me photos or sketches as the basis for their diorama. Then we need to decide on the size and, of course, the scene, for example canal construction.” Thalmüller specialises in 1:50 scale, but he’s made exceptions for some customers with dioramas at 1:32 and 1:87 scale.

In this example, Markus Thalmüller used a polystyrene board as the ground upon which the 3D-printed rails are laid to carry the A 922 Rail Litronic. The rest of the substructure is made of modelled plaster, providing a basis for the landscape, which is given a realistic appearance by the bushes, grass, soil and demolition materials, as well as the railroad excavator’s various attachment tools. The materials and models are coloured using spray paint, and then it’s time for the precision work: a paintbrush and an airbrush can be used to give surfaces an aged appearance. Even this world is not safe from the effects of time, as the rails are coated with a layer of rust.

One of his models even made a special appearance at Bauma, after a Dutch company commissioned the diorama and ended up displaying it at its stand at the trade fair. But that’s not all – the world’s leading trade fair for industrial machinery also has a tiny equivalent, which is devoted entirely to miniature versions of the machines. The Mini-Bauma model exhibition is held annually at Technik Museum Sinsheim and enjoys huge popularity in the diorama world. It is a wonderful opportunity for Markus to display his works: “Since the 25th anniversary event couldn’t go ahead in 2020, I’m obviously really hoping that we can celebrate it belatedly in 2022.” Until that day comes, Thalmüller has time to create a whole host of dioramas – he makes one per week on average. However, the time needed depends on the size of the diorama and the complexity of the scene: “I can finish a small diorama in about 3 or 4 hours, but a demolition scene can take up to 15 hours.” Thalmüller invests a lot of time in his dioramas and continually strives to perfect his technique: “There are always new tricks emerging that allow you to better attach certain materials.”

From miniature model to superlative

Markus Thalmüller’s passion for Liebherr machines is still going strong. In fact, he lives it at 1:1 scale in his day job: For the past few years, he’s been working for a road-construction company where he operates an A 918 compact wheeled excavator. His collection of model Liebherr machines has also grown significantly over the years, currently comprising 30 replicas, including wheel loaders and crawler excavators. And whenever he removes a model from its display case, he’s able to create a perfect illusion of the machine at work in its own little world.

In this somewhat different Christmas story, Liebherr machines make dreams come true in the domestic kitchen. With their usual speed, precision and agility, they mix the ingredients, knead the dough and cut out the biscuits.

Are you still looking for a Christmas present? In our Liebherr shop you will find numerous models as well as Christmas cookie cutters and many further products.

Construction changes our world. It creates new architectural masterpieces and shapes the skylines of our cities. This time, we explore famous landmarks built in the US with the help of Liebherr machines.