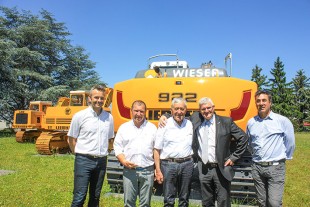 The company Karl Wieser OHG, based in South Tyrol, Italy, which is specialized in earthmoving work and civil engineering has recently acquired a new R 922. Now they own hundred Liebherr crawler excavators.

In early summer 2016, the founder Karl Wieser and his son Franz Wieser, picked up the new machine at the manufacturer’s premises in Colmar, France. On this occasion, they visited Liebherr-France’s entire factory site, where the company has been producing crawler excavators with operating weights from 18 tons to 100 tons since 1961.

Karl Wieser OHG has always put confidence in Liebherr machines since it was founded in 1964. The high processing quality of the frequently customized machines and the well-established relationship of trust are the cornerstones of the longstanding cooperation with Liebherr.