As part of a major railway construction project in the North of England, the Scottish contractor Weldex uses two Liebherr crawler cranes to complete a central construction phase. In February both crawler cranes performed a tandem hoist for a 560-tonne arched bridge over the River Irwell in Manchester. The new railway bridge will link the city's Piccadilly and Victoria stations. 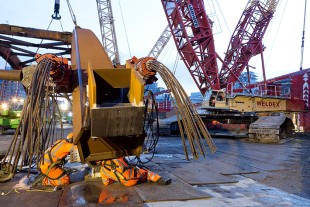 The final preparations: The curvature of the steel arch can be adjusted easily using these hydraulic cable tensioning devices. The LR 1750 is waiting on the right.

The LR 1750 started work at the site in Manchester in July 2016. The 750-tonne crane was used for six months to set up the lower section of the bridge immediately over the river and to assemble the 90-meter bridge arch. The massive steel structure had previously been transported to the site in the centre of the city in small segments.

Weldex sent its most powerful crawler crane to the site for the subsequent installation of the bridge arch using a tandem hoist. The assemblers erected the Liebherr LR 11350 with a 72-metre main boom and the 42-metre derrick boom over a period of four days for the job. The large crane would have to handle the majority of the weight and position one end of the bridge arch on the opposite bank of the River Irwell. 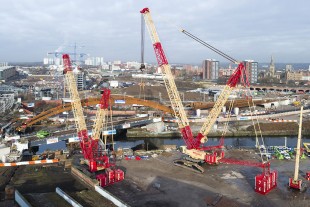 Bird's eye view – the derrick ballast on the LR 11350 is 30 metres from the turntable in this configuration.

This hoist constituted a massive load case for the LR 11350 as a result of the required radius of 51 metres. The 357-tonne gross load could only be managed at this distance because the extended guide frame on this crane model makes it possible to extend the radius of the derrick ballast pallet from 25 to 30 metres. This configuration of the crane, known as SLDB2, enables it to handle an additional load case of almost 50 tonnes with a radius of around 50 metres.

However, before the enormous bridge arch could be hoisted over the river, the crawler cranes had to move it around 30 metres in stages up to the bank. The synchronous transport was interrupted several times because the cranes had to be fitted with additional ballast. An LTR 1100 telescopic crawler crane stacked the derrick ballast of the LR 11350 up to the maximum of 600 tonnes. Together with the central and turntable ballast, ultimately there were 830 tonnes of counterweights on the crane. The actual hoist over the water then took place slowly and with no complications with a great deal of care and precision. The bridge arch was in position not even three hours after the load had been picked up. 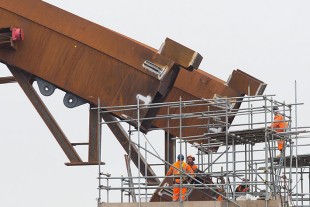 Massive – The structural steel workers in the picture demonstrate the dimensions of the bridge arch which measures 90 metres in length and weighs in at 560 tonnes and is almost in position in this photograph.

"I love the crawler cranes from Liebherr"

Jarrod Hulme, Project Manager for this bridge installation in Manchester was both highly satisfied and relieved after the successful tandem hoist. He applauded the Weldex team led by Mark Hollett, who was responsible for the crane work. "Fantastic lads", said Hulme. He has often worked with the crane specialists from Scotland in the past. "Weldex has never disappointed us in around 20 years of working with them."

But he was also full of praise for the crane equipment used in Manchester. Working as Project Manager at Severfield, Great Britain's largest structural steel contractor, Jarrod Hulme has a great deal of experience with crane work for large projects. He also erected the enormous pylons in London for the cable car over the Thames with the Liebherr LR 11350 from Weldex. "We use these crawler cranes very often", said Hulme. "I love the crawler cranes from Liebherr. It's good stuff."