Crane contractor Schuch is modernising its fleet and replacing three old mobile cranes with four new Liebherr mobile cranes, an LTC 1050-3.1, an LTM 1050-3.1 and two LTM 1070-4.2. Schuch is particularly keen to take advantage of Liebherr's innovative mobile crane technology such as VarioBase® and ECOmode. But green credentials were also an important criterion in the purchase decision: reduced exhaust emissions from the latest generation of engines. 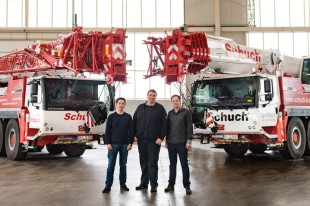 Family-run Krandienst Schuch is now managed by the third generation. So the two brothers, Tim and Christopher Schuch, were not going to pass up the opportunity to come to the Liebherr production plant in Ehingen with their father to take delivery of the new cranes. Christopher Schuch explains: "Our aim is to be able to provide our customers with a modern fleet. That is why we invested in the new cranes". Tim Schuch continues: "We are delighted with Liebherr's new technology. VarioBase® enables us to work more effectively, for example saving on ballast transport. That enables us to give more consideration to our customers' wishes."

The LTC 1050-3.1 enables Schuch to take on more crane work inside buildings. Tim Schuch explains: "Although we have an alternative machine, the LTC 1050-3.1 is the most powerful compact crane in the 3-axle class. It has convinced us in every respect and it can telescope its boom with a fairly large load. And when space gets very tight, you can even remove the front storage box."

Schuch has ordered the lift cabin and VarioBase® for the LTC 1050-3.1. Both options enhance safety for daily crane operations. Christopher Schuch explains the reasons behind the purchase of the LTM 1050-3.1 and LTM 1070-4.2: "Quite simply they are time-tested machines with modern technology."

Each of the two brothers is now responsible for his own company within the Schuch Group, which now has 10 sites between Saarbrücken in the west, Fulda in the north and Karlsruhe in the south. Christopher is in charge of Krandienst Schuch GmbH which operates in the northern territory including the Rhine-Main conurbation whilst Tim runs Kran und Transport Schuch GmbH from Wörth in the southern territory which extends down to the region around Stuttgart.

Nevertheless, the brothers are in full agreement: "We act together and use our synergies together. You can see that from the new layout of the cranes. The livery and the logo are the same, only the company names on them show which part of the Group they belong to." Overall Schuch operates around 60 mobile cranes with load capacities between 30t and 1,000t.