Half a century of Liebherr-Verzahntechnik GmbH means 50 years of commitment to the machinery and plant engineering industry. Gear technology originated in the technology of the revolving tower crane. Hans Liebherr wanted to buy a gear hobbing machine for gear manufacturing, but could not find what he wanted – so he simply built it himself. It’s a typical Liebherr story, since many sectors in the company group have emerged in this or in a similar way. Taking things into one’s own hands: an attitude that can still be found at Liebherr today.

Pioneering achievements in gear technology include the first shaping machine with a hydrostatic guide in 1967 and the first gear grinding machine with CBN grinding discs in 1989. Both technologies set standards in their industry. Three years later, Liebherr took over the machine factory Lorenz, a renowned manufacturer of gear shaping machines and gear cutting tools located in Ettlingen. Liebherr Verzahntechnik still has a factory for gear cutting tools there today. The product range offered by the traditional company was a perfect fit for the Liebherr-Verzahntechnik product portfolio.

In the late 1990s and 2000s, the trend in gear technology was towards size: The wind turbine boom increased the demand for large toothed gears and therefore for machines to make them. Gears with a diameter of six metres required special technologies, which Liebherr successfully developed.

At the pulse of technological progress

In the last ten years, increased quality and precision of toothed gears finally came more sharply into focus, driven by aviation technology and the desire for increasingly quiet gearboxes. Gear technologies such as ChamferCut were able to score highly here. Gear skiving, a process that had been developed at an earlier date, finally caught on in a modern design and is having a considerable effect on productivity: skiving3 completes the product range of gear manufacturing. 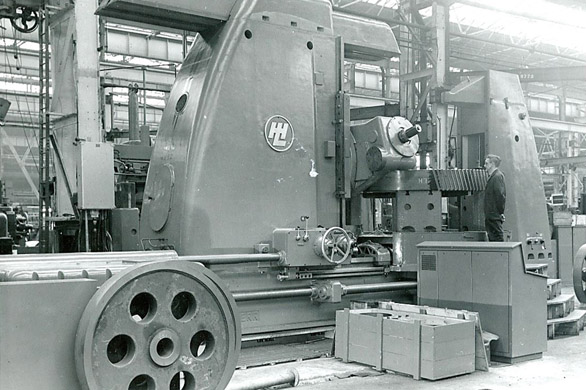 From individual machines to a connected production park

From an early date, Liebherr relied on machine automation, founding a second business segment in this area. The company entered automation and plant engineering back in the late 1970s, by planning a production hall for a customer. At the start of the 1980s, Liebherr planned the “factory of the future”: the first fully automated plant with a high-bay warehouse and automatic machine loading.

Automation developed considerably over the next 20 years, particularly in the area of loading gantries and palletising cells. Finally, in 2007, the first pallet handling system (PHS) was installed; this became a great success story for Liebherr and still impresses with its flexible possibilities.

Liebherr completed its automation range with bin-picking solutions and successfully entered robotics with vision systems. This was the company’s response to the increasing need for flexible production processes. Batch sizes are becoming smaller, with lines processing a larger number of different components. Thus, Liebherr became a full-service provider for automation systems and enjoyed success in many industries in this capacity.

In the last few years, automation and gearing have increasingly converged. Liebherr’s extensive range now enables it to build, for example, gear cutting machines with cage automation, robot loading, integrated additional services such as measuring or de-oiling, which is increasingly in demand. From individual machines to the complete machining line with automated line input and output, Liebherr can offer everything from the same source.

The topics of the future are increased connectivity as well as needs-based and local production with the least possible waste, because resources are limited. We are preparing ourselves for these trends.

Over time, both gear technology and automation continued to face new challenges, for which Liebherr developed suitable solutions. For 50 years, the engineers at Liebherr have provided innovative guidance for many industries and played a part in shaping the future.

Because the future needs origins. “We are constantly developing”, Dr Hans Gronbach observes. “Since momentum and globalisation are continuing to increase, we have to ask ourselves this question: How does a traditional company react to technological change?” adds Michael Messer. For the Managing Directors of Liebherr-Verzahntechnik GmbH, an important issue here is the human factor.

One aspect of this, according to Dr Hans Gronbach, is that “Modern technology increasingly uncouples people from machines. Previously, gears were set; now, everything is done through the digital NC control system. Perhaps our machines will be controlled from the office in future.” Direct feedback from the machine to human interventions is increasingly omitted. The operator cannot observe so directly and has to fill this gap by making inferences – a demanding task.

For Liebherr, this means a different way of interacting with employees. Michael Messer says: “We have to guide our people and train them appropriately. We therefore also see ourselves as bridge-builders for our employees towards globalisation and high technology.”

As Michael Schuster shows, this path already starts during training. “All trainees go abroad. Every industrial mechanic learns English and deals with control technology. This is an investment in the future. Interdisciplinary work is trained from the start, in order to encourage common understanding when working in teams.”

Intact and trust-based customer relationships have top priority for Dr Christian Lang. “We succeed because of our deep understanding of applications. Gear technology is now established, which means that the competition has become tougher. In this setting, trust in the ability to solve problems becomes increasingly important, because customer technological challenges are becoming ever more demanding.”

Quality is therefore the constant factor underlying Liebherr’s self-image. “This applies both to mechanical and digital products”, emphasises Dr Hans Gronbach. “Our daily routine and our development are becoming more and more software-dependent. That’s why we are increasingly building up expertise in this field and deciding where we should be active ourselves and where we should buy services.” 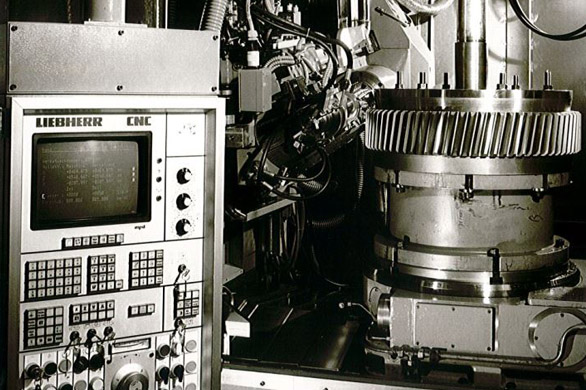 At the same time, digitalisation has become the driver of growing complexity and customer individuality. Michael Messer is convinced: “This trend towards maximum flexibility will continue to occupy us. This applies especially to us as mechanical engineers: both during manufacturing and during the use of our products, both for gear technology and for automation. We will achieve a level of self-governing control loops that can’t even be imagined today.”

All CEOs are observing a massive change due to the new digital possibilities. Dr Hans Gronbach outlines tomorrow’s modern production as follows: “We will see self-organising supply chains that are supplied by autonomous production centres as much as possible. We will plan manufacturing very differently, on the basis of qualified and digitally optimised predictions.”

Our task will be to keep the customer benefit in mind within this setting and to find suitable solutions.

Data represents a critical factor in these future scenarios. Who will have the rights to what data in future? The business models of the future are based on this information, which means that connection with customers and suppliers is critical for success. Dr Christian Lang says: “There will be competition for data, because it is increasingly being used as goods.”

This goes hand in hand with the topic of data security: who will have access to what knowledge? Michael Messer points out that business relationships will become considerably more data-centric in future and that new pay-per-use models will also establish themselves in mechanical engineering. “Our task will be to keep the customer benefit in mind within this setting and to find suitable solutions.”

Despite globalisation and digitalisation, however, Dr Christian Lang also sees a trend back towards local production. “We will experience a reversal. On the one hand, transport will be more expensive, and on the other hand, the modern factory requires fewer people – and those that are needed must be well trained. Thus, much of production will return from low-wage countries. The topics of the future are increased connectivity as well as needs-based and local production with the least possible waste, because resources are limited. We are preparing ourselves for these trends.”

To ensure that Liebherr gear technology and automation systems continue to be future-orientated, innovative and successful for the next 50 years to come.