The crane and transport company Wille & Dulies Krane GmbH has taken delivery of two new 5-axle cranes from Liebherr: an LTM1150-5.3 and an LTM1160-5.2 will replace two 130-tonners at the company based in northern Schleswig-Holstein. The new cranes will strengthen and modernise its fleet in the medium lifting capacity range. 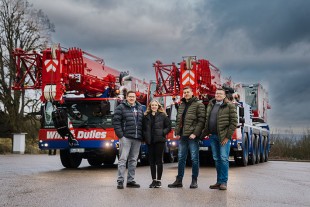 The next generation is waiting in the wings (from left to right): Maik Dulies, Mailin Dulies, Fynn Heldt, Stefan Heldt (all from Wille & Dulies Krane GmbH).

The next generation is waiting in the wings (from left to right): Maik Dulies, Mailin Dulies, Fynn Heldt, Stefan Heldt (all from Wille & Dulies Krane GmbH).

"Taking delivery of two new 5-axle cranes at the same time is something special for us," says Maik Dulies in reference to the acquisition of the two new Liebherr mobile cranes. The managing partner at Wille & Dulies travelled to the Liebherr plant in Ehingen with his daughter Mailin, fellow managing partner Stefan Heldt and the latter's son, Fynn. "The next generation is waiting in the wings."

Wille & Dulies GmbH will use the new cranes for the assembly of precast concrete parts, the erection of mobile phone antennas and the construction of overhead lines and transformer stations, among other things. "In addition, there are jobs in the wind power sector, on which the new 5-axle cranes will assist the big ones," Stefan Heldt reports.

The LTM 1150-5.3 replaces an older LTM 1130-5.1 in the company's fleet. "We were very satisfied with the older 130-tonne crane, so it made sense to procure Liebherr's successor model, which has a telescopic boom that is 10 percent longer at 66 metres. It also offers significantly higher load-bearing capacities," says Dulies. The new LTM 1160-5.2 also replaces an older 130-tonne model. Heldt explains: "The LTM 1160-5.2 offers very good lifting capacity. In addition, its 2.75-metre wide chassis is a great advantage on the mostly narrow roads in our rural catchment area."

The family-owned companies Wille & Dulies Krane GmbH in Flensburg-Harrislee and Wille Krane GmbH in Kiel have seven locations in northern Germany. Equipped with mobile cranes with up to 450 tonnes lifting capacity as well as mobile construction cranes, they are experts in heavy and special transport, salvage and company relocations.