They cut everything to pieces: car bodies, steel girders, entire ships and aircrafts. Scrap shears are the choice when it comes to crushing iron and other metals. One of the premium manufacturers is Genesis GmbH, which produces scrap and demolition shears of different sizes in Memmingen (Southern Germany) for users in Europe, Asia and Africa. For the new mobile scrap shears, which has a high cutting force even with a comparatively small carrier, once again turned to Liebherr-Components Kirchdorf GmbH for its robust, compact and durable hydraulic cylinders. 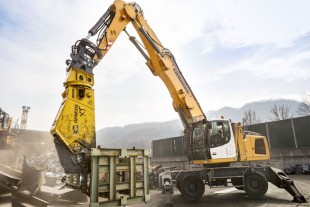 The steel groans briefly, but it does not resist, as the scrap of the scrap shears digs into the arm-thick bearers and bites forcefully. Each time the excavator dismantles the once so stable component on a scrap yard in Bergamo, Italy, the excavator takes it to its final destination - recycling. What makes this effective scrap processing possible is the combination of a powerful mobile scrap shear (a GXT series model by Genesis) and the LH40 material handling machine by Liebherr. Whereas previously, this kind of work demanded huge machines and tools, the new generation of mobile scrap shears by Genesis offers a cost-effective and powerful solution in a more compact design. At the same time, such carrier machines can reach an even higher cutting performance. The GXT shears are of a shorter and therefore a lighter design, and can be used wherever large volumes of material need to be cut within a very short time. Hydraulic cylinders are the key components for the operation of these new tools. Core requirements on this component in this application are load bearing capacity with high pressures up to 345 bar, along with the capacity to achieve high cycle speeds.

Genesis found exactly what they were looking for close to its European head office in nearby Kirchdorf. There, Liebherr Components annually develops and manufactures around 50,000 hydraulic cylinders, shock absorbers and system solutions. Only six months after the collaboration started in 2014, the first ready-for-use prototypes were produced. The cylinders have been successfully deployed since 2015.

"For the latest development of the GXT series, all components and suppliers were put to the test. Liebherr-Components Kirchdorf GmbH won us over with their decades of know-how in the field of construction machinery, the high-quality manufacturing processes and service provision," says Roman Pohl, Director of Operations at Genesis GmbH. "Together we tackled the issue of how a hydraulic cylinder should be designed so that it fit into our scrap shears and fulfilled its purpose." This was a necessary step since the design of the GXT series had already been determined by the time the joint project began. "Our task was to design the new cylinder in such a way that it not only works reliably in rough environments, but also that it fits into the new shearing concept at the same time and makes optimum use of the forces," says Sven Weckwerth, Sales Manager for hydraulic cylinders at Liebherr. For that, the load centre was set closer to the quick-hitch and the shear layout was modified thoroughly to achieve more cutting power. The Liebherr hydraulic cylinders come with their distinct advantages. For the Genesis shears, the specialists at Liebherr in Kirchdorf developed a cylinder family that can be used without welding seams in order to achieve maximum stability.

The massive free-form forgings, instead of a composite rod, are precision-machined at the Liebherr site. The connection between piston and rod is also particularly resistant thanks to a hoop stress system developed by Liebherr and is the ideal connection for the occurring loads compared to conventional fastening systems. For maintenance and repair (for example, when exchanging wearing parts such as seals), the pistons can be easily removed in the usual way.

"There are many cylinders that can withstand with our high pressure requirements, but not with the high cycle rate. Liebherr's expertise extends both to the design and development as well as to the manufacturing competence,” says Roman Pohl of Genesis.“ The basic material is just as crucial as our own machining and production of the cast and free-form parts, which offers our customers added value." 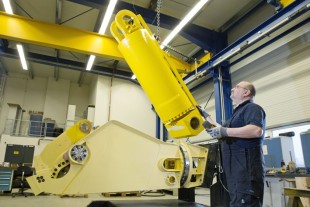 No running up the red flag

Since scrap shears are often used at key points in time-critical projects, a failure from an economic perspective is dramatic. Therefore, the components used must be able to keep on functioning smoothly for years. In the event of any servicing need, quick replacement is a top priority. Liebherr provides reliable supply for Genesis and, in turn, to Genesis' customers. " This is a strong argument that we can put forth to our users," says Martin Wirth, Director of Sales and Project Manager at Genesis for AOM ROTTAMI S.p.A. This explains why AOM ROTTAMI S.p.A. has, for many years, been using various Liebherr handling machines. In a traditional scrapyard, construction materials such as disused cranes, concrete mixers or even tanks are crushed using stationary scissors. In order to equip them more easily, AOM ROTTAMI S.p.A. was looking for the possibility of coarsely breaking down the large parts in advance. The solution was an additional mobile demolition machine, in which the attachments could be changed quickly. "The combination of Liebherr material handling machines and Genesis scrap shears with integrated Liebherr hydraulic cylinders was the ideal answer to the challenge facing the customer," says Martin Wirth.

All models of the GXT now feature built-in Liebherr cylinders. For this, Liebherr-Components Kirchdorf GmbH and Genesis GmbH have developed twelve cylinder types based on the same scalable design principle. Meanwhile, Genesis has exported the successful new cylinder concept to its parent company in the USA: Genesis Attachments LLC. Here too, Liebherr Components supplies the factory in Superior (Wisconsin) with hydraulic cylinders. Security of supply is guaranteed by Liebherr through a local consignment warehouse. This is a key factor, since delivery times of around three months are the rule for castings and free-form parts. "We coordinate closely and plan according to the needs," says Sven Weckwerth. "In this way, we achieve delivery times of zero weeks, since the manufactured products are available in sufficient volume directly from the US warehouse."