For exactly one year the Liebherr Plant in Ehingen has been delivering the new compact crane, model LTC 1050-3.1. The innovative mobile crane with a lifting capacity of 50 tonnes has proven extremely popular on the market and has positioned itself superbly. Around 60 machines of this type are now operating on building sites around the world. The main new features on this compact all-terrain crane, which is designed for use in industrial buildings and constricted areas, include the VarioBase® variable supporting base developed by Liebherr. But the heavy duty jib, hook traverse and the optional telescoping driver's cabin have also proven to be valuable features in practice. 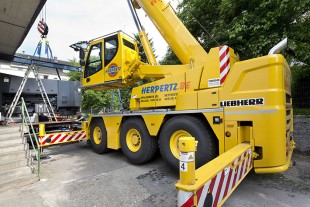 If we look at the new LTC 1050-3.1 working on a very wide range of crane jobs in the most diverse situations, the first question that springs to mind is how we previously managed without VarioBase®? An interfering pillar, a channel in the floor which might be unable to withstand the pressure of the crane's outriggers, little space to a neighbouring wall or simply heaped building materials which limit the set-up area for the crane – generally the variable crane support, which enables each outrigger to be positioned individually, provides a solution to space problems for assembling the crane. 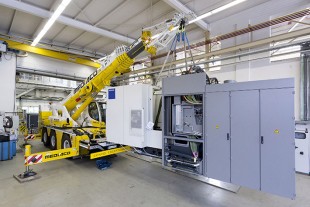 One of the classic jobs for these compact or city cranes is installation work on large machine tools in industrial buildings or in areas with a limited set-up area. Transport and recovery contractor Herpertz, which has branches in Belgium and the Netherlands, used its new LTC 1050-3.1 to relocate a mechanical engineering company in Cologne. Machine tools with a weight of up to ten tonnes had to be hoisted off a ramp and loaded. The crane showed the value of its compact dimensions when passing through the rear yard at the customer's site through an access point just three metres in height. The crane was only able to find enough space for its subsequent assembly on the loading ramp thanks to VarioBase®. It was only possible to fully extend one of the four outriggers. The other outriggers were extended between 65 and 80 percent due to a staircase and a wall.

An indoor job in Oberkirch in Baden-Württemberg also featured a minimal amount of space. French crane contractor Médiaco has an LTC 1050-3.1 stationed at each of its two new branches in Freiburg and Rheinau. One of them was sent to a mechanical engineering company to install a machining centre. In addition to a restricted assembly area, the main problem with this job was the low ceiling height of the industrial building. This tool changer, which weighs in at around 16 tonnes, could only be positioned by using the so-called hook traverse installed on the heavy duty jib at an angle of 20 degrees. With the crane in this condition, the load can then only be moved by telescoping, lowering and slewing the boom. However, the hook level was around one metre higher than if the standard hook block had been used without a hoist limit switch. 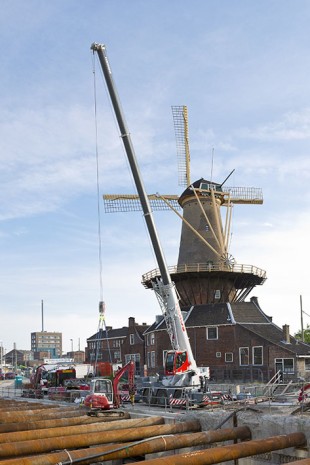 Taxi crane with a view ready to hoist quickly

For many months a large construction site in Delft in the Netherlands has been the workplace of the LTC crane operated by Heros, a crane contractor based near Rotterdam. Work has been ongoing since 2009 in the town in southern Holland to move the railway tracks underground whilst at the same time erecting a massive underground car park. The construction trench is over 20 metres deep and extends for several kilometres through the town. The three-axle Liebherr compact crane shows the full range of its strengths on the edge of the trench, moving quickly from one site to the next. Along the narrow track at the edge of the construction site, the 50-tonne machine also proves how flexible it is between stored building materials and always finds plenty of assembly space thanks to its variable support. The outriggers are always extended as far as possible towards the trench, in other words towards the load side.

In addition to loading work on this major construction site, the city crane is primarily used for moving construction material and machines in and out of the trench. Crane driver Ruud Meesters is delighted that his crane features the telescoping lift cabin. Whether he is hoisting awkward material or an eight-tonne excavator into the trench, he slides his driving cabin forward to little to give him a perfect view of what is going on at the base of the site at all times. This additional safety feature pays dividends when threading the loads between the massive support pipes in the trench. "The crane works perfectly here", is how Ruud describes his work in Delft. 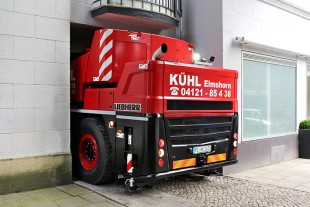 The first job tackled by the new LTC 1050-3.1 purchased by Kühl GmbH based in Elmshorn enabled the compact crane from Liebherr to show off all its strengths whilst also saving the end customer an enormous amount of money. Loads of up to 3 tonnes had to be hoisted to install the balcony in Hamburg. Thanks to its compact dimensions, the LTC 1050-3.1 was able to drive through a narrow, low access point into the internal yard of the residential unit. The alternative would have been to install the balcony from outside using an LTM 1200-5.1 with a double folding jib. For this purpose the narrow street in Hamburg would have had to be completely closed and some of the bus services which use it would have had to be diverted.

So Liebherr has created a compact, versatile and flexible power package in the form of its new LTC 1050-3.1. Whilst some of its dimensions are even smaller than its predecessor, its lifting capacity has been increased by up to 15 percent. The fact that the drivers have only praise for the way in which the compact crane handles and works provides ample confirmation for the work done by the engineers in Ehingen. The drivers are also satisfied with the handling of the three-axle crane on the road. As Kevin van der Kop, the crane driver from Herpertz, put it so well after arriving at the site in Cologne, "It drives like a dream."