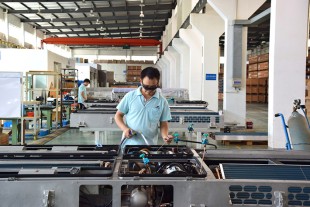 The Wuhan Metro Line 8 is an elevated and underground urban metro system, operated by Wuhan Metro Co., Ltd. It links the northern Hankou with the southern Wuchang area and is considered a backbone traffic line in Wuhan, the province’s capital city with a population of around 4.3 million people.

Liebherr’s HVAC system was especially designed and customized according to Wuhan Metro’s technical specifications and standard. It controls the cars’ interior temperature and humidity and it provides a comfortable environment for the passengers. One part of each system includes two roof-mounted packaged saloon units located in each car, supplying and returning air from underneath. The other part is a ventilation unit in the driver’s cabin, absorbing air after treatment from the neighboring saloon units.

This contract is again a significant achievement for Liebherr-Transportation Systems, and demonstrates the Chinese market’s confidence in products and systems made by Liebherr.