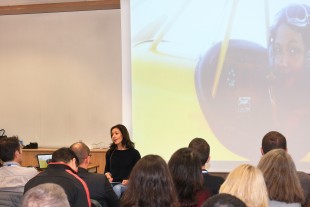 As part of the policy for people with disabilities adopted by Liebherr-Aerospace Toulouse SAS, this week was organized around three activities which gave people a better understanding of the difficulties encountered by people with disabilities: literacy workshops on French sign language, conferences hosted by Dorine Bourneton and the sale of organic products by an ESAT facility.

Over 44 staff members attended the literacy workshops on French sign language organized by the group "Autrement Dit". This event raised the level of awareness among participants of the French sign language by introducing them to the basics of visual-gestural communication.

Dorine Bourneton, the first paraplegic woman to have obtained a pilot's license and practice aerobatics, came to talk to us about her moving story. Throughout her story she showed that it is possible to make a living from passions, even beyond a disability. A hundred people attended this moving personal testimony on her campaign for the recognition of disabled pilots.

Nicolas Guillorit, Quality Manager, stated: "The conference hosted by Dorine Bourneton left me speechless. Despite her apparent shyness, once she puts on her pilot's jacket and takes control of her CAP 10, Dorine becomes a different person, a keen and passionate individual who lives life to the full and makes her dreams come true. Her story is poignant and filled with emotions using images that we can only dream of. In short, a wonderful lesson on life".

The sale of organic products by ESAT facility

ESAT (Etablissement et Service d’Aide par le Travail) l’Arche en Pays Toulousain, which is situated in Blagnac, a suburb of Toulouse, and whose aim is to integrate people with disabilities into the mainstream labor market, came to sell organic products such as fruit and vegetable baskets to the staff of LTS. This initiative is a way of acknowledging and promoting the employment of people with disabilities.