In the Mining product segment, Liebherr achieved revenues of € 964 million, which means a decrease in sales by € 105 million, or 9.8 %, compared to the previous year. 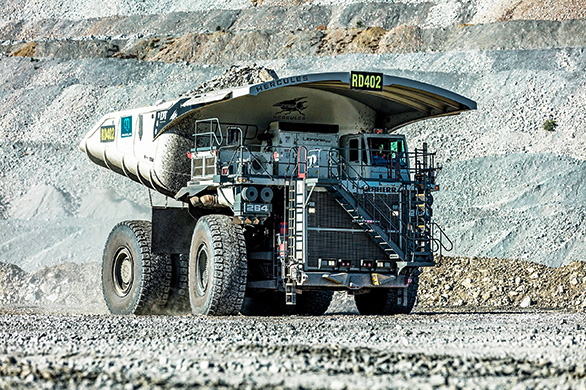 Despite the industry’s usual resilience, the global mining industry experienced a downturn. This resulted in losses in revenue and profits in the resources industry. It, however, also made the industry focus on future-looking trends, such as increased digitalisation, autonomy and automation.

The development of revenues in the Mining product segment mirrored that of the global market. Business in the core region of Asia and Oceania remained stable, driven by the strong Australian market as well as Mongolia. Developments in Africa and the Near and Middle East were positive. The non-EU countries witnessed a decrease, following a decline in sales in Russia. Sales in North America and Central and South America went down.

Thanks to its decentralised network of suppliers, warehouses and Reman centres, Liebherr customers have enjoyed a high level of availability of parts and services throughout the year.

Liebherr reached important milestones in the course of 2020. The crawler tractor business delivered the 100th unit. Liebherr also celebrated the production of the 1,000th mining excavator from the manufacturing facility in Colmar (France).

Research and development remained of high importance. New Tier 4 engine configurations were introduced for the PR 776 crawler tractor and for the R 9100B, R  9150B and R 9800 excavators, to match new emissions regulations standards. A new digital product suite, “Operational Excellence”, was introduced in the first ultra-class excavator model including truck loading assistant, performance monitoring, application severity and operational conformance features. The mining equipment portfolio also grew to include the HS 8300 dragline, one of which is already in operation in Brazil.

A highlight was the commissioning of the T 236 diesel-electric truck at the VA Erzberg iron ore mine (Austria). When connected to the overhead power lines in trolley mode, the full power capacity of the electric wheel motors of the T 236 can be translated into speed on grade while the diesel engine idles, thus reducing emissions and fuel consumption. The first D9816 engine retrofit option will be commissioned in 2021 on a T 284 mining truck. The mining truck business also developed a new 305 tonne truck, the T 274.

For 2021, Liebherr expects the mining industry to recover. Major technology trends such as digitalisation, autonomy and zero emissions will be a focus of research and development activities.